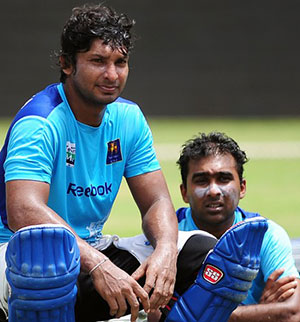 Kumar Sangakkara and Mahela Jayawardene failed to inform Sri Lanka Cricket officials and the chairman of selectors Sanath Jayasuriya that they intended on retiring from T20Is after the ongoing ICC WT20 tournament. Jayasuriya and the cricket board found out from the media, which has upset them and has forced them to turn to the media to express their grievances.

Jayasuriya has called it "highly unethical" and says he is "very let down by them."

Could he have forgotten how Jayasuriya the cricketer undermined the selectors numerous times and used political clout to get in after the selectors dropped him? The word ‘ethics’ should never come out of his mouth.

What is evident from this latest fiasco is that the two senior players, two all-time greats of Sri Lankan cricket, do not think much of Jayasuriya or the other political appointees at the board. It is yet more evidence of a broken system, where the players may prefer minimal contact with board officials who reward themselves with raises, but are currently in the midst of a contract standoff with the players, whose wages they want to reduce.

When two of Sri Lanka’s best cricketers chose not to let the board or the selectors know of their retirement plans in advance, it does not cast the players in terrible light. It perhaps tells us that the players have no regard or respect for these unscrupulous types — men who have overseen millions in losses and were responsible for the SLPL embarrassment.

If anything, going by the comments on these pages and on social media, Sri Lanka’s fans are mostly behind Sangakkara and Jayawardene, and have even gone on to criticise the journalist who first broke the story, who they claim is doing the bidding of SLC officials with his negative narrative of events.

Sri Lanka’s Daily Mirror, which first published the news in an article by its sports editor Channaka de Silva, who last year accepted an award by the controversial SLC administration at the SLC Awards, called the move by the players an "ultimate insult" to the board, which he said was the players’ "mentor for than 15 years."

He went on to cite Sangakkara’s Cowdrey Lecture as an example of misconduct, calling it a "scathing attack" on board officials, before claiming that not informing the selectors is a "damaging setback" for Sri Lankan cricket because the selectors could not prepare for the future, for a format that Sri Lanka plays very few matches in annually, and has also insinuated that Jayawardene chose to announce his retirement to an Indian publication over his own for financial gain.

I'm really sad & disappointed to hear what's been in the papers back home. Why do people go out of their way to make things harder for us??

"I’m really sad [and] disappointed to hear what’s been in the papers back home," Jayawardene wrote. "Why do people go out of their way to make things harder for us?"

Is it not more damaging for Sri Lanka and at the same time unethical when board officials turn to the media to express their dismay over players’ actions, causing mental anguish to key players during Sri Lanka’s WT20 campaign? Oh, the irony!