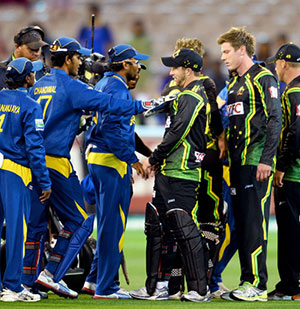 Thanks to rain and some great batting conspiring to set up a tense finish, the final game of the tour came down to a dramatic end. A boundary being the difference between a chance of a series victory in Australia lost and Sri Lanka’s only trophy of the tour. Of course, how good would a tense finish be without some tension on the field?

You may have already seen the footage. Half of the Sri Lankan team congregating at the top of Thisara Perera’s run-up, Glenn Maxwell (doesn’t he remind you a bit of Milo Ventimiglia/Peter Petrelli from Heroes?) voicing his displeasure, the final ball and all the chatter that followed. Depending on what flag you fly, you saw it differently. Australians saw an over-the-top Sri Lankan reaction after quite a significant delay before the last ball, and Sri Lankans saw their players hitting back at some unnecessary talk.

It was apparent that the conference between Mahela Jayawardene, Lasith Malinga, Angelo Mathews, Nuwan Kulasekera and Perera took longer than should have been allowed by the umpires, and it was definitely the umpires’ call, and solely their fault for not putting a stop it. Maxwell should have known better than to shout and gesture at the fielding side, asking them to get on with it. Mathews and Jayawardene responded with probably a bit much, and the fact that it continued on to the post-match handshakes was definitely unnecessary. It had little to do with either side being sore losers or bad winners.

What’s wrong with a little emotion and passion? Cricket is thought of as a gentleman’s game, despite so much evidence to the contrary in the modern game, but surely the added spice of some sledging and animosity isn’t a bad thing? There is a big difference between what transpired between Australia and Sri Lanka and the Shane Warne-Marlon Samuels Big Bash incident. Words and pointed fingers are a very different addition to the game, than physical contact and bats being flung around. Sure, there’s also the question of what example does it set for the kids, for future cricketers. Kids these days have more adult role-models than 22 sportsmen in colourful uniforms, and if you think your kids are shaped more by those strangers on the screen than by the words and actions of yourself and other adults in their lives, well, you’ve got bigger problems.

Sri Lanka have been termed the "nice guys" of international cricket for decades. It is a weakness to some, while to some others it’s a badge we wear proudly. Sri Lanka did have Arjuna Ranatunga, and under him we’ve had our fair share of on-field spats, yet Sri Lanka are reputed for upholding the spirit of cricket. However, the outgoing skipper Jayawardene, considered by many to be an all-round nice guy, tends to give back what he gets — almost without exception — and that aggression will likely be passed on to Mathews and the younger guys coming through. But the real gentlemen of the game still make-up a great part of the sport, and they do exist. Mike Hussey, who is unlikely to get involved in such an ugly on-field incident, comes to mind.

Applaud the gentlemen and the nice guys, and do speak great words of praise about how they carried themselves on the field, but also save some love for the ones who get really fired up. The bowlers who give batsmen a send-off, batsmen who won’t back down from some short-pitched bowling, the close-in fielders who give batsmen an earful — they all do add something to the game; plenty of excitement, and, sure, the occasional facepalm moment. It could be that they are trying to gain some psychological advantage, or because they’re fired up after bowling a dot-ball to win the match, or it could just be the passion of battling it out for one’s country, but it makes for some great viewing and super-charged cricket. Regardless of what anyone thinks of those scenes in Melbourne, and no matter who we think was responsible, common sense and sportsmanship prevailed.

"I went into the Sri Lankan rooms after, and they apologised for going over the top. All good," Maxwell tweeted after the match, and later he wrote: "Just to clarify… I apologised to Mahela and SL players as well. I have a good friendship with Mahela, and it’s gonna stay that way!"

The way the modern game is, with T20 league cricket creating an environment where players from a number of cricket-playing countries play for the same team and live together, strong bonds are built. Tensions may rise on the field, but if they ever get a little out of hand, it’s highly likely that there will be apologies and handshakes afterwards. As long as that is the end result, it’s fine by me to keep the fires burning on the field.