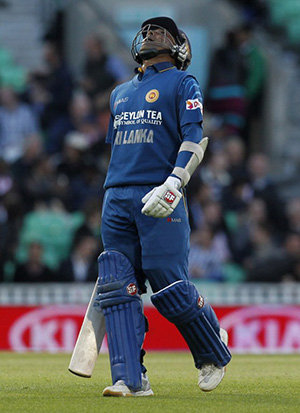 67 all out. It’s hard to wrap your head around that one, especially if you’re a Sri Lankan fan. Just a day before, we were celebrating the team’s demolition of England, when they bowled them out for 99 at Durham, but we’re now left reeling after a serious thumping that saw Sri Lanka dismissed for their third-lowest ODI total in history.

Forget statistics and past performances. Sri Lanka today needs one of its senior batsmen to bat lower in the order, and be willing to work hard when the top order is blown away too soon.

While Mahela Jayawardene may have excelled as an opener in recent times, his record when not playing in batting-friendly conditions is abysmal, and his poor technique against the moving and rising ball well document, so it is foolish for anyone to expect him to be the next Sanath Jayasuriya or Tillakaratne Dilshan — a middle-order batsman transformed into a pinch-hitting opener.

Should we expect Dilshan or Kumar Sangakkara, who have been successful in their current positions, to move down the order to add stability to the brittle line-up? Or should Jayawardene finally accept that number six or seven is his position in ODIs?

Over the last 12 months, Jayawardene has averaged 20.71 batting at four. He has made one ODI hundred in the last two years. Perhaps a more prudent option than doing away with Jayawardene altogether would be the introduction of a grafter, a patient batsman with a sound technique (such as Kaushal Silva), to bat at number six in the ODI side. The World Cup in Australia and New Zealand is on the horizon, and Jayawardene’s experience will matter there and Sri Lanka’s batting will be tested.

Sri Lanka have a long history of batting collapses, regardless of pitch conditions, and have in recent times found themselves being a team in perennial transition due to the number of players being tried and discarded too swiftly. Young players are often forced to prove their worth immediately and are given only a handful of games to do so, while players such as Chandimal and Jayawardene, whose skills have been talked up since their school days, appear indispensable.

Where is Upul Tharanga? Compare his achievements with others who have been fortunate enough to be a few years younger than the left-handed opener with 13 ODI centuries, but continue to play without results to justify their place. Like Tharanga, many have come and gone — Tharanga Paranavitana, Michael Vandort, Malinda Warnapura, Angelo Perera, Dimuth Karunaratne, Mahela Udawatte and Dilruwan Perera come to mind. The fact that none of these players secured a place tells us that either most of Sri Lanka’s best domestic talent are rubbish at the international level, or we have a dysfunctional system.

Will Thirimanne, who has been asked to open in England at the expense of Kusal Perera, not be batting where he would be more successful at (perhaps at number four), and instead be discarded? He has had a string of failures in the limited overs series in England, but since he has been appointed vice-captain, the selectors may want to avoid the embarrassment that they faced when Chandimal had to be similarly dropped at this year’s WT20, which could buy Thirimanne more time, but he can’t escape the inane eventuality of the Sri Lankan logic.

When the selectors someday understand that consistency is not required from opening batsman in today’s limited-over game, you may find them truly giving more than Dilshan a license to attack. Asking a young dasher to take risks against the new ball, and then axing him for not scoring big regularly is not giving him a free license to take the attack to the opposition. It puts pressure on the player and allows doubt and worry to creep in. Kusal Perera deserved a prolonged run, but was dropped for the first three ODIs against England. Thirimanne was forced to play a role that he is not accustomed to, in tough conditions. Sri Lankan logic.

Jayawardene has tasted success as an opener, but so have Tharanga and Perera. The 37-year-old must understand his limitations and heed his team’s needs. Sri Lanka needs his ability, experience and intelligence to bat lower down. The former captain’s ability to manoeuvre the ball into gaps, his competency against spin and slow bowling, coupled with a cool head on his shoulders, makes him an ideal candidate to bat with the tail at the end of the innings. Even at number four, he often finds himself tested by new-ball attacks inside the first 20 overs of an ODI.

While his nation needs him to play the role of Arjuna Ranatunga, who for many years held the batting together at number five, the ageing Jayawardene, who if one recalls was promoted to number three at Sangakkara’s expense at the recent WT20, is determined to end his career as a limited-overs opener.

Exactly why, no one knows for sure.