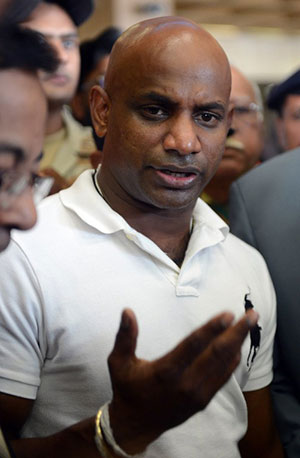 As Sri Lanka prepares for its new selection committee to take up the reigns, under the chairmanship of Sanath Jayasuriya, speculation continues to mount over who will be selected for the upcoming year. Below is a list of 15 players that should be selected for the Test side. A mix of youth and experience will assist Sri Lanka groom youngsters and still remain competitive. Unfortunately, Sri Lanka will only play a handful of Tests this year. Nonetheless, this will be the perfect opportunity to blood youngsters.

Dimuth Karunaratne justified his selection during the otherwise disappointing Test series against Australia. Having played all three games on seaming and bouncing wickets, his average was a lowly 23. However, he showed that he had the mental make-up to take on hostile fast bowling on seamer-friendly pitches. His highest score of 85 came in the Sydney Test, where Sri Lanka were pushing for victory. Along with Mahela Jayawardena, Karunaratne took the team past Australia’s lead and set a platform for victory. Despite eventually losing the game, his innings showed character and determination.

Tharanga Paranavitana began his career in promising fashion, but he has faded away of late. He last made a century back in 2010. Since the series against New Zealand at the end of 2012, he has lost his place in the team to Karunaratne. Sri Lanka appear to be lacking in the way of traditional Test opening batsmen. Tillakaratne Dilshan, on the basis of his age and recent form, has been omitted. Even though he scored a century against Australia in Hobart, Dilshan has failed to provide the steady platform Sri Lanka have required. His recent record shows a player of hit-or-miss proportions. Paranavitana, a slow and steady opener with Test experience, can provide stability at the top alongside Karunaratne.

Kumar Sangakarra has made the number-three spot in the line-up his own with a stellar couple of years with the bat. He did have a quiet series against Australia and New Zealand, but any selection panel will find it difficult to drop this world-class player. Although Sangakarra is also getting on in years, his presence adds undisputed value to the side and balance.

Mahela Jayawardena or Lahiru Thirimanne — a tough call to make. Jayawardena has been a superstar for Sri Lanka with the bat and barring his second stint as captain, he has been a standout in that avenue as well. However, his record with the bat over the past few years has been poor, which then leads to questions over his selection. Yet his record does provide him with the luxury to decide on when he should hang up his boots; perhaps that time is near. Thirimanne, on the other hand, had a poor start to his Test career after being thrown into a makeshift opener’s role. His second wind came as a middle-order batsman against Australia, where he top-scored with 91. His form in the 50-over format has pushed him to the fringe of a Test spot and he should occupy the spot vacated by Jayawardena, if and when he retires.

Dinesh Chandimal has promised much with the bat and should take the place of the ageing and disappointing Thilan Samaraweera. While Samaraweera has been a stalwart of Sri Lanka’s middle-order, his recent form has let him down. Chandimal is certainly a talented batsman and deserves a prolonged run in the Test side. Averaging 40 in Tests with four 50s is certainly a sign of a capable player.

Angelo Mathews has been handed the captaincy of the ODI and T20 teams, and despite my backing for split captaincy, he now should be given these reigns as well. Reducing his workload with the ball will certainly assist him in improving his scores. Mathews will provide the middle-order with the much-need experience they could very well lose in the next year.

Kushal Perera showed that he is a capable batsmen and a competent gloveman. While Sri Lanka appeared keen to use Chandimal as a wicket-keeper ahead of Perera in the ODIs against Australia, Chandimal’s batting is more valuable and he should play solely as a batsman.

Suranga Lakmal has had a stop-start career as a result of injury. He, however, brings both pace and swing to the table, which is something Sri Lanka is lacking in the bowling department. Lakmal has shown promise and should continue to be given a prolonged run.

Nuwan Pradeep could very well inhabit the vacuum created by Lasith Malinga’s Test retirement. He bowls with pace, consistently around 140 kmph, and has shown that he can swing the ball. He too has had a stop-start career due to injury. If Lakmal and Pradeep are both fit, they could very well form a potent attack.

Rangana Herath is Sri Lanka’s number-one Test bowler for no other reason than his ability to pull Sri Lanka back into games that they look to be well out of. While Herath may be getting on in age, the selectors should continue to play him, provided his fitness holds up.

Chanaka Welegedara has been one of a few who has consistently performed. While having not had a superstar career, this left-arm, medium-fast bowler offers variety and is often able to bottle up an end and build the pressure. He is reliable and capable of putting in the hard yards on unresponsive subcontinent wickets.

The above 12 players should be given priority selection for the Test team, while Shaminda Eranga, Angelo Perera and Suraj Randiv should also be considered. While SLC will have the option of bringing in other players into the 15-man squad, the selectors must look at selecting this group of players for the upcoming year, as it allows Sri Lanka to groom youngsters while still remaining competitive.