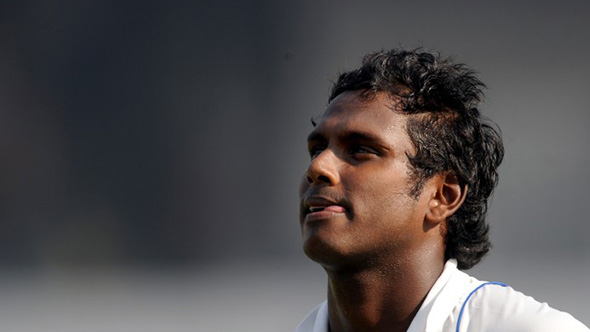 The captain in waiting Angelo Mathews may not be handed the reigns in all formats. © AFP

Yet another disappointing tour to Australia will come to an end shortly. After the humiliating three-nil whitewash in the Test series, Sri Lanka put on a stronger showing in the ODIs, but failed to secure the series. After the two-match T20 series, the team’s focus will turn to the naming of two new captains — the sports minister confirmed that Sri Lanka will use separate captains for Tests and limited-over matches.

It is a good move, taking into account performances over the past two years. The ODI side maybe in good stead, but in the Test arena though, success has been harder to come by. Only four Tests in the past two years and a single series has been won. Unfortunately these victories have come mainly at the hands of the old horses, while younger players have performed, but their returns have not been headline-worthy.

Since his debut, Angelo Mathews, the talented all-rounder, has been tipped to lead Sri Lanka. Sadly, Mathews has not quite lived up to all the hype, leaving many wondering whether he really is capable of leading the team. Averaging 39 and 34 with the bat in Tests and ODIs respectively, and 70 and 36 with the ball in Tests and ODIs, Mathews has far from justified this billing as Sri Lanka’s ‘captain in waiting’.

Sri Lanka Cricket made the mistake of putting all their eggs in one basket with Mathews, and are now being forced to endure the fallout. Banking on him taking over the captaincy has meant that the selectors failed to have a backup plan, and they now find it difficult to justify his appointment as captain.

The selectors have little choice but to move forward and take a gamble. Appointing two captains — one for ODIs and T20s and another for Tests — is an approach other teams have adopted. Australia uses it, with George Bailey taking over at the helm of T20s, leaving Michael Clarke to lead in the other two formats. While England have Alastair Cook captaining the Test and ODI side, Stuart Broad oversees their T20 team.

So what should Sri Lanka do? Appointing Mathews as Test captain, while taking a punt on Dinesh Chandimal as the ODI and T20 skipper isn’t such a bad idea. Both players have fairly similar records, but unfortunately for Mathews he has played over a longer period of time, and has not been able to up his performances. Splitting the captaincy would reduce pressure on Mathews and the other captain as well, while also giving the selectors more options in case one was to fail.

With the 2015 World Cup in mind, the selectors must go one step further, and look at rebuilding the entire team around the newly appointed captain. This would mean taking the tough decision of encouraging the likes of Mahela Jayawardene, Kumar Sangakkara and Tillakaratne Dilshan to retire from the shorter formats. Such a move will not be initially welcomed by their supporters, but it is one that must be seriously considered, taking the long-term future of the team into account. By the time 2015 rolls around, the senior trio will be in their late 30s. Furthermore, barring Sangakkara, the other two have not been in the best of touch, and on form they do not always warrant immediate selection. In Mathews, Chandimal and Thirimanne Sri Lanka possess three players that could potentially replace the three outgoing players as the mainstays.

While the fast bowling ranks are sparsely populated, there are still options available. Thankfully for Sri Lanka, spin bowling does not appear to be an issue, as slow bowlers continue to sprout up around the country. The country is also fortunate enough to have a host of fringe players, and over the next two years, in the lead-up to the World Cup, they can rotate them. While experience will be lacking in this team, the 2013 Champions Trophy can be used as an opportunity for the selectors to test out a younger team on the world stage.

Test cricket has been far from prosperous for the Sri Lankans, and they are left with little choice but to take baby steps in the five-day format. This transition must be a far more gradual one under the new captain, with the aim of blooding younger players.

Sri Lanka’s transition phase will not be an easy one, however, it is an opportunity for the selectors and the team to start afresh.