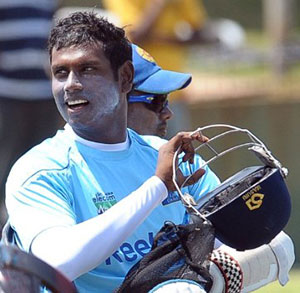 With over 1613 runs scored, including a record-equalling eight centuries, and only 19 wickets taken on what was a dead Galle wicket, the first Test between Sri Lanka and Bangladesh proved to be nothing more than batting practice for both sides.

Unfortunately for Sri Lanka’s newest and youngest Test captain Angelo Mathews, the match was a baptism of fire in a very different sense. Faced with a wicket flatter than the Southern Expressway, and bowlers who lacked any real penetrative prowess, the new skipper had his work cut out for him.

Coming into this series, many questions hung over the young captain, with some questioning whether his Test record justified his appointment as captain, let alone his automatic selection in the Test side. Of course, a comfortably won series would go some way in silencing the critics. Unfortunately, as cricket continues to show, things do not often go to plan, and Mathews was given a tougher than expected welcome to the head of the pack.

Winning the toss and racing to a mammoth 570 runs inside one-and-a-half days was certainly the perfect start for the skipper. The fact that his deputy Dinesh Chandimal and Lahiru Thirimanne both scored their maiden tons would have been a pleasing sight. While Kumar Sangakkara’s 31st (soon to be followed with his 32nd) ton was just a reminder that Mathews still had the old horses to back him up.

On a personal front however, Mathews will feel he threw away a golden opportunity with the bat, when he gave a simple return catch to Abdul Hasan on 27. The skipper has been guilty of not placing a price on his wicket, and once again this proved to be the case.

With all due respect to Bangladesh, faced with a daunting score of 570, many would be forgiven for assuming this match was virtually over — Galle has been Sri Lanka’s fortress for years now. A sizeable first innings score, followed by wickets shared around by the spinners, was how it tended to play out for the hosts most often.

They had ticked the first box. For Mathews, his first Test in charge had so far been pretty straightforward. Unfortunately, after much uncalled for criticism over the Galle wicket in the recent past, Jayananda Warnaweera felt a flat track was the answer. However, Mathews did say that the team and the management had a "bit of chat with the curators", perhaps suggesting that the team’s input was sought in preparing this featherbed.

This batting paradise, alongside Sri Lanka’s poor bowling and an impressive performance by the Bangladeshi batsmen, meant Sri Lanka were halted in their attempt to run through the opposition. The captain was suddenly up against it, the spin-friendly wicket was no longer there, and his bowlers would now have to find ways to pick apart a solid looking Bangladeshi line up.

With wickets falling at irregular intervals, the over-reliance on spin could have been excused. Thankfully, Mathews recognised the fact that he had four frontline bowlers, and, while still relying heavily on Rangana Herath, he spread his work across the board.

While on the field, one of the key tasks of the captain is to recognise the weaknesses of his opposition and assist his bowlers in exploiting those weaknesses. On an unhelpful wicket though, there was very little for him to work with, but Mathews showed that he was not afraid to try new things, although it did not help that his bowlers erred in line and length on numerous occasions, failing to sustain any pressure.

Since the retirement of Muttiah Muralitharan (over three years ago), Sri Lanka has often been guilty of being overly defensive. With a score in excess of 550, Mathews had the luxury of utilising close in fielders for most of the innings. He did this, while also quickly recognising the fact that the wicket was not going to give him conventional modes of dismissals.

Faced with three partnerships in excess of 100, and one of those being over 200 runs, would certainly leave any captain scratching his head and looking to the skies. But credit must be given to Mathews, as he kept his cool and continued to rotate his bowlers, ensuring the hosts did not fall behind in the game and await a declaration.

As an all-rounder, it is very easy to attempt to take on more work when the game is not going to plan. However, with injury concerns, and a less than acceptable record with the ball, Mathews decided to take a back step and allow the rest of the part-timers (namely Tillakaratne Dilshan) fill in. It is a small gesture, but certainly one that indicates that he is willing to take his self out of the game in order to read the situation better.

Midway through day four it became clear that this game was destined to peter out. Despite that, Mathews stuck to his guns, and after dismissing the Bangladeshis, who had for the first time ever recorded a lead over Sri Lanka, he went about removing the deficit and posting a total. A sporting declaration by Mathews was on the cards, and taking in to consideration the flat nature of the wicket, he would have to have been careful in making one.

Ultimately, a target of 268 in 37 overs may have been a bit too much for Bangladesh to entice them, but it still gave Mathews a slight edge, with him ending the match as the captain on the offensive.

Overall, if Mathews was to be marked out of 10 on his first performance as captain, it would be safe to say he scored a solid seven. The questionable line up — perhaps a bowler short on this wicket — and Mathews’ low score in the first innings played against him. Yet, faced with an unresponsive wicket and a below par effort from his bowlers, his tactics on the field would certainly warrant a star next to his name.