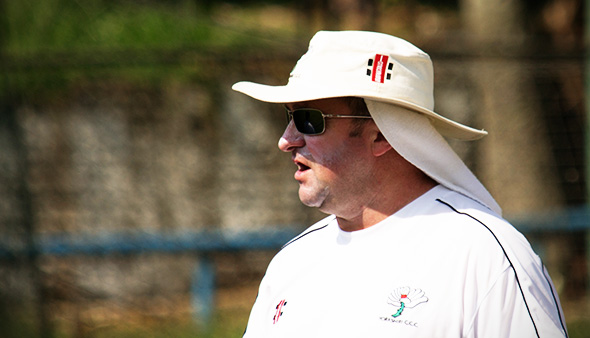 Allowing Yorkshire to train in Sri Lanka will open doors for Sri Lankans to train in England. © Dinouk Colombage

Overseeing a net session, donned in a white floppy wide-brimmed sun hat and a generous splattering of sunscreen on his face, Paul Farbrace looked every bit at home at the P. Sara Oval in Colombo. Sri Lanka’s former assistant coach is in the country currently with members of the English county team Yorkshire for a pre-season training camp.

Having left Sri Lanka in 2009, Farbrace has since joined Yorkshire as their second XI coach. With the county season fast approaching, their players have spread out across the globe in search of match practice.

"Back in England, the boys are faced with having to prepare for the upcoming season with indoor net sessions, but nothing trumps playing outdoors in match-like conditions," Farbrace said, speaking to Island Cricket last week.

The trip to Sri Lanka is not just about Yorkshire players having a hit outdoors, but it is also an opportunity for both the senior and junior players in their side to experience conditions away from home.

"To enjoy your cricket, and then to translate that enjoyment into your performances, you need to understand the world around you," Farbrace explained.

"Very often, touring teams struggle in different parts of the world because the players are taken by surprise by what they see around them. An opportunity such as the one we have been given to play in Sri Lankan conditions should not to be squandered."

With seven players from Yorkshire, including skipper Andrew Gale and a number of 16-year-olds, Farbrace hoped that this trip would expose his players to foreign conditions both on and off the field. He also believes that this opportunity is one that many of his players would otherwise not experience.

"Unfortunately, not all domestic players will have the chance to represent their team at the international level, so tours such as these give players the opportunity to compete against foreign players, while experiencing what international players do every day," he said.

The accomplished coach, who was at one time Kent’s director of cricket and a former England U19 coach, said that he would like to see the relationship between SLC and county teams continue, and hinted that this could possibly create an avenue for Sri Lankan cricketers to train in England as well.

"We now hope to discuss the possibility with the cricket board of having Sri Lankan players sent across to England to gain valuable experience over there," Farbrace said.

Sri Lanka’s dismal record in Test cricket away from home has brought to focus their inability to cope with alien conditions, especially those that assist seamers. Farbrace believes that with more exposure to such conditions, Sri Lanka can rise up in the Test rankings once more, even though they are in the midst of a transitional phase.

"People must remember that any team which has been forced to bid farewell to some of its greats, with others closing in on retirement, will experience a slump," Farbrace explained. "Australia has gone through that, and it is only natural that Sri Lanka will also.

"The likes of Mahela (Jayawardene) and Kumar (Sangakkara) will help guide both Angelo (Matthews) and the rest of the young team."

The Sri Lankan selectors have stuck with senior players in their new-look squad, but many of the new recruits are still very inexperienced. And, as of now, Sri Lanka are only scheduled to play a few Tests this year, and that too at home, which Farbrace says would "not be enough for the youngsters in the Sri Lankan team to hone their skills."

He also advocated the participation of players in tournaments such as the IPL, and urged the public to ignore the financial riches that come with such tournaments, and instead asked them to focus on the experience that their players will gain from such tournaments.

"As long as the workloads of these players are managed by the national coaching staff, there should not be any concerns by either the media or the public," Farbrace insisted.

Concluding our discussion on a lighter note, he expressed his desire to one day return to Sri Lanka.

"There are too many great memories with the Sri Lankan team to single out one, but I certainly hope to return to this wonderful country in the near future."