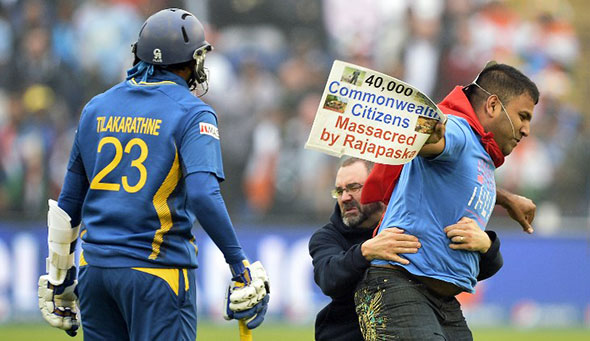 Protesters invaded the field during the first semi-final of the 2013 Champions Trophy tournament. © AFP

A game that was born from a sport played on the village greens has now turned in to a spectacle that is slowly becoming unrecognisable for the purists. Political demonstrations, bar brawls and growing corruption have all taken hold in cricket.

While the issues continue to grow, many have argued that these incidents are off-field and do not have an impact on the game. However, the semi-final of the Champions Trophy between India and Sri Lanka was marred on several occasions by spectators running on to the field brandishing flags, placards and even trying to manhandle players. While spectators invading the playing area are not a rarity, on this occasion these individuals used the opportunity to highlight their support for the banned terrorist organisation, the Liberation Tigers of Tamil Eelam (LTTE).

The England and Wales Cricket Board (ECB) and the International Cricket Council (ICC) have both been quick to criticise other countries over their security arrangements, but, having known what was in store for the Sri Lankan team, they still were unable to prevent such incidents from transpiring. As a result of the lapses in security, they allowed the game to be eventually overshadowed by political demonstrations.

Political intrigue creeping in to the game is not an isolated incident. In India, during the Indian Premier League (IPL), politicians managed successfully to influence the course of the tournament. This year’s edition saw Sri Lankan players banned from playing in Tamil Nadu, while previous years have seen Pakistani players boycotted by franchises; and all this, done on the back of political pressure.

The ICC has failed to tackle these issues, allowing for politics to reign over the sport. Decrees passed by the body, calling for a separation of cricket boards and governments, has been a whitewash over the deeper issues existing.

While matters of this magnitude continue to pose problems for cricket, the players and officials involved are also contributing to its downfall. The stars of the game today are idolised by young fans and are considered role-models, yet the behaviour of the modern-day cricketer raises questions.

Australia’s hard hitting opening batsman, David Warner, has delighted crowds around the world, however, his off-field antics cast doubt over whether or not he has a long-term future in the sport. An incident in a pub in London, an alleged altercation between him and English cricketer Joe Root, resulted in his suspension from the Champions Trophy. This followed up his highly publicised Twitter abuse aimed at two Australian journalists, which saw him receive a hefty fine from Cricket Australia.

While the fans, and former players, have been quick to lash out at Warner, his was not an isolated incident. In January this year, during a heated match between Sri Lanka and Australia, Mahela Jayawardena (a former captain) was caught on camera telling Australia’s Glen Maxwell to "F*** off". While the players were both quick to apologise after the game, the reaction by the fans left an ugly taste in the mouth. Most Sri Lankan supporters on social media sites cheered on Jayawardena’s abuse, joining him in directing their anger towards Maxwell.

A month later, the country’s premier fast bowler, Lasith Malinga, was filmed being rude, arrogant and disrespectful to a journalist outside Sri Lanka Cricket (SLC) headquarters, following discussions between the players and the board over a payment dispute. Ironically, Malinga was not only pulled up by the cricket board, but he also faced heavy criticism from the media and the public.

Similar incidents have occurred involving numerous other players, including India’s Virat Kohli, all directing abuse at opponents or spectators, none of which has seen criticism from officials. Clearly, rivalry trumps behaviour.

While the reputation of the sport being a gentlemen’s game is on the decline, it is certainly the introduction of lucrative tournaments such as the IPL that contribute to the sorry state of affairs. Cricket has been celebrated by fans all over the world as a team game, and in many cases one which the sportsmen (and women) play for the pride of their country. With the creation of domestic tournaments that offer millions of dollars to players, it is hard to see national commitments trumping the lure of immense wealth, and the sport’s reputation may have to pay for the arrogance that wealth brings.

Player biddings and sponsorship deals with pay packets in excess of millions of dollars are now the common features of any domestic tournament. In turn, the large investment in players has additionally led to the growth in corruption. This year’s IPL saw several Indian players and officials, including the BCCI President N. Srinivasan, all caught up in allegations of match-fixing. The involvement of high-ranking officials has left questions lurking as to how deep match-fixing runs and, judging by the BCCI’s financial clout, doubts remain whether or not further action will ever be taken.

Cricket will survive the ongoing drama. Football is a shining example — while possessing one of the most corrupt international sporting bodies, the game continues to flourish around the world. Unfortunately, like football, cricket is going down a treacherous path though, which will see the purists walk away in disgust over growing concerns. The ICC has the luxury of football as an example, and it must act swiftly to intervene.