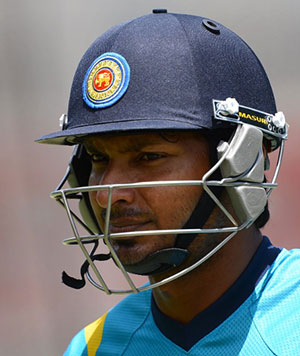 Kumar Sangakarra said his decision to play for Kandurata Maroons over the IPL franchise Sunrisers Hyderabad had nothing to do with money or pressure from Sri Lanka Cricket (SLC) and blamed cricket board officials for mishandling the situation.

Speaking exclusively to Island Cricket, Sangakarra explained that the lack of communication from SLC is what led to the confusion.

"Upon my return from the West Indies, Sri Lanka Cricket asked me to play for my home side Kandurata in the event we qualified for the Champions League. I told them that if they were able to come to an agreement with the IPL and the Sunrisers, I would be happy to do what they say," Sangakkara told Island Cricket by phone a short while ago.

The former Sri Lankan captain criticised the cricket board for failing to take any decisive action on the matter, which in turn placed the onus on him.

"I am baffled by the reports in the media claiming I was choosing money over my country — this was a simple franchise versus franchise decision," he said.

"It was my personal choice that led me to choosing to play for Kandurata."

According to Sangakarra, during the recently-concluded inter-provincial tournament that replaced the Sri Lanka Premier League, his IPL team had contacted him to notify him of his selection in the 15-man Sunrisers squad for the Champions League. With Kandurata nearing the finals of the tournament, Sangakarra said that he contacted the IPL franchise and inquired as to whether or not he was an essential player in their team. He explained that he inquired if Sunrisers would consider releasing him to play for his home franchise if he was unlikely to feature in their side. The Sunrisers management had then responded saying that he was indeed an essential player, but they could not guarantee his place in the side.

Insisting that money has never played a role in the decisions taken by him in his career, Sangakarra said that since making his international debut in 2003 he has never taken club or provincial fees.

"I have always refused my fees, instead wanting them distributed amongst my club, the players and all the staff. Many of them are not paid on time or paid enough," he said.

Sangakkara added that unless SLC takes a firm decision over such situations, similar conflicts are going to arise.

"The lack of respect and poor communication by the board with its players is what is contributing to the desire of the younger players to choose franchises over national duties," Sangakkara stressed.

The Champions League is scheduled to start on September 17 in Hyderbad. The Kandurata Maroons are the only Sri Lankan side represented in the tournament.