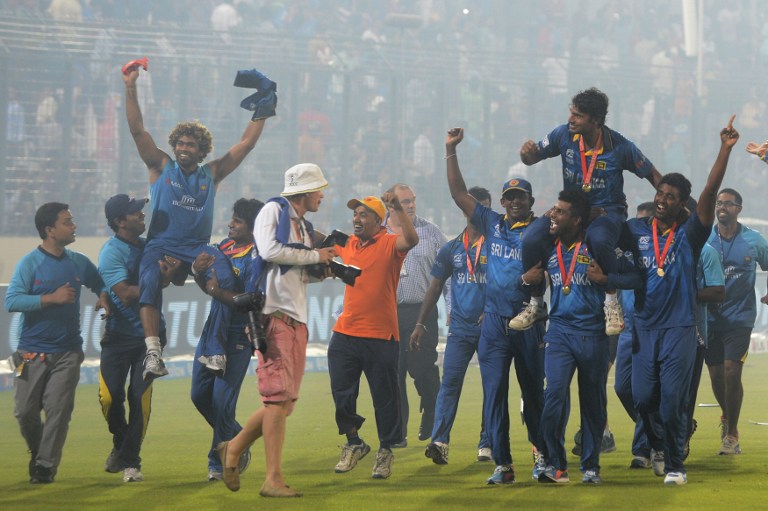 After 18 years of waiting for that elusive second world title the WT20 finally provided a memorable end to the drought. © AFP

Sri Lanka had good form on their side when they began their WT20 campaign, having lifted the Asia Cup not too long ago and the added boost of being ranked the number-one side in the 20-over format.

Form has never been a question for Sri Lankan sides entering a global tournament, and at the start of their WT20 campaign this team had lost only one of their white ball matches for 2014, which was a WT20 warm-up against West Indies. Sri Lanka were looked at as serious contenders for the title, and a few whispers were emerging of another potential runners-up spot.

Having played twice before in the World T20 finals — in 2009 and 2012 — Sri Lanka were no strangers to this tournament. It seemed as though Sri Lanka had only themselves to beat, if they wanted to finally break the 18-year jinx and win their second world title.

Clinging on to beat South Africa in their opening game of the tournament, before steam rolling the Netherlands, Sri Lanka looked a side that meant business right from the onset. Coming up against England, a team that was looking out of sorts, Sri Lanka posted their highest score of the tournament. With the English at two down for no runs in the first over, it appeared in all likelihood that an early finish to this game was on the cards. Instead, Sri Lanka was floored by a magnificent counter-punch by Alex Hales.

Almost immediately after the loss to England, the team to beat in the tournament were looking shaky. Their much-talked about bowling line-up had crumbled under pressure. Their captain at the time Dinesh Chandimal was also facing a one-match suspension due to a slow over rate. The media was sharpening its knives and the fans were lowering their expectations.

Rangana Herath to the rescue

There were many contributions from a number of players that paved the way to the final. © AFP

With Chandimal, who was struggling to hold on to his place due to a string of low scores, serving his suspension and out of the picture, and under a new captain Lasith Malinga, Sri Lanka faced a crunch game against New Zealand. From being tournament favourites, they suddenly faced the possibility of not progressing much further. Mid-way through the encounter, Sri Lanka were bowled out for a below-par score of 119, and the term ‘chokers’ was on everyone’s lips.

Sri Lanka’s star spinner Rangana Herath, who had not played in previous games at that point, entered the fray and the tournament was set alight with a match-changing spell of five wickets for only three runs in his four overs. New Zealand, the consistent dark horse, were on their way home after being bowled out for 60, and Sri Lanka marched on with renewed confidence.

Following their win against the Kiwis, the pundits began taking notice of Sri Lanka. With their backs against the wall, Sri Lanka displayed a fighting spirit that in the recent past seemed to have abandoned the country’s cricketing culture.

The Sri Lankan selectors’ questionable decision to drop Chandimal mid-way through the tournament certainly raised a few eyebrows. Yet, it was testament of the unity within this unit. Sidelined, Chandimal was seen leading the cheers from the bench, as Sri Lanka lined up against defending champions West Indies. In a contest that promised to be a close affair, Sri Lanka seemingly breezed past their opponent, courtesy of a solid all-round performance before rain intervened.

It was next a mini-replay of the 2011 World Cup final — India and Sri Lanka were once again lining up against each other, with a World Cup at stake. India’s form in the tournament had been reminiscent of the 2011 World Cup. They were walking over opponents with little fuss. Sri Lanka, on the other hand, had a few ups and downs and prevailed through a combination of outstanding performances from both young and old. They were much more than a one-man show.

India went into the World Cup final as favourites, while Sri Lanka had the ‘chokers’ tag to contend with. © AFP

Nerves, the finals jinx and the formidable India; this all made for a great encounter.

After quick wickets at the start and a batsman gravely out of form, Sri Lanka looked to have only Virat Kohli to subdue. Of course, the new Indian star showed exactly why he is being billed as the most likely batsman to surpass Sachin Tendulkar’s records.

Sri Lanka gave him due respect, accepting that Kohli was the in-form man, and instead focused their attentions on the rest of the Indian line-up, who looked pedestrian. A lacklustre innings from Yuvraj Singh and Mahendra Singh Dhoni’s inability to lay bat on ball in the final overs was testament to the spirit and skill of the Sri Lankan bowlers.

The Sri Lankan public had pinned their hopes on the entire team to win the tournament for the retiring Kumar Sangakarra and Mahela Jayawardena. Instead, as one last parting gift to the T20 side, the old war horses combined to guide Sri Lanka to World Cup glory.

It was fitting that Sangakarra, the man who has single-handedly carried the Sri Lankans for the past couple of years, would be there to secure the win and with it their first world title in 18 years.

The scenes of jubilation among the players was a reminder that many of these players have endured four previous finals, all of which they were forced to walk away runners-up. Back home crowds poured out on to the streets, celebrating a win that they have been waiting for since 1996. It was a win that suggested finals hoodoo was over.

With Jayawardene and Sangakkara walking away from T20 cricket after this tournament, it was a perfect end to the script; that they contributed towards Sri Lanka’s World Cup success. More importantly, Sri Lanka proved in this tournament that they had players in the wings ready to fill the void left by the greats.

In 1996, when Sri Lanka surpassed all expectations and won their first major trophy, it was a combined team effort that saw them through. In the recent past, Sri Lanka have appeared to rely on the performances of individuals, but this World T20 has changed all that, as all eleven players — including the discarded captain — played a role.