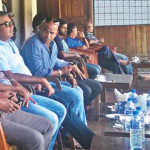 He told a few tales of the man’s greatness, from the difficulties he faced as a slightly rotund youngster breaking into Sri Lankan cricket in the early eighties to the stern but fair leader he became in the 1990s. But the one that stood out was a story about a certain Test during which Ranatunga
Read full article
0
SHARES
ShareTweet