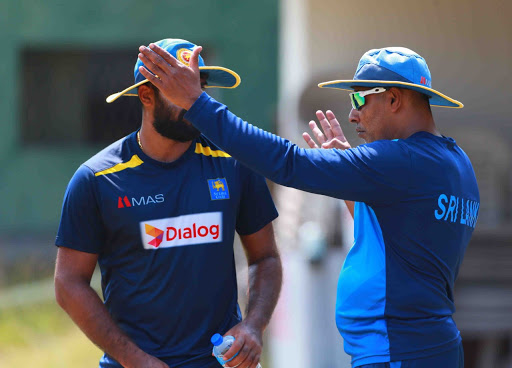 Just before the West Indies tour, the bowling coach David Sekar, who was paid USD 15000 (Approx 30 lakhs a month), quit without notice.

When were we informed that Chaminda Vaas was appointed as the bowling coach? On Friday (19), just three days prior to the departure of the team.

The news was out, social media exploded and we all got to know about the appointment, but one man still did not know, that was the most important person, Vaas himself.

He was not informed until late night that he is going to be appointed as the bowling coach, still no confirmation was given on whether he is appointed for the West Indies tour, or for a month, or permanently.

SLC informed Vaas three days prior to the departure, without giving him proper time to think, talk and to agree on decisions. So, is Vass wrong about deserting the team just hours prior?

Sekar, the fly away bowling coach was paid USD 15000 (Approx 30 lakhs), but did Vaas request the same amount? Nah. How much was Vaas offered? Not gonna reveal the amount but in comparison with Sakar it was like the amount a CEO of a company gets and a junior executive gets, yes, go on take out your smart phones and do the maths now. Did Vassy say the amount offered to him was less, did he request for a pay rise? Nah, if you believe that press release of SLC written by a recently estranged lover, then god bless you my friend. Vaas was all ok to render his services for the agreed amount. So what was the issue then? Here we go. Coaches, players and the officials are paid a match day fee, which is like an allowance in addition to the agreed fix amount (which was USD 15000 for Sekar, and  USD XXXX for which Vassy agreed). The allowance they agreed to pay him was USD 75 (Approx Rs 15,000) a day, his only request was to make that allowance USD 200 (Approx 39,000), all he wanted was an increase of USD 125 (Approx Rs 25000). Is this fair? Yes, one reason why? for a coach who has to stay at the grounds with the players, run with them, train them, sweat all day long, and get blamed for poor performance it was a very fair request, in comparison to USD 400 (Approx Rs 78000) a day paid for the Manager Jerome, for sitting in the hotel room while coaches burn in the sun, that is one way of putting it out. Is Vaas wrong in making that request?Go on, use your brains and think, USD 400 for a manager, just USD 75 for a coach.

Too many committees spoil the soup. From which committee does this approval for finances and selection of coaches happen? Confusing, not only to us but to them too. Vassy made the request to the chairman of the Technical adviser committee Aravinda De Silva, but he had no authority on it. He was asked to meet Ashley, who then said that the decision should be taken after having the discussion with the chairman, Shammi Silva. Remember for all these to happen Vassy had only 1 working day. Time for another example. I, as an employee have concerns and recommendations to make  just hours before executing a new project which I need to talk with my Manager, I tell that to  my assistant manager and he says let’s talk to the Manager at this time, and I after pushing back my work, spending time goes and meets the Manager, but he refuses to see me. Were I valued? Were my concerns, suggestions ever heard? Don’t I have self respect? Well, If I have all those things, if I carry myself in such a way, should I go behind People? Not at all eh? Well, that is the same thing Vassy did. He felt disrespected, his concerns were not heard, so he decided to hand over his resignation and leave. When he left the President was soon to react and wanted to meet him. But, why should you go as a human who has your set principals go back and talk with someone who kept you waiting and did not want to talk? So is Vaas wrong for taking the decision at that time? Did he have proper time to make a decision? Think, think again. It just happened in a blink of an eye.

Pandemic and money. In the letter written by the heartbroken kid was that it says that the board is going through financial difficulties and it is unfair to make such a request like that. Well let me tell you this. It is the same board that is said to be having financial difficulty that is planning to rope in Tom Moody by paying USD 30, 000 a month (approx 58 lakhs), so wow eh? It is the same board that spent 800 million on clubs recently. So are they financially affected to just increase the day allowance by USD 125?

Who is right? Who is wrong? Up to you to analyze and decide without writing unprofessional letters.