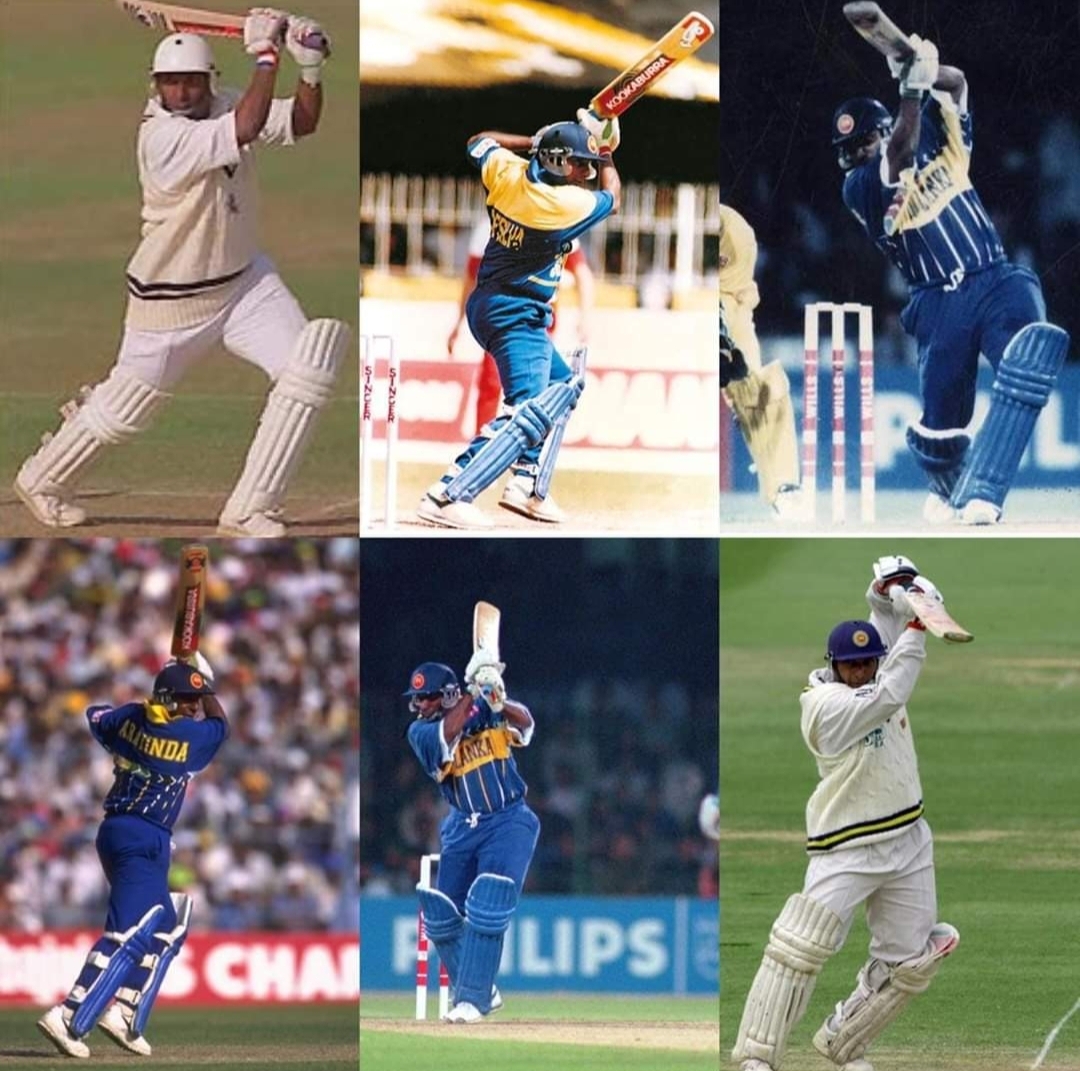 Randomly came across this collage on a social media group recently. Some pictures have a special feel to it and this certainly did evoke a special feeling. You may wonder why. For any kid who fell in love with the game of cricket in mid 90s Aravinda De Silva was Sri Lanka’s Virat Kohli of yester year. Yes we have had many other celebrated cricketers from this little isle, but Aravinda was a different breed.

Aravinda had to suffer the fate of may genius who emerge from minnow nations. Prior to 1996 Sri Lanka definitely belonged to that category. Except for 167 at Gabba in 1989 and 267 in Wellington Aravinda’s genius was not taken note of compared to the superstars of that era. However the 1996 World cup was about to change it all. Having grabbed the limelight with superlative knocks against Zimbabwe and Kenya in the 1996 WC group stages the hour of reckoning arrived in Calcutta ( as it was back then). With 100,000 fans cheering a formidable Indian attack,in Sri lanka’s first ever semifinal the openers were back in the hut with only a run on board. A nation of 20 Million was shell shocked. Dreams of a world cup final was on the cusp of crumbling. If there was a real life David vs Goliath scenario this was it. Against all odds, in walked the genius and without batting an eyelid went in to decimate the likes of Srinath and Kumble at their prime to all parts of the ground and played which in my opinion is arguable the best ever ODI innings by a Lankan. 66 of 40 off deliveries was no mean feat in that era in such a high voltage game. The drives on the up and cuts piercing the tiniest of gaps on the off side were sublime to say the least. By the time he left the field having his stumps dismantled by Anil Kumble he had instilled belief in the Lankan line up which was duly capitalized by the ever capable Arjuna Ranatunga and Roshan Mahanama propelling the Lankans to a formidable score of 251 which eventually turned out to be match winning.

Mastery however is not delivering one off brilliance. What sets apart the maestros from the one match wonders is the capability to sustain superlative performances repeatedly. The chance to prove his mastery arrived within a fee days this time in Lahore. The final was no different. With 2 wickets down chasing a more than formidable score the maestro was at it again. The non chalance under pressure cannot be explained in words. The composure and the calculated risk taking were certain traits even the likes of Sachin in his prime failed to portray. The Aussies had every reason to believe they could push over the Lankan challenge. But Aravind played probably one of the greatest ever innings in modern day finals. Ricky Ponting, Adam Gilchrist and others have played superlative knocks. But none of those were played in a high pressure context as Aravinda faced. A single shot of indiscretion could have been the difference between Sri Lankan cricket coming to prominence and remaining at the background for ever. Under such pressure the exemplary genius was even more special. The world cup surely made the word take note of who Aravinda was.

What followed was a collection of little spoken about series. The Singer cup, Nairobi Quadrangular, Sharjah cup and few bilateral series against India and Pakistan. The disdain with which Saqlain, the genius offie was dealt with in Nairobi was a sight to watch. The supremacy was visible throughout other series as well but there was one duel which stands out.

When pakistan toured Sri Lanka in 1997 Aravinda smacked a series of hundreds. During the course he used to expose all three stumps to Mustaq Ahmed arguably the second best leaggie at the time, and nullified any advantage he tried to gain out of the rough outside right handers leg stump. Exposing all three stumps and hammering the leg breaks though off, and at times sweeping in front of cover were deeds not many could even dare to dream about.

During the same time in Sharjah the likes of Wasim and Waqar too were not speared. If my memory serves me right a hundred in a sharjah cup final in 1997 April,was an innings where he tamed the famous duo tearing them apart after rebuilding an innings that was  shattered early and launched a massive onslaught against the best  proving his dynamic nature once again.

That era was Aravinda De Silva’s prime. Following that time there were noteworthy knocks such as the one against England at Oval in 1998 stitching together a wonderful partnership with Sanath at a rate helping Sri lanka win after conceding 400 in first innings and few other centuries in tests. But the Aravinda we witnessed towards the turn of the millennium wasnt the exact replica of the genius he was.

Nevertheless there was one moment which ran the clock back in time. Facing the most fearsome fast bowler of that time Brett Lee, Aravinda showed his class depositing Lee’s thunderbolts in the grass banks of Centurion.it was a knock in a lost cause, but the ability of a batsman in late 30s to treat the pace of Lee with such ease was just a reminder about the capability the genius possessed. It was no surprise that when a glorious career ended through a run out at Port Elizabeth in the 2003 Semi Finals the Australians celebrated as if they had won the game at that point. In fact they were right because even at that age if there was one guy who could have made a defence and derailed the Aussie juggernaut I would have been Aravinda, the celebrations were a reflection of the respect probably the greatest team of our era had for the pint sized dynamite from emerald Island.

Lookong back those were moments which I never realized I’d never ever get to witness again. Yes there were Mahelas, The Sangakkararas and today we have the Smiths, Kohlis and Sharmas..all are a delight to watch but coming across this collage it just reminded me that there was and will only be one mad max and it was definitely a privilege to watch him at his prime

The first picture here is probably from his stint at Kent where he first announced his genius in the english domestic finals and the last is on his final tour to UK in 2002. Somewhere in between these 2 extremes the world witnessed flamboyance personified and that undoubtedly would have left an indelible impression in many cricket fans’ hearts not only in Sri lanka but the world over.