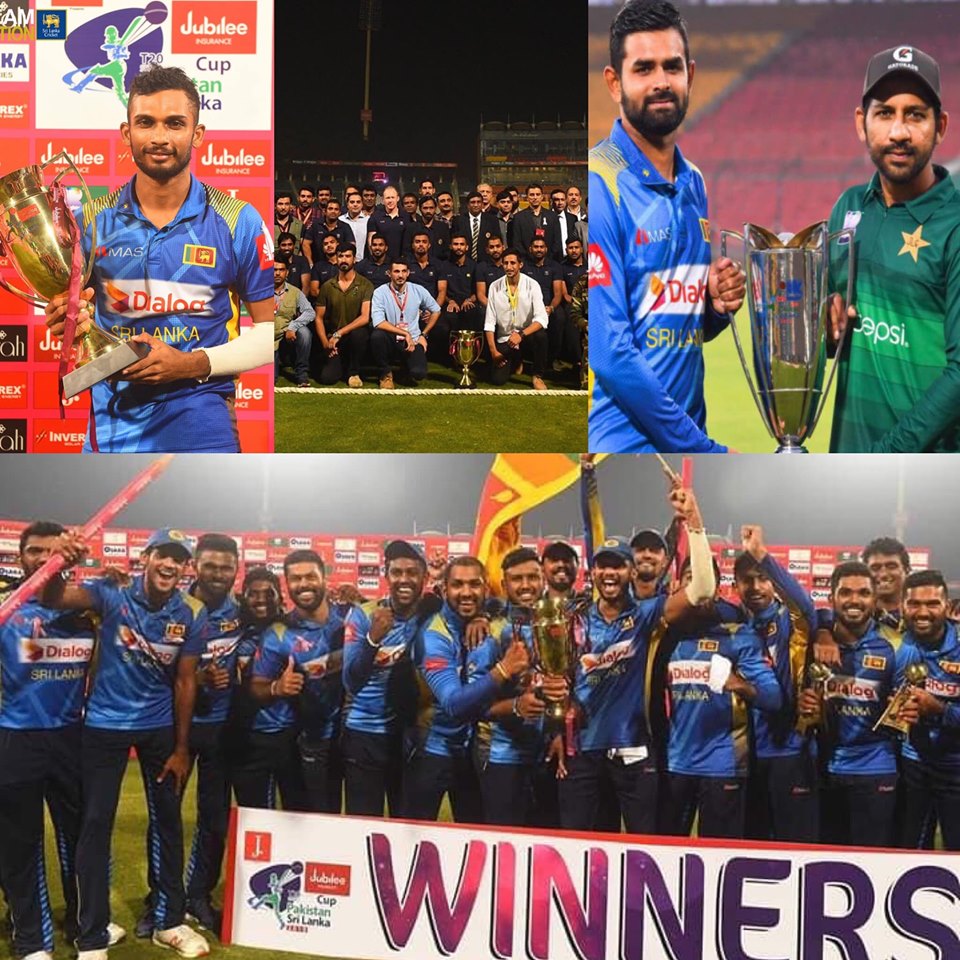 The series of brotherhood comes to an end successfully, Sri Lanka victorious by 3 – 2 !

A kid of 9 residing in Lahore, Pakistan was counting hours to watch a cricket match at the grounds for the first time but the visiting Sri Lankan team was attacked on 3rd March 2009 when they were on their way to play the 3rd day of the second test match. This resulted in 7 Sri Lankan cricketers together with an umpire and 2 of the support staff getting injured and this ended the lives of 6 police officers and 2 civilians. That was it for the 9 year old kid who was eagerly waiting to watch a cricket match. Cricket in Pakistan was dead and no International team agreed to tour.

After 10 years the 9 year old kid was an adult who was able to grant his childhood wish. When all the countries rejected it was the same team that faced the attack; Sri Lanka decided to send their team to Pakistan. When many of the seniors opted out of the tour due to security reasons a set of young and in experienced blokes were arranged.Yes, the fearless youth decided to take the trip to Pakistan, it was a 2nd string Lankan team and the predictions prior to both the series was that the Lankans would lose it by 6 – 0.

The first ODI was washed out, Pakistan won the 2nd match not very convincingly though. At 28 for 5 the Lankans were heading towards an embarrassing defeat but a record 6th wicket stand of 177 between Dasun and Shehan made sure that the young boys lost by a lower margin.With a brilliant century on return by Danushka Gunathilaka Sri Lanka scored 297 in the 3rd ODI but lost by taking the game deep.

The T20 series was a miracle. Won the first match with two debutants and with a debut captain, kept the same momentum and won the 2nd. Where Banuka announced his arrival and showed what we have missed over the past 9 years.Sri Lanka had no intentions of going for a white wash, so they gave the chance to the remaining 5 players who were in the bench, another debutant made his way and shone by breaking records; Oshada became the first Sri Lankan to score a half century on T20 debut.The playing 11 was the 2nd youngest Sri Lankan T20 team, the most inexperienced T20 team since 2009 and the aggregate matches played by the 11 was only 99. But they defeated the world number 1 T20 team in their own backyard

So many positives for the young team, they were fearless, they were dedicated, they showed passion and most importantly showed good team work and worked as one. No Seniors, no extra ordinary players but an equally talented team. They Achieved the biggest win for Sri Lanka over Pakistan

Danushka Gunathilaka announced his comeback to international Cricket with a brilliant ODI century and contributed that into the T20 series were he scored his highest T20 score which also made him the man of the match of the 1st T20.

Bhanuka Rajapaksa showed he has not lost anything with a handsome knock on debut. He could have got the chance after the 2010 under 19 World Cup. He was considered as the next big thing for Sri Lanka after the 2010 under 19 World Cup. He was the highest runs scorer for Sri Lanka, the 4th highest runs scorer of the tournament with 253 runs in 6 innings just behind one of the best batsmen of the modern era Babar Azam. However luck was not in this Rajapaksha’s favour and after 9 years he showed everyone why he deserved this chance when he powered his way to 77 off 48 balls in only his 2nd T20, and was named the man of the match.

The other Debutant, the other Banuka, Minod Banuka who showcased his batting talents in the 3rd ODI showed his wicket keeping skills with a brilliant grab and the encouragement and the enthusiasm behind the stumps was impressive. He was so active behind the stumps and was such a live wire.

The man of the series, Wanindu showed what Sri Lankan has been missing over the years, yes, a good leg spinning all rounder. He couldn’t do anything wrong. Picked up 3 wickets in an over in the 2nd T20 and changed the game and also picked 2 in an over bowling at the the death in the 3rd ODI. His fielding was just brilliant.

Nuwan Pradeep was very impressive with the bowl and brought all his experience into play by picking 7 wickets in 2 games. His partner Kasun Rajitha Bowled so many dot balls and applied pressure. Indeed he was an unsung hero.

Dasun Shanaka on his captaincy debut led his troops brilliantly by using the right bowlers at the right time. His strategies played off and it was clearly shown that he possess a calm head and a strategic brain. Sri Lankan MSD in the making?

Oshada showed that he is not only a test player but a player has a good range. His first delivery in T20 cricket was glanced to the fine leg boundary for a four and then it was the time for the shot of the tournament; a straight six with a lovely pose for the photographers. On debut and the first two balls he faced went along the ground to the boundary and over it for a six. Oshada proved his worth by became the first Sri Lankan batsmen to score a T20 half century on debut and made an imposing 78.

Sheshan Jayasuriya showed that he is a very dependable middle order batsmen who can anchor an innings and accelerate when needed.

There were lot is positives for the taking and indeed T20 is for the youth as De Mel said only 3 -4 players from the seniors can come back into the team. Which mostly likely is Malinga, the two Kusals and Dickwella. The team work and the understanding was brilliant. The leadership was matured and showed what’s a people’s man can do.

A very big thank you should go to the Pakistan forces first the security provided and for the great hospitality shown, to Ramiz Raja who always spoke good about the Lankans and the Pakistan fans who visited the ground to watch the matches.