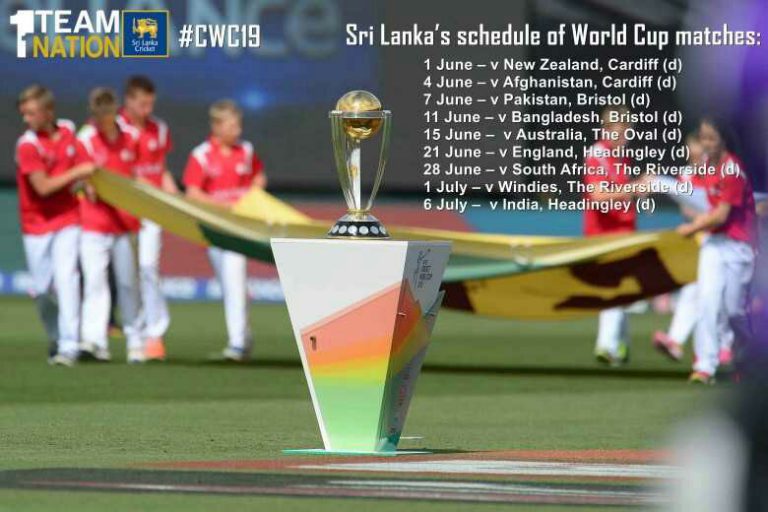 A realistic strategy based on the available resources and a composition that helps execute that strategy should be the main focus when selecting Sri Lanka’s 15 member World Cup squad. Additionally, experience should prevail over youthful and the tight schedule should also be taken into close consideration.

For a team that has frequently failed to bat 50 overs, or even pass 200 runs consistently over a period of more than two years, it would be foolish to plan around a strategy that aims to set or chase 330 plus scores. Sri Lanka’s best hope is to look for a batting order that provides a balance between attack and consolidation and play at least four front line bowlers to give themselves a chance of being competitive even with below-300 scores.

If reality prevails over fantasy and selectors look to bring stability to the batting line-up, then (1) Dimuth Karunarathne becomes an automatic choice in the top three. (2) Kusal Janith, if fit, should be an automatic choice as the top order aggressor. Although (3) Danushka Gunathilake had a poor provincial tournament, he did score a hundred in the premier league limited overs event not too long ago and averages 41 in his last 17 ODI’s. He is easily the team’s best fielder and his ability to bowl is a huge plus in a batting line-up that lacks all-rounder in the top six. A fit (4) Mathews is Sri Lanka’s best batsman by a distance. With Dickwella struggling to find any form at all, experienced (5) Chandimal should come in as the number 1 keeper and shoulder the responsibility of consolidating during the middle overs. (6) Dhananjaya De Silva’s ability to bowl useful off-spinners provides the team another option when considering the balance of the team.  While (7) Kusal Mendis’s ODI record alone wouldn’t warrant selection, he’s too good a player to give up on. His slip catching will also be an asset to the team.

(8) Thisara Perera will start the tournament as Sri Lanka’s first choice bowling all-rounder. While (9) Isuru Udana’s bowling has not looked potent enough to consider him as a front line bowler, his recent batting heroics makes it hard to not include him as the second all-rounder in the squad. (10) Akila Dhananjaya should walk in as the premier spinner in the team.

An aging, slowing and increasingly grumpier (11) Lasith Malinga is still Sri Lanka’s best limited overs fast bowler. (12) Suranga Lakmal’s ability to bowl a tight line and length and exploit potentially seamer friendly conditions during the early rounds makes his presence a necessity. (13) Kasun Rajitha has been one of the most consistently fit and healthy fast bowlers in Sri Lanka as of late and his recent form will be hard to ignore.

One of Sri Lanka’s biggest worries, the search for a back-up spinner to Akila, has not gone anywhere. Sandakkan continues to struggle for control. Vandersay has been in and out for various reasons and does not seem to have found his rhythm. Jeevan Mendis has been amongst the wickets and scored some runs. However, there is a worrying question mark over his ability to consistently bowl a 10-over spell in ODI cricket. If remodeled Akila suffers a loss of form or confidence during the early stages, it might be too much of an ask to trust Jeevan Mendis as the lone front line spinner. Of the remaining experienced options, (14) Seekkuge Prasanna might be the best calculated gamble. He has played county cricket in England and is a more established front line wrist spinner than Jeevan and can also bat a little bit.

Angelo Mathews could easily get injured walking out of the airplane upon arrival in England. For that uncertainty alone, he becomes a huge gamble as captain. Chandimal and Thisara are said to be part of fractions, which does not help Sri Lanka’s cause. Malinga apparently does not have the support of most senior players. Dimuth Karunarathne was drafted into the ODI set-up at the last minute, primarily to help address the leadership conundrum. It might very well be a huge gamble. Yet, given is reputation, Dimuth does seem like the most diplomatic, if not the best, option for captain.