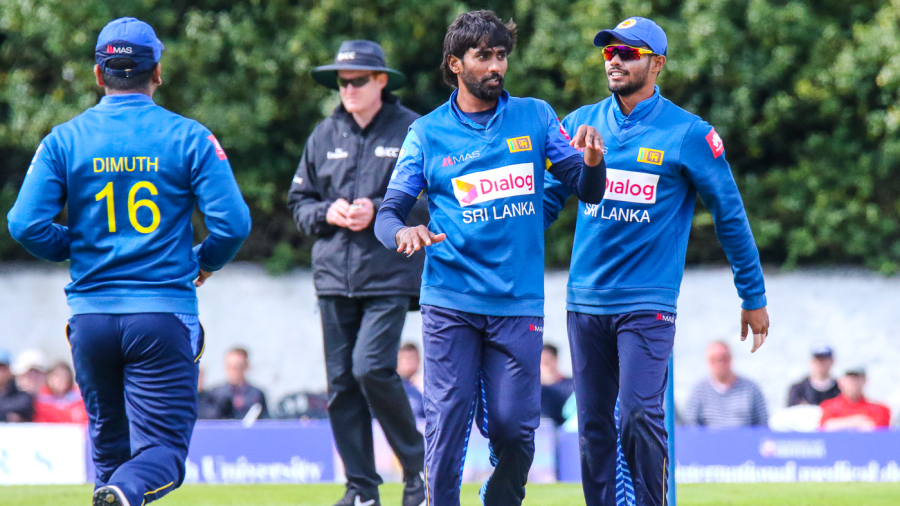 Dimuth Karunaratne marked his return to One Day International cricket with a half-century that helped Sri Lanka post a formidable score, one that Scotland were not given a full opportunity to chase down in the rain interrupted second ODI at the Grange Cricket Club in Edinburgh yesterday.

Scotland had reached 132 for 3 after 27 overs when play was stopped due to rain, and on resumption of play one and a half hours later were given seven overs to score a reduced target of 235 – effectively 103 off 42.

The hosts brought the equation down to 46 off 16 balls, when big hitting George Munsey, who had threatened to fashion an unlikely win, was bowled by Nuwan Pradeep 61 scored off 42 deliveries.

Pradeep then bowled Safyaan Sharif off the next ball, as Scotland’s innings came undone losing by 35 runs on the Duckworth-lewisstein method.

As long as Munsey, who was unbeaten on 23 at the stoppage, was at the crease it seemed like Scotland would have a chance, as the big hitting batsman added another 38 to his score off 18 balls.

Munsey scored 17 runs in the first over after the resumption bowled by Thisara Perera, setting the tone for how the Scots would approach this final passage of play.

Opener Matthew Cross, who had reached his third half-century before the stoppage, fell in the following over, caught in the deep by Avishka Fernando off the bowling of Suranga Lakmal.

New batsman Michael Leask and Munsey then added a six each, before Leask also holed out to Fernando off Lakmal’s bowling in the second ball of the 30th over.

Two balls later, Munsey reached his first ODI half century with his third six, but fell in the following over.

After Pradeep’s double strike the equation went well out of reach of the Scots, who were bowled out for 199 with four balls to spare.

Rain had denied Sri Lanka valuable match practice last week, when the first ODI of the two-match series was washed out without a ball bowled, but yesterday they were afforded a full innings, in which they posted a total of 322 for the loss of eight wickets in 50 overs.

The biggest positive for Sri Lanka from yesterday’s ODI would have been the contribution of the new-look opening pair of Karunaratne – parachuted in to captain the team and playing his first ODI in four years – and Avishka Fernando who provided the sort of foundation their team has lacked in the last almost two years, putting on a partnership of 123 – just the third occasion a Sri Lankan opening pair has achieved this in their last 40 ODIS.

The pair combined well, Fernando scoring his first six in the second over and then Karunaratne scoring three boundaries over the next two overs, but were also each given a reprieve – the latter dropped at first slip in the seventh over and the former at mid-off two overs later.

Fernando who had been on 22 off 29 balls when he was dropped reached his half century 32 deliveries later, and added another six and a couple of boundaries, before he was the first man caught out at the start of the 22nd over for 74, having scored a maiden half-century.

Karunaratne, a beneficiary of another dropped catch, was joined by Kusal Mendis and the pair put on 81 off 65 deliveries, before the former was caught for 77.

Some late order hitting, and Lahiru Thirimanne’s unbeaten 44, however saw Sri Lanka score 84 off the last 52 deliveries of the innings before ending on 322.

In response, Scottish opener Kyle Coetzer struck seven boundaries in a 51-run opening stand with Matthew Cross, a partnership that saw more focus on boundaries that running between the wickets, before Coetzer and Calum Macleod fell in quick succession to Nuwan Pradeep.

Craig Wallace then helped stage a recovery with a 43-run partnership with Cross, before he was caught behind off the bowling of Isuru Udana with the total on 95.