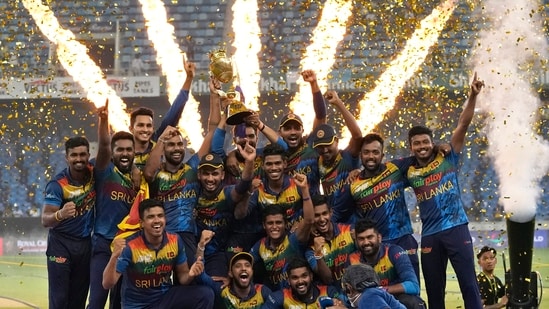 Months before the 2015 World Cup, Sri Lankan fans believed that Angelo Matthews’s side could bring the island another trophy home. They had every reason to believe that, as Sri Lanka was doing incredible things at that time. After comprehensively defeating a well-balanced English side at home, Sri Lanka was on the verge of becoming the number one ODI side. Then Sri Lanka lost against India and New Zealand in their backyard.

This wasn’t much of a surprise since history didn’t have good stories to tell about Sri Lankan matches in India and New Zealand. However, the way Sri Lanka lost their games took away the confidence they had in their pockets at an extremely crucial stage. They panicked and they were no longer the favorites to win the world cup. However, Sri Lankan fans believed because that is what Sri Lankan fans do. They believe.

Their belief didn’t betray them in the initial matches. Sri Lanka registered three comprehensive wins against England, Afghanistan and Bangladesh. Then Australia exposed Sri Lanka to their batting vulnerabilities. And finally, South Africa sent them home in a humiliating fashion. At least, the fans had Sangakkara’s four consecutive hundreds to smile about despite the heartbreak.

Unfortunately, that was the final time the fans smiled for a long time. After Mahela, Dilshan, and Sangakkara announced their retirements, International teams began to bully Sri Lanka. Sri Lanka even lost to Zimbabwe at home. For every new series, there would be a new captain leading the side. According to a rumour, when the board had run out of captains, they had even asked potato farmers and supermarket thieves to lead the side, but nobody had come forward to rebuild Sri Lanka, because everyone had given up on hope.

In 2017, Sri Lanka had to chase a target of 322 against the mighty Indians. And Sri Lanka chased it down quite easily. Fans began to hope again. But in the end, Sri Lanka turned out to be like one of the villains of John Cena’s matches – a lot of promise in the beginning but an inevitable defeat in the end. Then in the 2019 ODI world cup, Sri Lanka made a surprising decision. They named Dimuth Karunaratne the captain who hadn’t played a match in four years and held an average of less than 16.  As predicted, Sri Lankans were eliminated from the tournament without them showing any fight.

After Karunaratne, Kusal Perera took over, but didn’t seem to be effective in the slightest. Sri Lanka lost to Bangladesh and England convincingly. Then things went from bad to worse. Three experienced cricketers were banned from the side for almost a year for breaking Covid protocols. Many, if not all, thought this was the last nail in the coffin for Sri Lankan Cricket.

Dasun Shanaka who had played less than 30 ODIs became the next captain. Even Dasun Shanka wouldn’t have thought he’d last for more than five matches as captain. His inexperienced side faced India in a three match ODI series. They lost. Hang on. There is more to it. They lost after putting on a great fight. This intensity was what Sri Lankan cricket had been lacking for years. The board saw something in Dasun Shanaka and decided to give him another chance against South Africa. They won the ODI series. That win against South Africa was the first in eight long years. Fans began to take notice of players like Charith Asalanka, Bhanuka Rajapaksa, Chamika Karunaratne, and Maheesh Theekshana. They were too afraid to hope. So they waited.

Sri Lanka qualified for the 2021 T20 world cup after defeating Namibia, Ireland, and Netherlands. Then they defeated their rivals Bangladesh after a brilliant batting display that showed character and determination. With that momentum, they almost defeated South Africa. Most players were devastated after that loss. But that didn’t stop them from performing well against Australia and England. In the end, they left the tournament with a good win against West Indies.

This team surely had potential. It was just a matter of time till the results would show up. And they did. In the third T20 against Australia at home, Shanaka turned into a monster and stole a victory from them. It didn’t just lift his spirits; it lifted the entire nation’s spirits. Channeling that renewed energy, after thirty years, Dasun Shanaka’s men defeated Australia in an ODI series at home.

Finally, Sri Lankan cricket looked as if it had a proper leader who had what it took to overcome adversaries and give the fans what they deserved. The smiles of the fans disappeared when Afghanistan crushed Sri Lanka in the opening match of the Asia Cup. But Shanaka and his men didn’t give up. They proved to the whole world that they could produce results not just by channeling wins, but also defeats. Sri Lanka did not lose any of their games after their first loss and went on to win the Asia Cup for the sixth time.

The fans now know that Shanaka is their right leader. He has built a team and has produced results consistently with a win percentage of 57.14 in ODIs and 52.23% in T20s. Sri Lanka will most probably end in Group A with Australia, New Zealand, England, Ireland, and Afghanistan. They will have to win at least four matches to advance to the Semi Finals. This looks almost impossible. But in the recent times, we have witnessed strange things happening with Sri Lankan cricket. They have pulled off victories out of nowhere.

With skillful openers, a solid middle order, world-class spinners, quality pacers, and a consistent all-rounder, this team can upset the likes of Australia and New Zealand.

Is it safe to hope for another miracle? Why not?