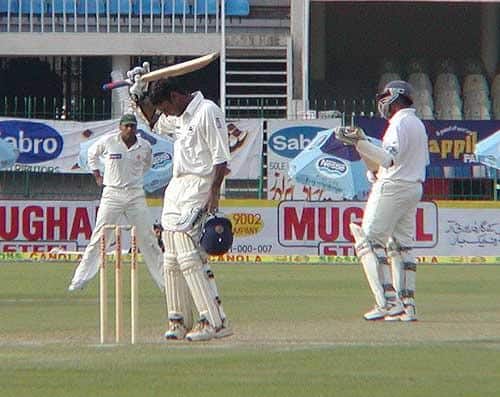 Having looked at Sangakkara’s initiation onto the International arena in previous posts, today we relook at a knock which has not ever been televised or seen by any fan but turned out to be pivotal in Sangakkara’s ascent.

In early 2002 Sri Lanka played Pakistan in the now defunct Asian Test Championship final. The tournament was fragmented and without India’s participation was low key to day the least. Nevertheless Sri Lanka were on a roll at that time having won 8 tests back home and this was the 9th match in that streak. Sangakkara meanwhile had notched up centuries against India and Windies in that hole run and was well and truly up and running

However at Lahore conditions were different. Having lost the ever reliable Marvan Atappattu for a duck, Sangakkara walked in whilst Shoain Akthar was hurling thunderbolts trying to make amends for a paltry first innings score put up by Pakistan. The Pakistan line up consisted of Waqar Younis and Mohammed Sami meaning Sangakkara having kept all day was faced with baptism of fire. Sangakkara initially in unison with Sanath and thereafter with Mahela would forge meaningful partnerships and dig deep to post his maiden double hundred ending up with a magnificent 232 setting up a Sri Lankan win. Though we were not privileged to have a glimpse of the knock the context and the opponent profile is adequate to gauge the quality of the knock. This would turn out to be Sangakkara’s first of many double centuries against Pakistan. The first interaction against Pakistan proved to be a reliable indicator of things that were ro follow as Pakistan would become Sangakkara’s favorite opponents.

An intersting anecdote from this innings was reveled by the master himself. Sangakkara say that he was in a zone where he was oblivious to what was happening around him so much so that when he flicked one down the leg and reached his double century he wasn’t sure and had inquired from his partner Mahela ” is it a double century ?”.

As simple as it may sound it was a prime example of how results follow when you detach yourself from the outcome and focus on the process. Kumar Sangakkara had learnt the art of scoring double centuries in this innings and thankfully it was the first of many more to come #cricketdecoded #cricketingperspectives #kumarsangakkara