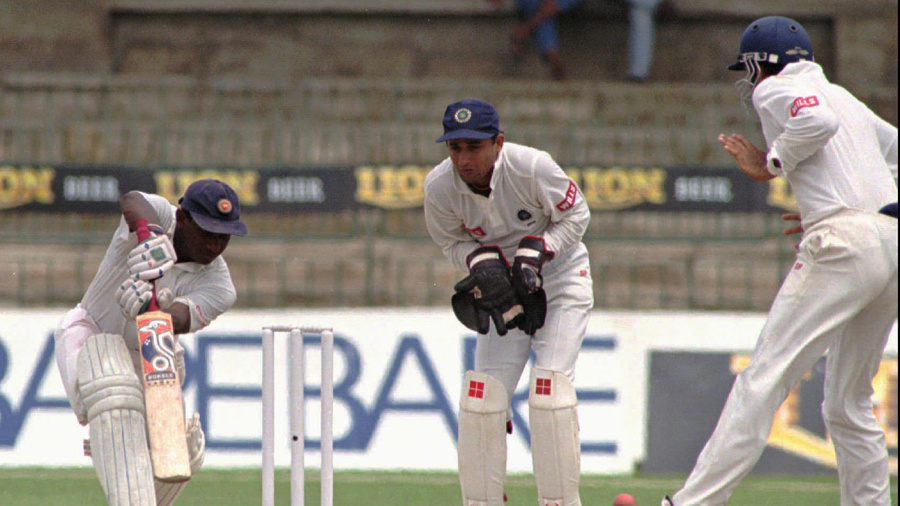 1996/1997 Season was arguably Sri Lanka cricket’s most dominant phases. It was a period when the brilliance of Sanath Jayasuriya decimated bowling line ups around world, especially in Asia.

His sheer dominance led his batting style being compared with all time greats. The greatest compliment was from Sachin Tendulkar who was leading the Indian team at that time saying ” I haven’t seen Bradman bat but I have seen Sanath Jayasuriya”.

It was quite apt it came from Sachin as India played Sri Lanka frequently during that era so much so that there was a joke going on in the Indian team saying ” come what may we will have seats booked on a plane to Colombo every July”. The Indian attack though having the likes of Javagal Srinatha and Anil Kumble was frequently tormented by the tornado from down south. The brute hitting was there to be seen irrespective of whether it being the white ball or red ball format. India became Sanath’s favorite bunnies.

In the ODI format during this period there were quite a few innings which stood out. It all started with the massacre at Delhi in a world cup group game which effectively ended Indian opening bowler Manoj Parabakar’s Career. Sanath’s knock made mockery of a 272 chase which was herculean back in the day. This was followed by The knock in the Asia Cup final in 1997 where Sanath would score 63 off 52 setting up an easy win chasing 240, an unbeaten 151 at Mumbai out of a chase off 220 odd scoring more than 65% of the chase in front of a packed stadium was another showcasing of Sanath’s prowess . These were few highlights of many such maulings Sanath had inflicted on the Indians

In test cricket the 340 at RPS and 199 at SSC in the very next match were innings that stood the test out time in fans memories. In between there was a 32 which was made up of eight boundaries. Am unique phenomenon in test cricket.

All this was what we saw on the surface. But I’m sure you’d love to know what went through the Inidan minds. Here is an intersting anecdote from Saurav Ganguly who was in his formative stages of his career back then

” Back in the day the security in Colombo was so tight. We would have to occupy one whole floor at Taj Samudra. After a day’s play and usual hammering we would sit in front of our rooms on the corridor and order tea and discuss as a team how to get rid of Sanath. Our pace attack led by Venkatesh Prasad would devise plans and agree upon to getting Sanath out caught in the slips by bowling outside the off stump. We as a team would agree and happy that we have a plan and disperse around 7 pm. The next day Venki would run up and bowl exactly the line we agreed upon and Sanath would flick it over Square leg for a six ( for those who dont know the technicalities it’s a very difficult skill to hit the bowl from outside off to square leg in cricket which requires immense skill), nothing would change despite our best of plans it would be another day and another hammering. We did not know how to get him out”

Ganguly would also reveal that as newcomers he and Dravid had to occupy the dreaded silly point and short leg positions while Sanath was batting. He would cheekily admit ” We didnt entertain any thoughts of catching the ball. All we were thinking was how not to let the ball pass by through our legs”. In hind sight it was fair. There was no indication to believe Sanath while get out tamely caught at those positions whilst he was in full flow. However during his knock of 340 ironically Ganguly would catch him close to the bat off a delivery that bounced unexpectedly.

When Ganguly uttered these words the respect and admiration was visible even after two decades. That was the skill of the man. A skill that has never been and probably never will be matched. All this in an era way before the advent of slam bang style cricket and introduction of well designed bats providing advantage to the batsman.