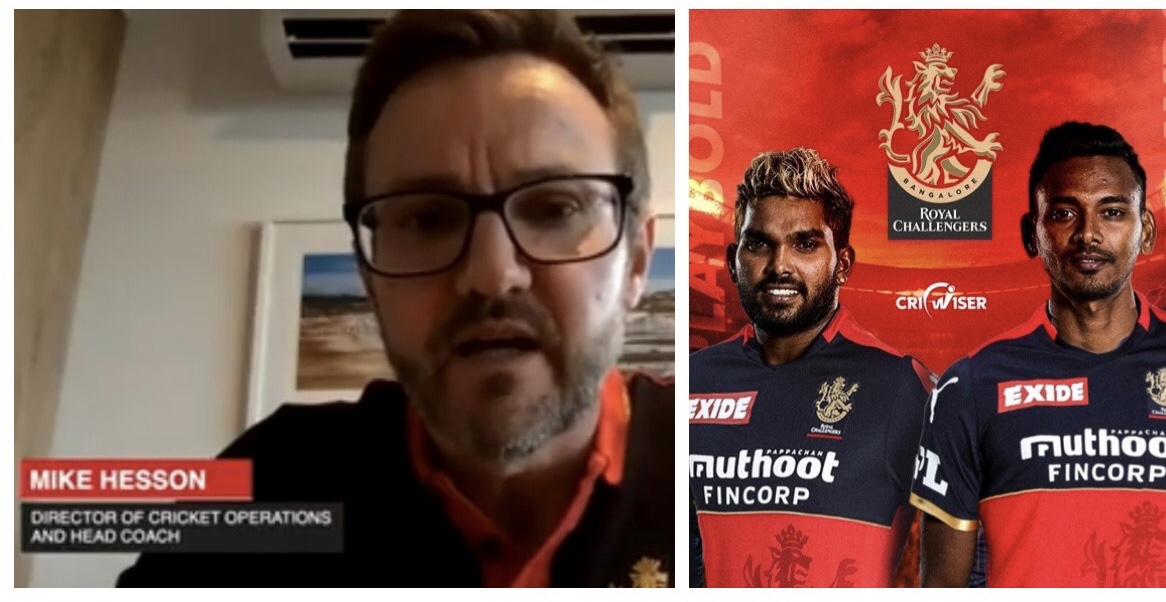 Ahead of the resumption of Season 14 of the Indian Premier League (IPL), Royal Challengers Bangalore (RCB) head coach Mike Hesson on Saturday stated that Sri Lanka’s Wanindu Hasaranga who replaced Adam Zampa was on the team’s radar for a long time.

Royal Challengers Bangalore (RCB) head coach Simon Katich stepped down as head coach of the IPL side due to personal reasons and as part of the team’s business continuity plan, Mike Hesson will step in and discharge the duties of head coach for this season, in addition to his existing role of Director of Cricket Operations.

“As a team RCB started the first half of the season well. We gained plenty of momentum and will certainly continue that progress in the season and a half. We are in a decent position but we also know that we have plenty of work to do,” Mike Hesson said in a virtual press briefing.

Sri Lankan all-rounder Wanindu Hasaranga will now be part of RCB for the second leg of IPL 2021 in UAE. He replaced Adam Zampa. Hasaranga was the Player of the Series in the recently concluded Sri Lanka-India T20I series, taking 7 wickets in 3 matches at an economy rate of 5.58.Talking about Hasaranga, Hesson said: “We have an extensive scouting program, Wanindu has been on our radar for a long time. We aren’t surprised by his success in recent times, he has been doing it for a while. We like his skill set. We like the fact that he is a multi-skill cricketer, so he offers us the ability to bat a little bit deeper as well. That gives us a lot of exciting options.”

Rajesh Menon, Vice President and Head, Royal Challengers Bangalore talking about bubble protocol for RCB pointed: “In terms of bubble protocol we have a very tight protocol which is in place. This seven-day quarantine itself is what we have placed. The entire hotel staff, drivers are tested, everybody is part of the bubble. So it’s a complete secure bubble that we are getting into.”

As IPL again goes to the UAE, Hesson shed some light on the team’s advantage. He said, “There are players on both sides who have played in that condition a year ago. We have got some good memories of the last time we were there. We made the playoffs, we played nicely.”

Another Sri Lankan, Dushmantha Chameera also confirmed his place in the Bengaluru side. The fast bowler replaces Daniel Sams. Tim David, who is no stranger to the T20 format, replaced Finn Allen at RCB for the remainder of the season. After tasting success in T20 leagues around the world, the hard-hitting batsman and handy bowler will now test his skills in IPL.

The Indian players, support staff and the team management will be assembling in Bengaluru on Saturday following which the team will undergo 7 days of quarantine and will undergo Covid tests for 3 days during the period.

The team will then depart via a chartered flight from Bangalore on August 29. The other international players and staff will assemble in the UAE starting August 29 onwards. There will be another 6 days of quarantine in the UAE.Royal Challengers Bangalore resume Season 14 of the IPL on September 20 as they square off against Kolkata Knight Riders at the Sheikh Zayed Cricket Stadium in Abu Dhabi.