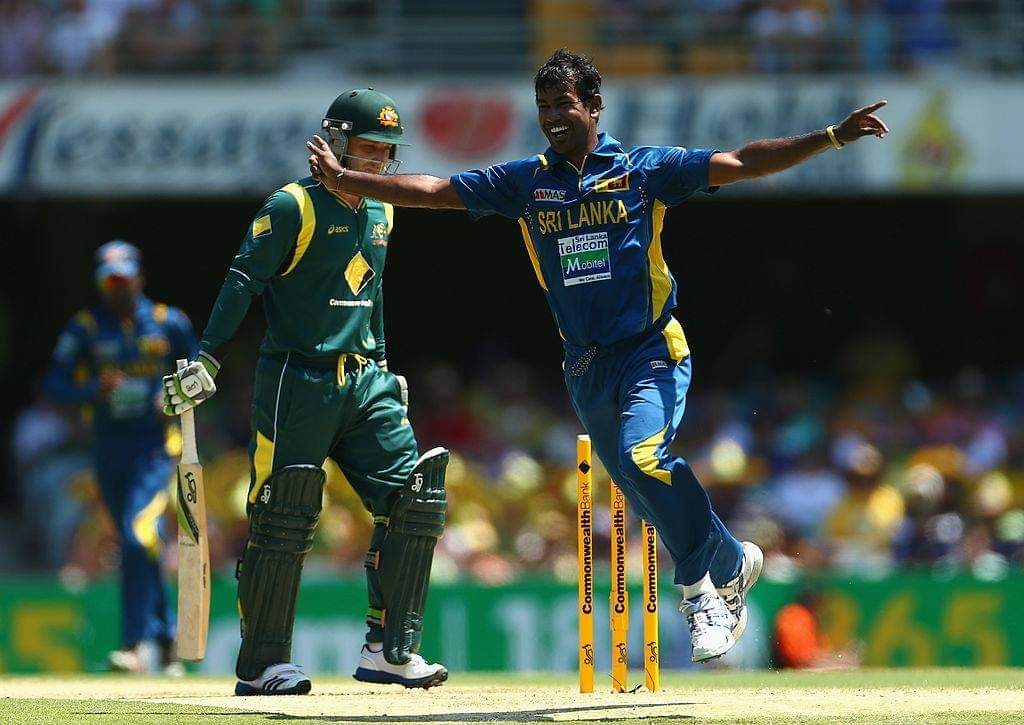 Imagine you are an international opening batsman. The bowler at the top of the mark is 5 foot 6 inches, sporting a pleasant smile and having a built which is not anywhere close to the ideal fast bowling physique. The chances are that you would fancy your scoring opportunities, when you see the ball wide outside off, your eyes light up, bat swings with force and all you hear is the death rattle behind. As you walk back all that you could think of is how did that ball even get through from so far outside off. That is the exactly the trap that many renowned batsmen have walked into like a herd of sheep,when facing Nuwan Kulasekera; Sri Lanka’s fifth leading ODI wicket taker with 199 scalps.

Kulasekara should have been anything,but a fast bowler. With a fragile built and a warm personality he had no right to seek memberdhip in the menacing fast bowling club. But he chose to do so. Kulasekera was the fast bowling equivalent of that kid you give no chance at school, but yet ends up beating the odds surprising one and all.

Having made his debut against England back in 2003, his initiation into international cricket wasnt of much note. With a strong line up consisting the likes of Vass, Malinga, Dilhara and Maharoof Kulasekera’s chances were limited. Infact even in the 2007 World Cup Campaign Kulasekera was mostly confined to the benches. However post 2007 with the legendary Vass tailing off, Kulasekera got consistent opportunities, made the most of them and  phenomenally rose to the top of the ODI bowling rankings by 2009, an honor that eluded the even greats of Sri Lankan bowling like Vass and Malinga. Kulasekera’s break through year was 2008 when he picked up 47 ODI wickets contributing to his ascent to the top. Whilst Malinga started to take care of the death overs, Kulasekera owned up the opening phase. It would be quite understandable for one to wonder how was this even possible in a world dominated by the likes of Steyns, Lees and Akthars that a medium pacer at best, could outdo the much fancied compatriots. But for anyone who closely followed his career the answer was obvious, consistency!! While the rest showcased sparks of brilliance intertwined with interminent lay offs, Kulasekera was at it, day in day out, just like a craftsman working on his masterpiece.

The ability to hit the correct line and length ball after ball is integral to any bowler’s success, irrespective of the pace generated. Whilst many compromised on consistency for the much adored pace, Kulasekera stuck to what he possessed. An impeccable ability to be consistent. As an ardent fan of Sri Lankan cricket, one of the worst feelings was to see a batsman score of Kulasekara through the off side when the ball rarely failed to come back into the right hander or may through the leg when it moved exorbitantly. This is proof to the fact that how consistent he was and waywardness in any form was a rarity. For someone who didn’t have the aura of pace of other physically gifted compatriots, this skill became pivotal. Kulasekera not only exploited this ability but also took it to a whole new level, executing plans with perfection in high pressure situations. Kulasekera also became Sri Lanka’s go to bowler at the death along with Malinga and there was a sense of assurance that more often than not that the duo would seal the deal.

Despite his new ball skills being the highlight throughout his career,his most impactful contribution perhaps came with the old ball in the 2014 World T20 finals. Partnering with Malinga, Kulasekera employed a wide yorker tactic which left the likes of Kohli, MSD and Yuvraj to accelerate in the in a crunch phase. Planning is one thing, execution is another. Being able to execute that plan to perfection under immense pressure spoke volumes about the control over line and length he had and the nerves of steel that laid below the easygoing outward personality.

Coupled with the line and length it was the ability to move the ball into the right handers that made Kulasekara special. This ability was on display throughout his career but the highlight quite aptly came down under on a sunny January afternoon.

In an exemplary display of swing and seam bowling Kulasekera caused havoc in Brisbane in 2013 against a formidable Australian line up Cleaning them up for an abysmal 74 . Batting first in critical game with series level at 1-1 the Aussies were in for a rude shock. Gabba is historically known to send shivers down touring Asian sides’ spines. A small built Sri lankan medium pacer, making the mighty Aussies dance to his tunes would not have been a possibility even in the wildest of dreams of any ardent Sri lankan fan. Kulasekera made the ball behave as if a string was attached to the ball,delivering wildly swinging deliveries moving into the right handers and away from the southpaws. Kulasekera opened his account by squaring up the late Phil Hughes making him edge to the packed slipped cordon. He followed up that with a in dipper that took the inside edge of David Hussey putting the Australian top order in a state of shock. If the ever reliable George Bailey was a ray of hope for Australia it was short lived. Bailey was left bewildered trapped plumb in front shouldering arms to a prodigious inswinger. When you get a batsman of such quality, dismissed in that manner it shows the level of skill that was on display. Things got even better as the Australian skipper Michel Clarke to missed an inswinger which rattled the timber leaving the mighty Aussies in a mess. The same pattern repeated as Kulasekera completed the first and only five wicket haul by a Sri Lankan on Australian soil as he cleaned up Mosies Henriques. Who would have thought that it would be Kulasekera who would own the best bowling performance (5-22) by a Sri Lankan on Australian soil and in fact in Australia vs Sri Lanka clashes for Sri Lanka. If anyone were to ask how a player with a boy next door physique went on to achieve such great heights, this display of swing bowling would provide the answers. However it was not the only instance where he ruled over the mighty batters of his era.

Another memorable moment came few years earlier in 2009 at Lahore. In front of a packed Lahore crowd, Pakistan were in a spot of bother at 20/5 chasing Sri Lanka’s 309. In a series decider the last hope for Pakistan was their favorite son Shahid Afridi. With Hopes high Afridi lifted his bat high shouldering arms to a trademark Kulasekera in swinger leaving the fans high and dry. It was just an one off event but the skill of Kulasekera outplaying the might of one of the most feared batters of our era was certainly a high that will be etched In Sri Lankan hearts

However if we focus solely on his bowling prowess it will be gross injustice to the all round capabilities he showcased. Kulasekera played some pivotal knocks which actually were worth their weight in Gold.

The first such instance was in the 2011 World Cup. Sri Lanka were in a delicate position at 182 for 5 having suffered a usual middle order collapse. Kulasekera together with Mahela not only resurrected the innings contributing a valuable 32 off 30 in a partnership of 66 at more than 8 runs an over, but also helped set a platform which would enable a late onslaught. With probably a World Cup final fifty in sight Kulasekera selflessly sacrificed his wicket in a mix up putting the team before first, an attitude he showcased throughout his career.

Within few months, in the first final of the CB triangular series in Australia, Kulasekera notched up his highest score of 73 in merely 43 deliveries smashing the likes of Lee, Pattison and Watson to all parts of the Gabba. He gave Sri Lanka a glimmer of hope smashing the Aussies through mid wicket and cow corner coupled with exquisite off side play. It was a display which would have made any top order batsman mighty pleased.

His most valuable contribution with the bat however would follow in the Champions Trophy game against England in 2013 where he scored 58 off 38 deliveries and forged a pivotal 110 run partnership in 71 deliveries with Sangakkara helping Sri Lanka chase down a mammoth English score of 293, eventually paving way for a semi final birth. It is worth noting that it was in this game that Sunil Gavaskar famously referred to the ploy of sending Kulasekara up the order as employing a night watchman in ODI cricket. It was a knock which not only left the spectators in awe but experts lost for words as well.

The knocks highlighted here are some of his best. But whenever the chips were down and somebody had to stand up, more often than not the little man with a big heart stood up

Kulasekera truly was a class act in his own right. The more flamboyant counterparts obviously overshadowed him but nevertheless his contributions will and shall forever be remembered. Nuwan Kulasekera was a phenomenon which showcased to the world that it’s not what you have but what you do with what you have is what matters. He wasnt the most gifted but he had the biggest of hearts and that’s what counted at the end of the day.