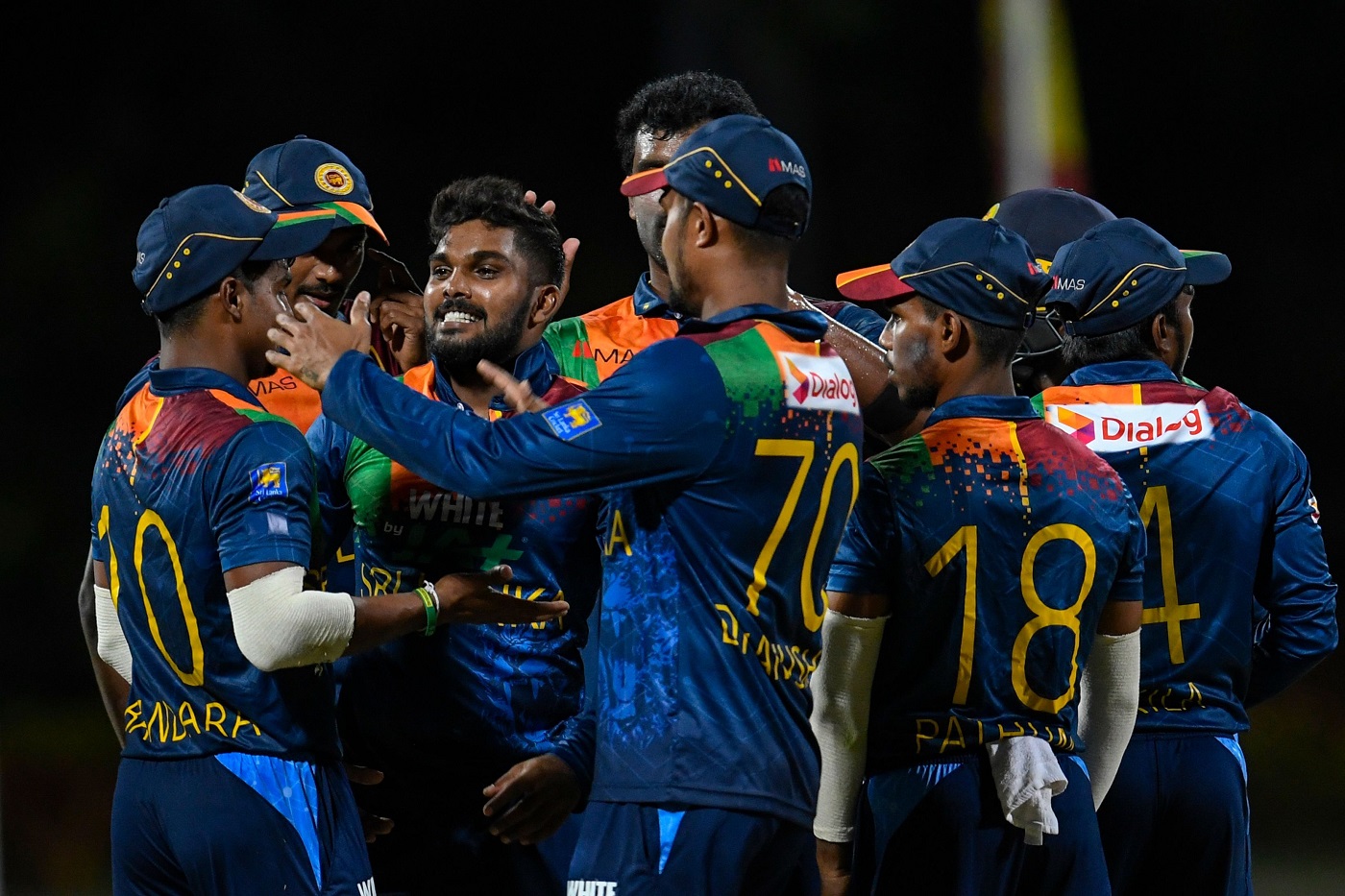 Wanindu Hasaranga (C) of Sri Lanka celebrates the dismissal of Chris Gayle of West Indies during the 2nd T20i match between Sri Lanka and West Indies at Coolidge Cricket Ground on March 5, 2021 in Osbourn, Antigua and Barbuda. (Photo by Randy Brooks / AFP) (Photo by RANDY BROOKS/AFP via Getty Images)

Now I personally believed that Pathum shouldn’t get a chance, But after his magnificent inning against PNG, The other day but Dasun had earlier said that they would look to Play the Same 11 in the Qualifiers but, I think SL Should drop Nissanka after a handful of chances (All the qualifiers) and if doesn’t sucseed he should Play in the Super 12s’ stage (Hopefull we’ll qualify!) His stats in T20Is are 6 matches 115 runs, at an average of 23.0 and a amatuer strike rate of 101.8. (Without the stats of the Warm Up Matches)

Now Sri Lanka’s key Batsman Kusal’s fitness isn’t guaranteed yet, He could play or not he is easliy SL’S Best Batsman and he should play with an attachking intent as Pathum has taken up the responsibility of the inning, for now KJP Brizzilant stats boasts 51 innings, 1416 runs at a good average of 27 and a strike rate of 132.2, Opening him gives the L/R partnership as well

If KJP is unfit (Which would be a huge prob for sl) Sri Lanka should Play Chandi, For one thing he is a much better keeper than kusal and for another thing, He is a attacking batsmen as well, His stats are average as he has 957 runs at an below-par average of 19.9 and an even poor strike rate of 106.3!

DDS, Perhaps the most contrevesional pick in both the squad and by me, He’s recent form in the Warm up match doesn’t support him either, And I laughed when I saw that DDS Has more sixes in Test Cricket than T20S and ODIS Combined! but who else suits at 3 and could shift Strike so well? Charith of course! But I just feel that Charith doesn’t suit at this position, He’s more of a ODI Specialist, and that SLC Should look to get him in the test side as well, Of course a lot won’t agree with me, But Dana also gives them a spin option- and should bowl some overs as well, But depending on his performance against Ireland My next article could differ, As he is on the edge of going home, With young talents like Charith (Maybe Bhanuka), Ashen, pathum. His stats doesn’t support his as well because he has 412 runs at an average of 20.6 (Which is OK), And a strike rate of 108.4.

Now then I was very happy when Dasun and obviously mahela decided to demote Avishka to 4, That’s where he’s suitable he’s a mixed player can attack as well as rotate his strike, he can Suit for where he bat’s for example if SL are 2/2 or 12/2 he needs to keep rotating strike and build a strong partnership, On the other hand is SL are 145/2 (16) he needs to attack and go at a SR of around 160, So Avishka at 4 is going to be Perfect Look at his recent form, Delicious!, Sri Lanka have found the young talent they wanted for so many years post the retirement of Mahela and Sanga a 23-Year old who could change according to the situation! His stats are’t that good as he as mustered 389 runs at 23 innings at an average of 17.7 and SR 107.8

Dasun Seems to have found form! Bowled well in the Warm ups !Batted really well against Oman and he has a big job at 6 now you might argue why Dasun comes ahead of Chamika, But I beleve Dasun should come ahead of Chamika due to a major matter of facts, SLC’s Batting could never be trusted so Chamika should get overs 15-20 but NOT Before that now if SL are 42/4 then the perfect person to fiddle around and build a partnership is Dasun if they are at 142/4 (16) then Chamika SHOULD come ahead of Dasun, THE SL Skipper could also bowl his part of overs, if nececarry he has got his slower bowl and back of a hand deleveries good his stats read 662 runs in 49 innings at an average of 16.6 and strike rate of 110.0 while he bowls he has 16 wickets at an average of 22 and economy of 7.54

Chamika should come in ahead of Hasaranaga because he is the X- Factor with the ball not with the bat. Chamika has shown his class with the Bat in numerous moments as he has bailed SL Out of trouble (2nd T20 against Oman), Chamika’s mix of power hitting and shifting strike makes him one of the most exciting youngsters, In addidition, His bowling is also well balanced and can chip in with wickets at times as  well, His stats boast 104 runs in 6 innings (4 NO) With an UNBELIVABLE average of 52.0 and an even better Strike rate of 128.4 with the bowl too he gives Sri Lanka’s the required all roundness with 5 Wickets in 7 innings at an average of 31 and an economy of 8.35

Lanka’s X – Factor for the T20 WC BEFORE We saw the pitches in IPL, Seriously he’s number 2 in Bowling Rankings, A Super smarty with a Brilliant Googly and a great Leg Spin, One of the best in Sri Lanka’s history, hasi also gives us a handy chip in with the bat as I said earlier why Chamika should bat ahead of Hasaranaga, Hasarangas should bowl atleast 1 over within the powerplay, Why? Everybody who watched KKR’S IPL Matches know why! Now the pitches in UAE Have a lot of clay and acording to Mr. Susantha Hasaranga and the other spinners should increase their speed and that I also hope that Mahela looks into that now, Looking at Sri Lanka’s X- Factor’s stats he has gathered a total of 200 runs in 22 innings to say that he’s average is 12.5 (Not so good!!) and has a Strike rate of 107.. He’s bowling stats read 36 wickets in 23 innings at an superb average of 15.5 and an economy of 6.5

Ranked among the top 20 in the ICC Bowling rankings is impressive, Sri Lanka’s First fast bowler and the opener with  the ball, He has shown his speed as well, Because he often goes above 140+ And from the Likes of Rabada and Nortje we have seen why we need super fast bowlers and looking at ours too if we start with Lahiru and Dusmantha we have a speedy “start” Chameera’s stats read 31 wickets in 31 innings at an average of 27.2 and economy of 7.77..

Theekshana is Sri Lanka’s 2nd Spinner, Man of the match in the final of Abu Dabi T10 Leauge! And as dasun stated Maheesh won’t be easy to read for any team and because of his Carrom balls and the fact that he bowls like the only player to get a 6-fer on the T20I WC, Gives him A Plus Point, although his stats aren’t that good ( 2 wickets for 137 runs at an average of 68.5 and a economy of 6 .85) He will be hard to read.

Lahiru questioned the Team management why he was dropped from the shorter formats for soo long he showed his class in the First match by getting a 4-fer and a 2-fer to follow in the 2nd oman match, He also showed that he can bowl yorkers in the death as well, So the perfect person to share the new ball along with Chameera is Him, Lahiru has got 12 wickets in 9 matches at an superb average of 20.9 and an economy which he’ll work on as it is over 8.20