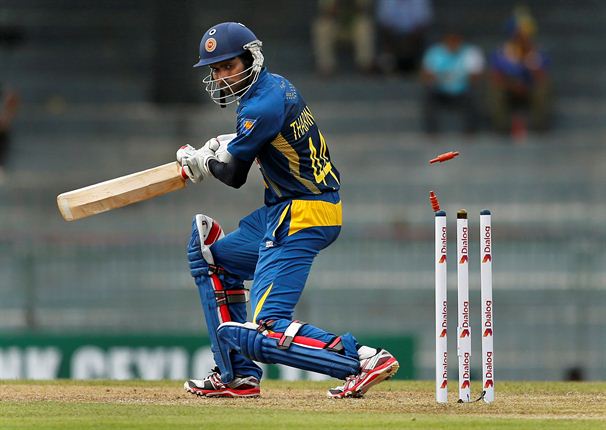 Hello all, this is my opinion on what the Sri Lankan batting order should be. Feel free to criticize. As a Sri Lankan who grew up in Australia, Sri Lanka’s previous limited over performances here have been something I’ve always took pride in. So it is very sad to see them face a whitewash of this magnitude.

Growing up, playing a lot of local club cricket, and hence listening to the coaches and Australian commentators on TV, I’ve always been taught the importance of playing the line with a straight bat. If you watch Smith and Warner carefully, they use a straight bat throughout their innings, even for squarish cover drives and leg glances, turning the bat at the last moment to guide the ball. I’m not saying this is how they play all their shots, but a majority. Compare that to Dickwella, who got out on both of his innings playing angled half-hearted shots trying to get a single. If he played those with a straight bat, the chances of the ball ballooning up are considerably diminished. It is too much of a risk to be taken for a single.

Of course I do not have the level of knowledge most of you guys process. And I’m still not sure about the middle order. But this is purely for discussion and please here me out. I’ll tell you the reasoning for picking and omitting certain players.

One of my omissions I’m sure will be criticized upon is Kusal Mendis. I’ve always thought he is not t20 quality yet (and I’ll say again that he is our best batsman behind Mathews, just not suitable for t20s). He takes up a lot of dot balls creating pressure for the batsman at the other end,  causing them to make rash shots to improve the run rate. And he lacks the ability to consistently rotate strike. I did see him playing a nice short arm dab to third man in the third t20, but he needs to do this more often. The last time Kohli and Rohit were here, I remember them playing a backfoot dabs to third man for almost all of the good length balls outside off. Mendis may make a few boundaries late in the innings to make up for his dot balls and make his score look decent, but he doesn’t allow to get the maximum from powerplay.

The main reason you guys gave for his selection was his form in the New Zealand series. But all of those innings happened just as I said, lots of dot balls and a couple of boundaries to make up. I watched all 3 games and one thing I noticed against NZ was that his main weapons to get maximums were pull shots and hook shots to the leg region. He may have pulled it off in the small sri lankan grounds but its considerably harder to do in larger Aus grounds. This was evident as two of his dismissals came from pull shots, which he actually timed really well. He simply lacks the strength to clear large Australian boundaries with his main scoring weapons. Eating up dot balls in the powerplay apply to other players too, like Gunathilaka. This causes our players to make necessary shots. Then too many wickets fall and the damage is unrecoverable.

So I think having a couple of guys higher up the order who can at least get a moderate total without the fall of many wickets is the way to go. Given time I’m sure all of our players has the ability to adapt to Australian conditions. But they simply do not have that luxury. Not qualifying for the world cup directly may even be a good thing as that allows us more time to warm up. My preferred XI is as follows (again, just for discussion, my opinion is always subjected to change depending on player performances):

1)Avishka Fernando (I know he didn’t deliver as we would like. But he demonstrated the ability to keep the strike rotating and we all know he has the ability to clear the boundary. So a few more games under these conditions, he should be good to go. I actually think fast and bouncy conditions really suit his batting style. He keeps an straight bat like many aussies and I was really impressed by his back foot punches to the cover region to get off the strike)

2)Kusal Perara (Surprisingly, most of this guy’s scoring shots weren’t off a straight bat. But he has powerful forearms (just like Maxwell and Chris Lynn who are power hitters in the Australian setup) and allows him to excel in almost any condition.

3)Oshada Fernando (Again didn’t live up to the expectations but he has the ability to play with a straight bat and rotate the strike, did okay in the PM’s XI game)

4)Angelo Mathews (I’ve seen him play some gems of innings in the Australian soil and I think we need a bit of experience to solidify the batting order in the middle. He is not what he used to in limited over cricket but he has the ability cushion the damage if too many wickets fall early. Probably the batter with most experience in the Aus conditions)

5) 6) 7) and 8) Bhanuka Rajapaksa/Shehan Jayasuriya/Dasun Shanaka/Isuru Udana/Lakshan Sandakan/Wanindu Hasaranga/Anyone else who performs (These positions I cannot give much of a verdict about. I think they should be picked depending upon the ground conditions with a unchanging top order as I stated above. Some of the players like Isuru Udana and Dasun Shanka weren’t allowed to display their ability in the designated power hitting roles due to early top order collapses. Therefore, it is hard to determine how they will perform in Aus conditions as power hitters)

9)Lasith Malinga (Captain and the most experienced bowler. Probably should give up captaincy (ideally to mathews). But I doubt it will happen. Hopefully the new coach will make some changes)

10) Nuwan Pradeep (Was our best bowler)

11)Lahiru Kumara (Needs to be given a solid run. Was really impressed by his death bowling in the PM’s XI game. Although he went for runs, managed to beat the bat multiple times in what probably is the least pace friendly pitch in Australia. We could only imagine how well he would’ve done at Gabba and Adelaide)