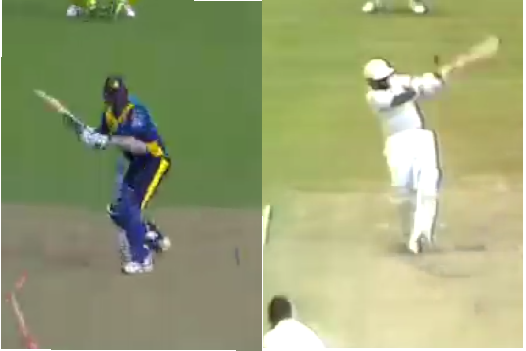 Mathews and Aravinda are very different players. Both are hero’s of Sri Lankan cricket. The above pictures were taken during two matches. The left one was the dismissal of Mathews in the last match vs Australia while on the right Aravinda is playing bouncer for a boundary during his 267 against Australia. Aravinda loves to pull and hook. Mathews has different shots. He prefers lofted drives and slog sweeps. Look at the below comparison.

Mathews getting out to short pitch deliveries at crucial times

When chasing such a huge total specially after bowling very tight dot balls whenever you see a opportunity to score from a delivery you take the risk. When taking such a risks you tend to get out similar fashions in similar situation. But we can see that oppositions have specific plans at you when trying to dismiss you. However you practice at nets for short pitch delivery. When you have lot of pressure it is very hard to chase such targets.

What Mathews can learn from Aravinda

They are very different players at two different time periods. The game have different set of rules and now the situation is very much different. But Mathews can improve his game by including Aravinda’s strategies. Instead of hating facing short pitch deliveries. He can wait for short pitch deliveries to clear the field. It will be huge scoring option for him. Aravinda is not a tall batter so he can use length delivery for pull and hook.

Once Aravinda said it is ok to get out by trying score than get out while trying to defend.  So attitude should be to score and attack the fast bowlers. You must attack fast bowlers. If you try to defend all the time the dot ball pressure will make you play risky shots that are not necessary. If you cant dominate over the top fast bowlers then it will make it difficult for you to win.

As said before two pictures shows that Mathews is not in a good position to play the shot while Aravinda aggressively trying hit it with a good balance. Aravinda is rotatting his body towards the mid wicket area while Mathews not trying rotate his body. Two different approaches. But two different results. Aravinda was able to win the world cup with the man of the match at the finals while Mathews haven’t won a 50 over world cup yet. He has the potential , what you need is your mental strength. Aravinda used to say that you have think that you are the best batsmen in the world and you can attack any bowler. That attitude will help you to achieve more success.

But I think Mathews is more potentially gifted and more confident batter with good technique what he has to do here is that he can take this tip to his strategies.