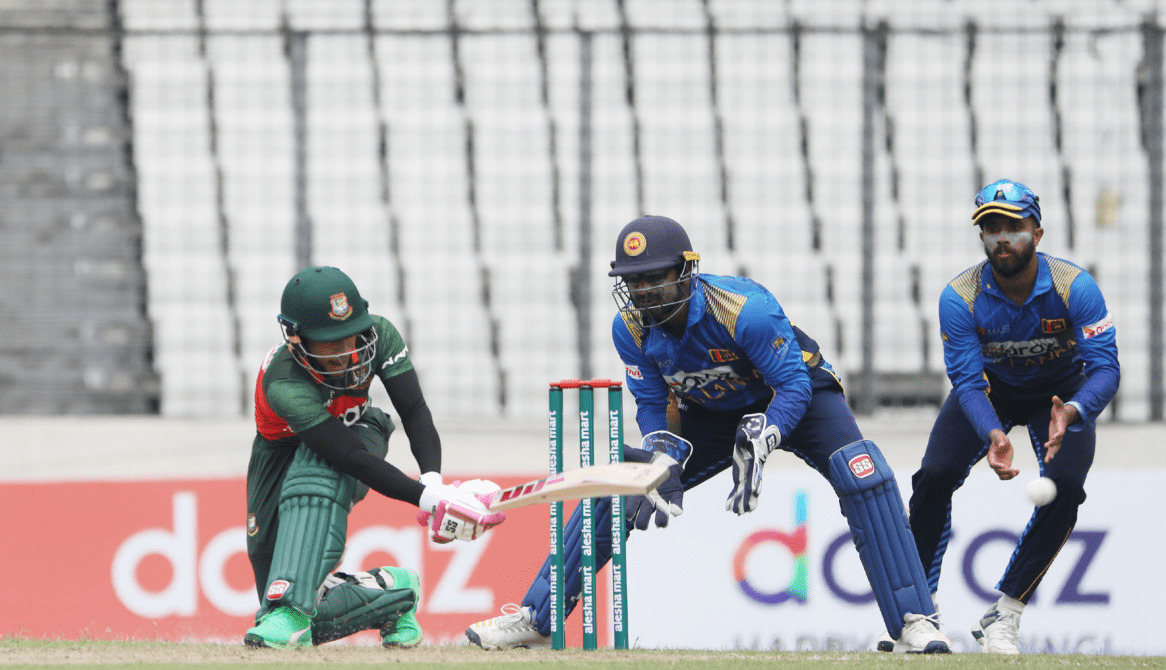 My personal view is that we could have won the first match if the following issues were addressed properly, by the tour selectors, coach and the captain.

(a)  For the crucial first match (1st ODI) where our aim was to get 10 points to improve our status/position on Super League ranking, we should have picked only one newbie (either Pathum or Ashen). All our inform senior batters including Dickwella should have played. (b) As I commented in my earlier post we must include four strong/effective bowling options for all matches, means 3 fast / 1 spinner or 2 fast / 2 spinners (depending on the pitch conditions).

According to the batting order, it will be;

(a) To get the maximum from Dika he must bat during initial PP overs to execute all his non-conventional (but successful) shots in scoring more 4s/6s.

(b) As there are many aggressive batters in the line up both Kusals should play anchor roles and target to score longer innings and give freedom to the partners to score quick runs.

(c) Wanidu should be promoted. Initially he can bat at no 6. After some guidance by the batting coach he can be transformed into our Power Hitting Opener. He needs to be perfect in his shot selection, and not to hit at every ball.

(d) Dasun has to do a 360 degree turn in his performance level. No one wants you to be like the way you batted yesterday.

(3) Can Sandakan be considered as a strong/effective bowling option ?

(a) In my opinion, NO. Reason, I am not yet convinced that he can consistently maintain an accurate line & length (when compared to Wanindu, Akila or even Ramesh). He is not able to bowl effectively to left handers. Even today he proved all these three shortcomings in his bowling, especially his ineffectiveness to the left handers, which was mentioned today by our own Roshan (commentator). BD batters were very careful during the first 20 odd overs when facing Chameera, Udana & Wanindu, but their target was Sandakan. This was obvious when they scored the first six in the match in Sandakan’s first over. He gave away 24 runs in his first 3 overs and was taken away from the attack by the captain. Due to these shortcomings in Sandakan’s bowling I am not able to consider him as a strong / effective bowler. Means our captain has to distribute 20 overs among two part timers & Sandakan. Therefore our bowling lineup yesterday was weak (this could have been the major reason for our defeat)

(b) We need to have a strong / effective second spinner who can bowl wicket to wicket, I don’t know whether he is Akila or Ramesh ?. Selectors have a task here.

(c) See how BD two spinners were bowling yesterday. It was a superb piece of bowling.

(4) Why Dasun Shanaka was not given a single over to bowl. ? What happened to his power(six) hitting ability? Do we need him to play a waiting game?

(a) We must not forget one thing. He is a replacement for Thisara. So he should perform as a Power hitting fast bowling all rounder, nothing less than that. None of these qualities were demonstrated by Dasun yesterday. Either it was a mistake of the captain (not giving a single over to him) or the coach. Are we going to accept this kind of performance irregularities among any of our players? Or are these formalities applicable only to non-established newbies? Dasun should not be in the same boat of Angelow. Means after getting established in the team, give up his major performance levels like the way Angelow became a non performing fast bowling allrounder for the name sake only. Shouldn’t we apply deductions to the match fee for Dasun (if he is at fault) as assured by our new committee? (b) I also blame Dasun as one of the reasons for yesterday’s defeat. If he had played according to his past glory and true potential, he would have not only been a part of a great partnership with Wanindu but contributed for a great victory for Sri Lanka. Udana of course gave his maximum support to Wanindu but unfortunately Wanindu lost his wicket prematurely and Udana was left to bat with two tailenders. (c) I would request the captain to give few overs to Dasun in every match. Coach should take care of getting the maximum output from Dasun’s true capacity & ability. Beside bowling few overs, Dasun must achieve the following Power Hitting abilities (KPI’s) he has demonstrated all these years.

I trust that our coach and the think tank will agree with my every comment and try their best to boost up the performance levels of some vital /crucial performers.