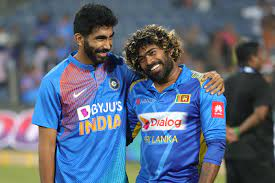 Lasith Malinga announced his retirment from all formats of cricket yesterday, He posted a video about it in his youtube channel

195 Wickets for Malinga while representing Mumbai Indians, the most by a bowler for a team in T20s. He took a wicket with his second ball on debut, while his last ball ended up producing a championship-winning scalp.

38 Wickets for Malinga in Men’s T20 World Cups, which is eclipsed only by another legend, Pakistan’s Shahid Afridi (39). Malinga’s 38 strikes were best by any bowler at the time of his playing his last T20 World Cup match in 2014. He missed 2016 due to an injury.

6 for 7 Malinga’s best bowling figures in T20s came in the 2012-13 Big Bash League for Melbourne Stars against Perth Scorchers. Those figures are still the best in the history of BBL cricket.

107 Lasith Malinga signs off as the leading wicket-taker in Men’s Twenty20 Internationals, by the narrowest of margins. He has one more than Shakib Al Hasan (106). Malinga became the first man to scale the peak that is 100 T20I wickets in 2019, while playing against New Zealand.

170 Wickets for Malinga in the Indian Premier League, the most by any bowler. In 2013, he became the first player to complete 100 wickets in the league and progressed to 150 ( in 2017) before anybody could catch him as well.

390 Malinga ends his career with 390 wickets in T20 cricket, the fourth-highest among all bowlers. Malinga was the leading wicket-taker in this format between February 2014 and April 2016, before Dwayne Bravo went past him and emerged as the first bowler with 300 T20 wickets.

7.82 Malinga’s economy rate in death overs (17-20) in IPL, the best among 41 bowlers to have bowled at least 250 deliveries in this period. He bowled 152.5 overs at the death of an IPL match and conceded only 1196 runs while claiming 90 wickets, which is also a league record.

37 Wickets for Malinga against Chennai Super Kings, the joint-most for any player against a single opponent in T20 cricket. Andrew Ellis also had 37 strikes against New Zealand’s Northern Districts.

5 Five-wicket hauls for Malinga in T20s, second only to David Wiese. Two of those came in internationals, also the joint-most for a bowler. The Sri Lankan pacer leads the list of most four-and-more-wicket hauls in T20s, with as many as 15 to his name.

152 Wickets out of Malinga’s 390 in the T20s were ‘bowled’, the most for any player. Those 152 wickets are also equivalent to 38.97% of his career wickets, the highest proportion for anyone with 200-plus wickets in this format.

9 Instances of Malinga claiming wickets on successive deliveries in the IPL, but none of them were converted into a hat-trick. Only Umesh Yadav (10) was on a hat-trick more often than Malinga, while Imran Tahir has also done it on nine occasions. Malinga had seven such instances in T20Is, out of which two turned out to be hat-tricks, making him the only bowler with multiple hat-tricks in this format. Only Umar Gul (8) had more opportunities than Malinga to pick up a hat-trick in men’s T20Is. He never ended up with one.

He captained the Sri Lankan 2014 T20 World Cup winning side. He is a right-arm fast bowler that is commonly used as a specialist death bowler, and is well known for his distinctive round-arm action, sometimes referred to as a sling action, which leads to his nickname “Slinga Malinga”.[4] Malinga had announced his retirement from all forms of cricket on 14 September 2021.

On 22 April 2011, he announced his retirement from Test cricket.[11] He has been named as the official event ambassador for the World Twenty20 Championships by ICC.[12] On 26 July 2019, he retired from One Day International cricket after the first ODI against Bangladesh.[13]

In September 2019, during the series against New Zealand, Malinga became the first bowler to take 100 wickets in Twenty20 International cricket.[14] Malinga took a hat-trick to become the first bowler to claim two T20I hat-tricks, and four wickets in four balls, in the third over of his spell, while becoming the second bowler in the world to take four wickets in four consecutive balls in T20I history after Rashid Khan during the process.[15]

In January 2021, he retired from T20 franchise cricket.[16] In September 2021, Malinga announced his retirement from all forms of cricket.[17]

PLEASE NOTE THAT THIS ARTICLE WAS WRITTEN, FOR A TRIBUTE FOR SLINGA AND I DIDN’T RIGHT ANYTHING, ALL THE RIGHTS BELONG TO RELAVANT OWNERS