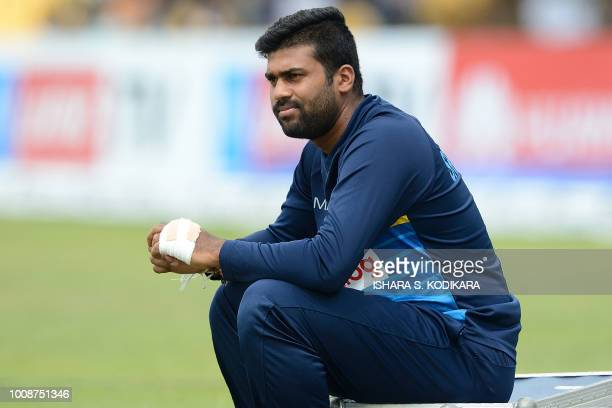 Sri Lanka’s win against Oman yesterday was a good win given the current form of the team in the T20 format. However, Sri Lanka’s win wasn’t convincing to any point but a win is a win and it will certainly boost the confidence of the team going forward. If we are to look at the positives of the game then it would be the fact that our batsmen faced fewer dot balls and were able to work the ball into gaps to gain singles regularly. Another positive note is the fact that both Avishka Fernando and our captain Dasun Shanaka found form with the bat.

However, for me, I believe that the performance of Lahiru Kumara was the true positive note for Sri Lanka as he was able to bowl his full quota of over and pick up 4 wickets for 30 runs but the impressive thing about this spell is that he went at an economy rate of 7.50. Now the reason and this is a positive note for Sri Lanka is because Kumara usually goes at an economic rate of 8 or above and doesn’t usually pick up wickets to make up for his expensive overs.

Now with an impressive performance under his belt, Kumara has opened a new opportunity for Sri Lanka to make a possible game-changing discussion that Nuwam Pradeep looks unlikely to play the world cup as a result of his injury during yesterdays game which is to bring Lahiru Kumara into the main team squad as he is currently a reserve player for the world cup. Now the reason that I am suggesting this is because Lahiru Kumara is an X factor given his raw pace as we saw him continuously trouble Oman’s batsmen regularly with his pace and bounce. Another reason why Sri Lanka should make this move is that the pitch in Oman won’t be that different from the pitches in U.A.E and will most probably offer good pace and bounce. Now let’s say that the pitches might not have pace and bounce but Kumara can still trouble the batsmen because his got pace and plenty of it as well.

In contention playing Kumara could backfire if he is unable to trouble the batsmen and pick up wickets. Furthermore, if he fails to control his economic rate and gives away expensive overs it could hurt Sri Lanka hence playing Kumara is a gamble as if he bowl and performed well as yesterday it would help Sri Lanka but if he is unable to take wickets and is expensive it could seriously hurt Sri Lankan. However, with the negatives aside I strongly believe Sri Lanka should move Kumara into the main squad as a replacement for Pradeep as he is an X factor and could boost Sri Lanka’s chances during the world cup as his pace will surely trouble even the best batsmen in the world.

In conclusion for this plan of playing Kumara to work Kumara’s economic rate mustn’t exceed 8. However, the most important factor for this plan to work is that our batsmen have to fire and be able to both set and chase big totals as this would allow Kumara to bowl with freedom and pace. All in all, if used right Lahiru Kumara can be a match-winner for Sri Lanka in the world cup.