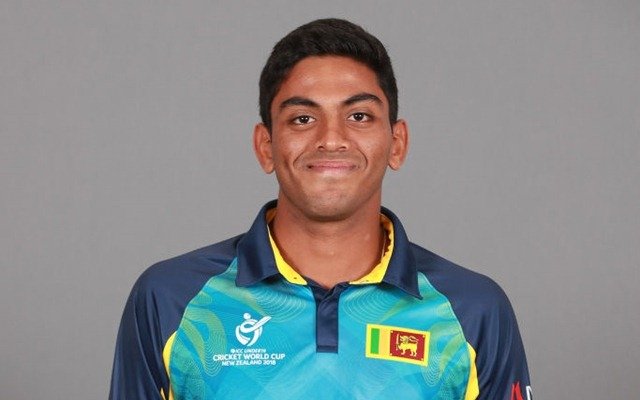 Kalana Perera – The allrounder who delivers when needed

Kalana Perera has been an emerging prospect over the last couple of years. At a time when Sri Lanka cricket has given a lot of pain and frustration to our passionate fans, Kalana has been able to give them a reason to celebrate.

Recently, he played a crucial role in the Battle of the Blues. He dismantled his opponents, where he took 9/156, and was also able to make an invaluable contribution with the bat as well. His allround efforts empowered the Thomians to a famous victory, when they won the Battle of the Blues after 12 years to secure the prestigious D.S. Senanayake Memorial Shield.

“It’s a proud moment for me. We have waited 12 long years. We have been working tirelessly for more than 6 months. We had good team spirit throughout and all we wanted was to win the D. S. Senanayake Memorial Shield,” Kalana Perera ( KP) recalled with pride.

Over the years, KP has been known for his brilliance with the ball, but in recent times, his batting has improved tremendously and, as a result, has scored 500 runs and taken 86 wickets this season so far. According to him, Hashan Thilakaratne had given him some invaluable advice, at the time he was representing the Sri Lanka Under-19.

“My batting improved when I was representing the Under- 19 national team. Mr. Hashan Thilakaratne gave me a lot of advice to improve my batting. He always wanted me to be a quality all- rounder and, at the same time, he wanted me to play according to my instincts,” he said.

“We played the Asia Cup in Bangladesh last year and came to the finals. So it was very memorable and, in the match against Pakistan, I scored my first half-century at international level.

KP has taken three five-wicket hauls against Royal, which itself is an incredible stat.

Recently, the Thomians went on a tour to Australia and he had an outstanding tour, where they went on to win the Chappell Brothers Challenge Trophy. This young left-arm fast bowler was adjudged Best Bowler of the Tournament.

“It was a great experience for us. I love to bowl in Australia. The pitches are great for fast bowlers. With my height, it was easier for me to take wickets. It was a memorable tour that we will cherish for many years,” he recalled with a sense of satisfaction.

KP’s cricketing journey began at Lyceum International School in Panadura, where he began to blossom as a cricketer. He didn’t forget to comment about his previous school, where he had learned the basics of the sport that he loved.

“When I was at Lyceum, I had no intentions of being a cricketer, even though I loved the sport. But our cricket coaches encouraged me to play cricket and said that I could be successful as a cricketer. And now I am on the verge of achieving my dream. I would like to thank all the coaches at Lyceum for identifying my capabilities during the early stages of my career,” he recalled with gratitude.

His career at S. Thomas’ College, Mt. Lavinia has been an incredible journey. He was well supported by his teammates and the coaching staff. The young Thomian did not forget to express his views on the Sri Lanka cricket team.

“We have a young set of players at present. There seems to be a problem in our temperament and we must not make frequent changes to the team, as it will affect the balance of it. I urge all the fans to keep cheering our team. I am sure they will play the brand of cricket we are known for,” he said.

Furthermore, he said he would like to thank all his coaches, his family and friends for supporting him

“I would like to thank Praneeth Pieris, the late Kapila Jayalath Nadeep Jayasinghe, Dinesh Kumarasighe and all the other coaches and national coaches ChamindaVaas and Hashan Thilakaratne,” he concluded.

Another Chaminda Vaas in the making, but with the ability to switch from pace to spin when the need arises, KP would be the ideal and complete allrounder the Sri Lanka team is looking for. With his multi faceted ability to bowl in two styles and bat positively, it will not be that far away to see KP don the Sri Lanka kit.