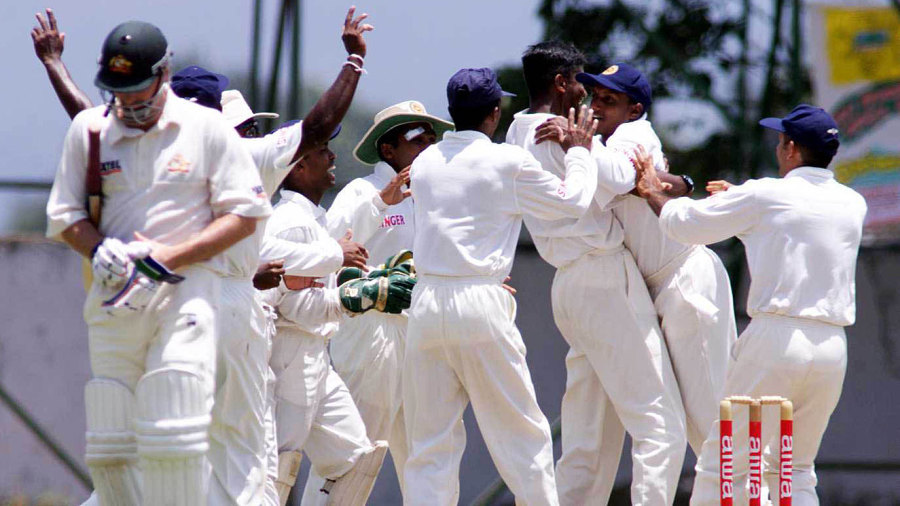 It was a happening Saturday afternoon at the picturesque Asgiriya stadium in Kandy. The ground was filled with spectators, the club house was a beehive of activity and in the middle were Aravinda De Silva and Arjuna Ranatunga. The legendary pair that saw Sri Lanka home few year back on a glorious night in Lahore.

Aravinda De Silva swept a leg break from Shane Warne to short fine leg. The ball went straight to the fielder who in turn threw down the stumps at the keeper’s end. As the ball ricocheted of the stumps the pair ran an easy single.

As anti climactic as it could have been, this was one of the most significant moments in Sri Lankan cricket history. For the first time in the acrimonious rivalry between Sri Lanka and Australia, the Lankans had emerged victorious in the ultimate format of the game

Since gaining test status the Lankans had been given step motherly treatment at the hands of the Aussies. Quite understandably so. With Sri Lanka being unable to mount a challenge ,tests against Australia was not a common occurrence. The closest Sri Lanka came to winning one was at SSC in 1992 where Shane Warne announced his prowess to the world and inflicted a regretful defeat which hurts even to date. In this backdrop this test match was a battle of two teams who were at different ends of the spectrum in team formation.

The Aussies had orchestrated an amazing trun around winning the 1999 World Cup in England. Sri Lanka on the other hand had a torrid tournament which led to wholesale changes in the set up. Many of the seniors were shows the way out amidst unpleasant circumstances and faith was placed in youth. Whilst Aussies had the Waugh brothers, Ponting, Healy and Warne, Sri Lanka were a young outfit despite of Arjuna and Aravinda’s presence under the leadership of a rather calm and quiet Sanath Jayasuriya. In this backdrop the chances of Sri Lanka pulling of an upset was rather rate to say the least. The nation was waiting to see how the turn around post the 1999 World Cup would be for Sri Lanka.

On the first day of the much anticipated test, Steve Waugh opted to take first lease of rather a lively wicket placing his trust on his top order. However the Aussies were in for a rude shock as the young Sri Lankan opening duo of Vass and Zoysa decimated the top order in no time leaving them reeling at 16/4 when skipper Waugh departed edging Zoysa to Aravinda in the slip cordon. The middle order couldn’t put up a resistance either as the Aussies crumbled to a below par 188 aided by a masterful 96 by Ricky Ponting and a 41 from Jason Gillespie. The late order resurgence had added some respectability to the score but whether it would be enough was to be seen. Vass, Zoysa and Murali had shared the quota of wickets displaying a clinical bowling performance

Sri Lanka were off to an inauspicious start as McGrath cleaned up Sanath Jayasuriya early followed by Russel Arnold offering no shot and getting trapped by Collin Miller. With the Lankan response on the verge of collapsing Aravinda came to the rescue playing a solid knock of 78, forging a 107 run fourth wicket partnership together with the young Mahela Jayawardena who himself scored 46 runs paving way for Sri Lanka to a lead of 46 runs which would prove to be handy given the conditions.  In the course or the innings the Aussies suffered a major set back when skipper Waugh and Gillepsie had a terrible on field collison attempting to catch a top edged sweep from Mahela Jayawardena. This meant the Aussies would be left without the services of the skipper in the third innings be one bowler short in the final defense which would be a major disadvantage.

The Australians did not fare any better in the second innings. Mark Waugh who was expected to lead the way in the absence of his brother was cleaned up by Chaminda Vass off the inside edge early on in the innings. The rest followed with the exception of Ricky Ponting again who played an impressive knock of 51 runs before tamely holding out to Upul Chandana full toss to short midwicket. With his dismissal the writing was on the wall for the Aussies leaving Sri Lanka with a tricky chase of 95 to achieve a historic win on a warm Saturday afternoon.

Sri Lanka tried to bulldoze their way to the target showcasing all out aggression. Skipper Sanath perished attempting to smack an off break from Collin Miller over cover skying a catch to point. Attapattu too had perished early for a duck presenting an easy catch to covers attempting to drive McGrath on the up. The promotion of Kaluiwtharana too did not yield the expected result for the Lankans. At 60/4 the haunting memories of the debacle at SSC, seven years back were starting to resurface in Sri Lankan minds.

The legendary duo of Aravinda and Arjuna ensured there was no such encore safely seeing Sri Lanka home. The partnership to had its share of drama when Ranatunga tried to send Warne to the cleaners but lobbed the ball to mid off where McGrath couldnt quite reach it. Ranatunga continued his aggression and rather successfully cleared the long on boundary off Shane Warne effectively sealing the game in Sri Lanka’s favor.

When Aravinda and Arjuna ran that single it was indeed a significant moment where Sri Lanka lifted the monkey off the back for the first time against Australia. A young team led by a new skipper had toppled a very well established unit which incidentally would go on to win 16 games on the trot, creating a world record after this series.

This match for some reason often does not get recollected when talking of famous Sri Lankan wins. But for anyone who witnessed this game live, there is no doubt whatsoever that it requires a mention alongside the greatest victories in Sri Lankan cricket.