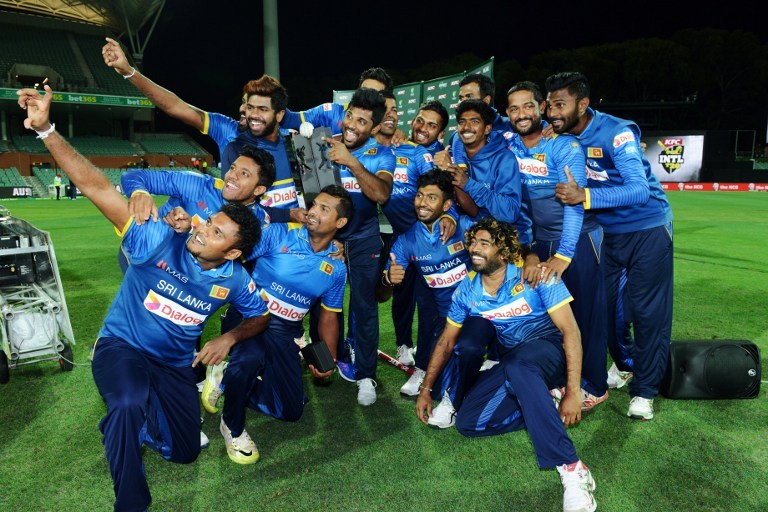 Sri Lankan players celebrate their T20 series win over Australia after the third T20 Cricket International at the Adelaide Oval on Febuary 22, 2017. / AFP PHOTO / Brenton Edwards / -- IMAGE RESTRICTED TO EDITORIAL USE - STRICTLY NO COMMERCIAL USE --

I have Named Dimuth Karunaratne as the captain not solely due to his success in South Africa, but recognise as a guy who can earn love and support from each and every member of the team including the head coach. All the other candidates, namely Angelo Mathews, Dinesh Chandimal, Lasith Malinga and Thisara Perera have some issues within them. That is well and truly reflected in recent results specially in limited overs cricket . I believe that is the main obstacle for our success.

Yes, there are lot of young talent in the scene such as Avishka Fernando, Oshada Fernando, Vishwa Fernando and out of form Niroshan Dikwella, Lakshan Sandakan..etc., but I’m going with experience for this showpiece event of our beloved sport.

Upul Tharanga’ record in English conditions is very impressive. Since this is an ICC event, pitches will not be pure English. That will reduce the probability of edging the ball as well 😊. Expect him to be little bit proactive than usual. Caliber of Tharanga’s experience will be invaluable.

The management should issue the license to Kusal Perera to go after the bowling from the word go. To do that, he must open the batting with experienced Tharanga. We are not a team who can score 120+ runs in final 10 overs regularly. We should play for our strengths than playing for weaknesses of the others. Play attacking cricket in the first power play will be key to our success. Who else can do it better than a person who blasts a 17 ball half century against a quality Pakistan bowling line up? 🙄 Another reason why I believe Kusal Perera should open the innings is his recent hamstring issues. Opening the batting will reduce the rotation of strike since definitely he’s going to smash the bowlers. Less running between the wickets will help him to avoid hamstring issues to a some extent. I want him to keep wickets because he’s a quality keeper and when we are chasing a target, his familiarity with the ball by keeping wickets for 50 overs will also be an added advantage.

I expect Dimuth Karunaratne to play the anchoring role with a 80 – 85% strike rate which may vary according to the situation.

If Kusal Mendis can little bit more responsible, his talent will do wonders to him personally as well as to the team. His ability to rotate strike as well as his six hitting ability will give him nod ahead of Dinesh Chandimal at no. 4.

Fully fit Angelo Mathews will be key to Sri Lanka’s chances in England in 2 months time. Need to be more responsible when running between wickets. At no. 5 his batting will be crucial to build a good total. If he can bowl few overs, it will be the icing on the cake.

If no. 4 and 5 failed to score big, there should be a backup at no. 6. Dananjaya de Silva is a promising young talent who has enough experience to bat under pressure. His more than part time bowling will be an added advantage.

Jeevan Mendis is my pick for the no. 7 position mainly due to his effectiveness with both bat and the ball. Here I picked him as the main spinner because Akila Dananjaya seems little bit ineffective after remodeling his action.

Then follows Thisara, even though slotted at no. 8, he can bat anywhere from 1-8 depending on the situation.

Isuru Udana’s ability to bowl in the death overs is important factor since it was our main weakness in the recent past. I prefer Suranga Lakmal’s experience over Kasun Rajitha to share the new ball with Lasith Malinga.

I believe this team can do something special in this upcoming world cup. I ask all the players to be UNITED at least for coming 3 months, please. If you can’t play for the country, at least play for the coach. Go for the glory lads. You can do it.