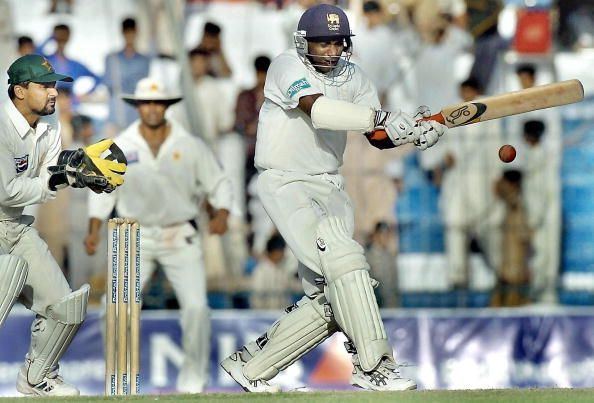 When thinking of Sanath Jayasuriya’s test career it wouldn’t be inaccurate to say that it was underwhelming compared to white ball cricket. This however wouldn’t be a surprise since his technique was unorthodox and very rarely people with unorthodox techniques perform consistently in the red ball formats. Despite of this there were moments of brilliance in Sanath’s test career too. The double century at the Oval in 1998, the triple against India in 1997 are few that come to the top of the mind. Apart from these there is an incredibly special knock which is often forgotten by cricket fans. It was a heroic know which paved way for a significant test win away from home at a critical point in his career.

The most challenging period in any legendary cricket’s career is the immediate aftermath when there relinquish captaincy. The 03/04 season was Sanath Jayasuriya’s corresponding period. With the reigns handed over to his long standing deputy Marvan Atapattu runs started to dry in Sanath’s terrain. Questions were being asked of his existence in the red ball line up. Despite an almost match winning 131 against a top notch Aussie attack at Asgiriya and a 157 against a depleted Zimbabwe in 2004, Sanath’s red ball returns remained mediocre. Poor returns in the series against Australia away and proteas at home were raising eyebrows. With the management backing him to the core it was high time Sanath returned the faith placed in him. At around 35 years of age it was challenging to say the least. It was in this backdrop that Sanath took wings to Pakistan in the latter part of 2004.

The first test in a two match series is always of utmost importance. In this specific game at Faisalabad going into the second innings Sri Lanka were trailing by 21 runs. Facing a rampant Akthar and Sami who had taken nine wickets betwee them in the first innings the Lankan skipper Marvan was back in the hut in the first over itself for a duck. The pressure was mounting and if there was a moment for Sanath to stand up and deliver this was it. With Akthar and Sami in good rhythm with a more than efficient Danish Kaneria leading the spin department Sananth’s chances of succeeding were in the balance. As the saying goes ” when the going gets tough, the tough get going” and Sanath got going. Sanath stitched meaningful partnerships with Sangakkara, Mahela and Samaraweers propelling the lead to 280 plus.

In the immediate aftermath of Marvan’s wicket Sanath mounted a counter punch flicking, cutting and driving the Pakistanin opening bowlers notching up the team fifty almost at run a ball.  When the Pakistani’s turned to the spin of Kaneria, Sanath did not show any signs of discomfort. He dominated Kaneria by scoring freely from point to square leg executing cuts, square drives and slog sweeps effortlessly. The dominance over Kaneria was signified in style when Sanath smacked a lofted on drive with ease to reach his three figures in style. The striking feature of this knock was the ease with which Sanath weared Shoaib Akthar off in his initial spells and then treated him harshly with aggresive backfoot play cutting, hooking and pulling in his latter spells as the tearaway paceman lost steam.

When the 8th wicket fell the Lankan lead was a healthy 316, challenging but not beyond the reach of a strong Pakistani line up. It was at this point that Sanath unleashed his magic replaying the faith the selectors had placed in him. Sanath single handedly added 101 runs for the 9th wicket with Dilhara Fernando where the latter contributed a grand total of one. During this phase Sanath’s dominance left the Paksitanis with no answer. A distraught Shoaib squatting on the turf until someone had to place his hat on his head after the completion of an over was a moment which which symbolized the state of affairs in the game. It was quote appropriate Sanath reached his double too with a pull over Square leg fetching him a six off Shoaib Akthar. This was followed by a twenty run over again off Shoaib and consecutive sixes off Malik over midwicket which left the Pakistani skipper Inzamam in a state of helplessness clearly visible on his face. After decimating the Pakistani attack when Sanath finally missed a full Kaneria delivery and was adjudged LBW by Bucknor he had not only amassed an amazing 253 but had put Sri Lanka well and truly in the box seat. The Pakistanis could not recover from the onslaught and succumbed to a heavy 201 run defeat handing over the Lankans a 1-0 lead.

It was an innings which not only set up an away win for Sri Lanka but also left a  reminder to the cricketing world what the master blaster was capable of even towards what seemed to be the twilight of his colourful career.  It would also turn out to be his penultimate test century. The final was was to follow in the next test in Karachi.

It was an innings which showcased Sanath’s strengths all around the wicket. An innings predominated by cuts and drives but sprinkled equally with pulls and hooks which are not quite normally seen in Sanath’s batting.

There were many other monumental knocks Sanath had played in all formats, but this knock played in a quiet corner of Pakistan in a low profile series against a high quality opposition shall always be given it’s due place in the Lankan cricketing folklore.