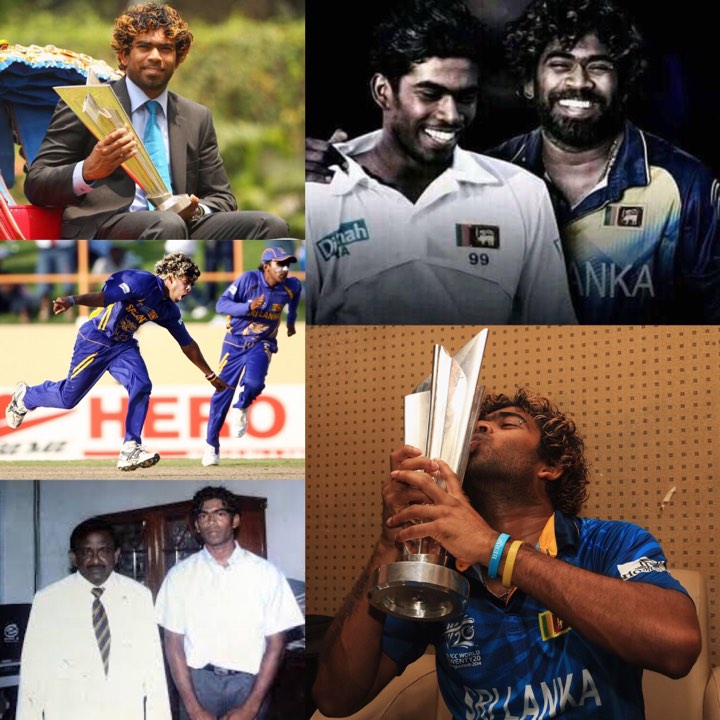 He was vetoed, the teenager was asked not to come to ball again because he was so deadly. An 18 year old svelte guy was bowling at the nets for the national team players in the year 2001 and soon he was injuring the batsmen hitting them at the body. ‘There is some bugger from Galle and we can’t spot him, we must tell Champaka not to bring him the players went on to make remarks, they were shocked to see this youngster and was scared to death that he might injure some player.

3 years later there were rumors going on SL media that a young boy of 21 from the coastal village, Rathgama with an infrequent action is set to travel to Australia. 1st July 2004 Sri Lanka played their 1st test match against the Aussies in Darwin, to open up the bowling with Chaminda Vaas it was a new kid freshly imported from the outskirts of Galle ready to take on the best team at that time. A lanky guy with a jet-black donkey haircut and a very unusual action; youngster with a unique round arm bowling action was seen troubling the strong Australian batsmen a few times. They were having difficulties of picking this bloke since he delivers from right below the face of the umpire. Dangerous Daren Lehmann was trapped in front for 57 by the adolescent and soon the same over saw Captain Adam Gilchrist getting a good short delivery to find himself caught by the Keeper, soon the boy called as the bugger 3 years ago was having two wickets in just 1 over. His first innings figures read 50 for 2 in 14 overs with 3 maidens. It was a low scoring encounter where the hosts won by 149 runs after scoring only 207 and 201 in the two innings, the Lankans could only manage 97 and 162 in the two innings. It was in the 2nd innings this new fast bowling sensation was able to make a name, made people talk about him. He showed that he had pace, bounce and his Yorkers were spot on. 4 wickets for 42 runs in only his 2nd test innings against a strong batting line up like Australia in Australian conditions was showing glimpses of yet another brilliant fast bowler from the island nation. His figures on debut were 29.1 overs 6 maidens 92 runs and 6 wickets. The Slinga who was playing cricket in sand banks and coconut groves by the river was introduced to world Cricket!! A unique, fierce deadly character was revealed to the Cricketing world. Thank you Champaka Ramanayaka. For the next 15 years it was a story of him kissing the ball before delivering it and then the kissed and blessed missile knocking off the stumps. The birth of the Yorker King !!

Mali’s ODI debut was in Dambulla on 17 July against UAE in the 2004 Asia cup, the match saw the new kid in the house taking the wicket of Captain Khurram Khan and he ended with figures of 39 for 1 in 10 overs with 2 maidens.

3 years later was the 2007 West Indies world cup. The Caribbean festival world cup saw a strong built tattoo guy with a colorful hair throwing down toe crushers at the batsmen. The skinny kid was soon on muscles and it was a challenge for Ramanayaka who accepted it by building a strong personality in Malinga. More than his bowling the hot talk in the town was the hair and his physical appearance, it was a sensation that the cricketing world has never seen before. One would call as a thug in the gentleman’s name. Soon wigs were out and the fans soon started to facsimile his hair. The hair was the talk of the World cup until he decided to create a unique world record, just like his hair style this was something the cricketing world has never seen. 4 wickets in 4 balls! Yes, we heard it for the 1st time in 2007 and even after 12 years we still hear it in the name of Lasith Malinga. He took 4 wickets in 4 deliveries against South Africa where he almost won the game for Sri Lanka. The semis against New Zealand showed the class of the man. A scary, deadly bowler was born. Malinga’s first 4 overs just went for 5 runs with 2 maidens and the price wicket of Fleming but the bloke gave a horrid time for Ross Taylor, Taylor was scared, didn’t know whether to go back or front and there were lots of ohhhs an ahaaas around him. The Rathgama express has announced himself in style. He was later named in the team of the tournament by Cricinfo.

Lasith was a nightmare to the media over the years, to certain players, and to certain ministers. He was not afraid, he was direct and he talked straight, the guy was a warrior in the field with the ball in hand, a warrior off the field with his talking. He battled out his injuries all alone. It was the Rathgama nature, it was in his blood, the son of Separamadu Milton was a devil but fans loved it, he was a fan boy all around the world, the fans loved his style, his hair, his tattoos and what not. In fact he had the right to say anything. It was not the media who made him, it was his own talents that got him far so he definitely had a right to voice out.

He was a hot sale in the IPL and Mumbai Indians was his 2nd home, even after a decade he is still the loyal Bombay boy of the Ambani’s; the franchisee owners who never lost faith in the great man. Soon he was picked up in T20 leagues around the world. Simply he was the best death bowler, the most deadly bowler in the world of Cricket.

Mali, the only captain after Arjuna Ranathunga to win a World Cup for his country, he was the lucky charm of Sri Lanka Cricket that brought a World cup to the island nation after 18 years, thank you Captain Malinga !!

And with that my childhood players comes to an end. The slim guy who made a debut 15 years ago leaves the ODI arena as Uncle Malinga with a gained tummy