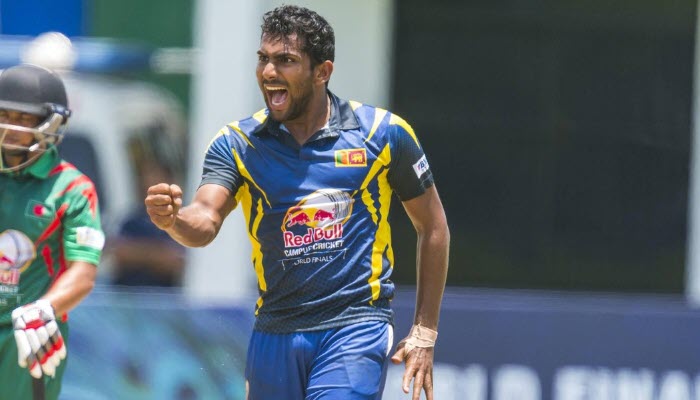 Its true that 20 year old Pathum Nishshanka is in the form of his life.

A first class average of 68 and 3 scores of over 150 in the past month and 2 of them being over 200 proves the talents and the skills of the young man.

Then there is Chamika Karunaratne, another youngster who has been performing exceptionally well in the first class circuit but receives less recognition for his work. It was him and Pathum that batted out of their skins in the Match against Ireland ‘A’ to save Sri Lanka from an unexpected loss.

Chamika’s all round performance adds so much value to the team.

Born as the youngest to a family full of Badminton players, Chamika decided that he needs a heavier instrument than a badminton Racquet His Father and 3 Brothers needs no introduction. Father a national player and a coach, Niluka a 3 time Olympian, Dinuka a national badminton champion and Diluka a national player. above all Chamika was different, what ever the instrument he took he was able to turn it in to Gold, be it the Cricket bat, the badminton Racquet or the javelin he made them his own. He was the Junior national champion for Javelin throw but he decided to excel in Cricket.

22, year old Chamika plays for NCC just like Pathum and he is nearing 1000 first class runs. Chamika bats down the order, having a first class average of 25.00 for someone who bats at number 8 is satisfactory; a century and 7 half centuries to his name proves that he is a reliable man and he having taken 59 first class wickets adds more value to his profile. A genuine all rounder in the making? reminds me of Mathews a few years back.

What does Chamika needs to do to bat the eye of the selectors?, or is he doing enough or does the selectors neglect him?

We have seen a number of youngsters performing well and apart from these two players there is Kamindu Mendis, Charith Asalanka, Shammu Ashan and Lasith Embuldeniya waiting to get the doors open to the national team. Lasith another Royalist and a NCC player just like Chamika has showcased his talents with the ball. 108 wickets in 18 first class matches with an average of 18.75 speaks a lot about this 22 year old slow left arm Orthodox bowler.

Have they impressed enough?, or is our domestic circuit up to the best competitive standard?

Lets wait and watch when these youngsters get their chance to play in the bigger stage and who does it first and who performs like in the domestic circuit.