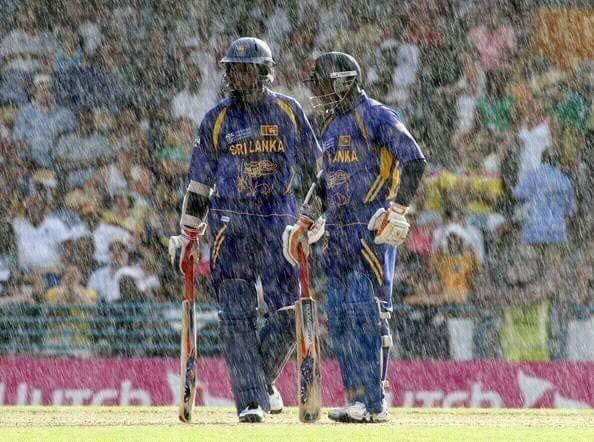 The emptiness that engulfed the Lankan cricketing fraternity after the 2007 World Cup final on a dawn that we wished didn’t dawn upon, is unparalleled. It’s not that Sri Lanka was robbed of what was deserved, but it’s the frustration that Sri Lanka weren’t even given a chance to have a shot at glory that hurt more. There were many things that had to go Sri Lanka’s way to halt the rampant Aussies, but unfortunately none went even remotely Sri Lanka’s way. Join on this journey re-imagining how it would have been had the proceedings went Sri Lanka’s way. Let’s embark on an endorphin elevating expedition.

Gilchrist bludgeoned the Lankan attack, helping the Aussies post a mammoth 281 runs In 38 overs in a rain curtailed game. 282 off 38 overs was a herculean task in that era. However only a year back the Sri Lankan opening duo of Sanath Jayasuriya and Upul Thranga had put on 286 in 32 overs In England. The attacks were non comparable, but that chase was a good enough reason to instill hope. However the openers were disentangled early in the chase bringing Sanath and Sangakkara together. There was still hope as Sanath and Sanga forged a potential match winning partnership, navigating the innings to 123 in 19.4 overs. However around this time the rain started appearing in the form of a drizzle, slowing the wicket down and making the ball stick on to the wicket making run scoring difficult. It was all downhill from there on. Many who watched the game believe the Duckworth Lewis equation and the conditions robbed Sri Lanka a good shot at the score. It was Sangakkara’s wicket which turned the tide.

As Kumara Sangakkara and Sanath Jayasuriya started to pile on the runs, the Barbados sun which was playing hide and seek all throughout the day, started to shine towards the afternoon. To put a lid on the scoring spree, with 158 runs required of 18 overs, skipper Ponting turned to Bradd Hogg.

As soon as Hogg came into the attack Sanath Jayasuriya tore into the left arm chinaman spanking him for three sixes between long on and mid-wicket. As the baffled spinner went wide of off Sanath provided no respite as he pierced the offside with precision notching three more boundaries. A thirty run over from the lead spinner left a gaping hole In the Aussie arsenal leaving, skipper Ponting looking for alternatives. The over literally broke the back of the chase leaving Sri Lanka needing 128 off 17 overs with 9 wickets in hand.

Ponting turned to his pace ace Shaun Tait to wrestle the momentum back. The move offered no respite as the other southpaw Sangakkara exhibited the opposite end of the batting spectrum delicately notching up boundaries using Tait’s pace. The second wicket partnership put Sri Lanka in a position of strength by the turn of the 30th over, propelling the score to 210 for one.

With 72 needed off the last 8 overs, a mix up between the duo saw Sangakkara returning to the pavilion. However Sanath carried on his merry way making up for the failure in the 1996 final. Ponting was left with no options and Sanath in Mahela’s company saw Sri Lanka home with an over to spare

As the gorgeous sunset encroached upon the Kensington Oval in Barbados, the Lankans had prevailed over the Aussies for the second time in the grandest of stages in world cricket. The sight of a multi ethnic team achieving the unimaginable was a moment to remember for a nation which was at the height of a civil war. The streets of Colombo were filled with celebrations and the sky was lit with fireworks. It was a dawn to remember for the tiny island, thanks to the maverick, Matara mauler.

The presence of the then president of Sri Lanka Mahinda Rajapakse at Barbados  was considered to be not only morale boosting to the team, but also a good luck charm, given the phenomenal result .This resulted in the President being routinely invited to ICC finals which Sri Lanka were part of, in years that followed. There were even fan campaigns in certain parts of the Island urging the president to be present for finals whenever possible. This inevitably led to animosity between Sri Lanka and Australia at diplomatic level because the Aussie premier John Howard was clearly annoyed by Mahinda Rajapakse’s new found enthusiasm in attending cricket as Howard wanted to be the only world leader explicitly showcasing support for his national cricket team.

Sanath Jayasuriya who had taken his popularity and fan following to a different stratosphere, dropped a bombshell on his return to the Island. In the presence of dignitaries and fans; quite the opposite of what he encountered at Heathrow a few months back when no one was there to pick him when he joined the Lankan test team in UK, Sanath announced he was bidding adieu to the game with immediate effect expressing desire to leave on a high. This sent ripples of shock waves across the cricketing community. The then chief of selectors Asantha De Mel sought the help of the president to influence Sanath to change his mind. Sanath obliged to president’s request agreeing to carry on till the T20 World Cup in South Africa, only a few months away.

the T20 World Cup was taken lightly by many nations. India took it to a different level by sending a team sans any of its seniors led by a lad who had discolored hair and bought up on milk.

Sanath was at it again smashing bowlers to all parts of the grounds in almost all the games. The Aussies who didn’t have enough time to recover from the World Cup thrashing suffered at the hands of Sanath in a crunch game at Newlands in an encore of Barbados. Sri Lanka went on to thrash the daylight out of India in the semis and edged out Pakistan in the finals on their way to being crowned the inaugural T20 champions. Two world titles in one year powered by a player who was forced to retire from test cricket only an year ago was in fact a fairy tale turn around

The World T20 win took popularity of the format to a different level locally. With Sanath bowing out of his international career as agreed upon prior, he was bestowed with the responsibility of heading Sri Lanka cricket. Quite aptly one of his first projects was the Sri Lankan premier league T20 tournament. The brainchild of Sanath garnered global attention as many corporates and billionaires from around the world invested in the teams. Given the small market in Sri Lanka the concept was taken up as a global tourney with each team consisting of 4 Sri Lankans 3 Indians and 4 overseas players. The tournament was held jointly in Sri lanka and India giving a new paradigm to the cricketing relationship. The partnership gave Sri Lanka cricket to become one of the most powerful boards in global cricket. Not only that SLC, had enough and more money that they spent lavishly building stadiums In every part of the country.

Meanwhile many of the wealthier nations tried to build their own versions of the T20 leagues but not with much success. The cricketing fraternity believes that let alone the quality, many of the leagues couldn’t even match the ending nature of the names teams carry in the Sri Lankan version.

Meanwhile true to the phrase ” you can take a man out of cricket, but can’t take the cricket out of the man” Sanath Jayasuriya returned to play in the first three editions of the SLPL donning the dual role of being a player and an administrator with success in a never seen before manner in world cricket