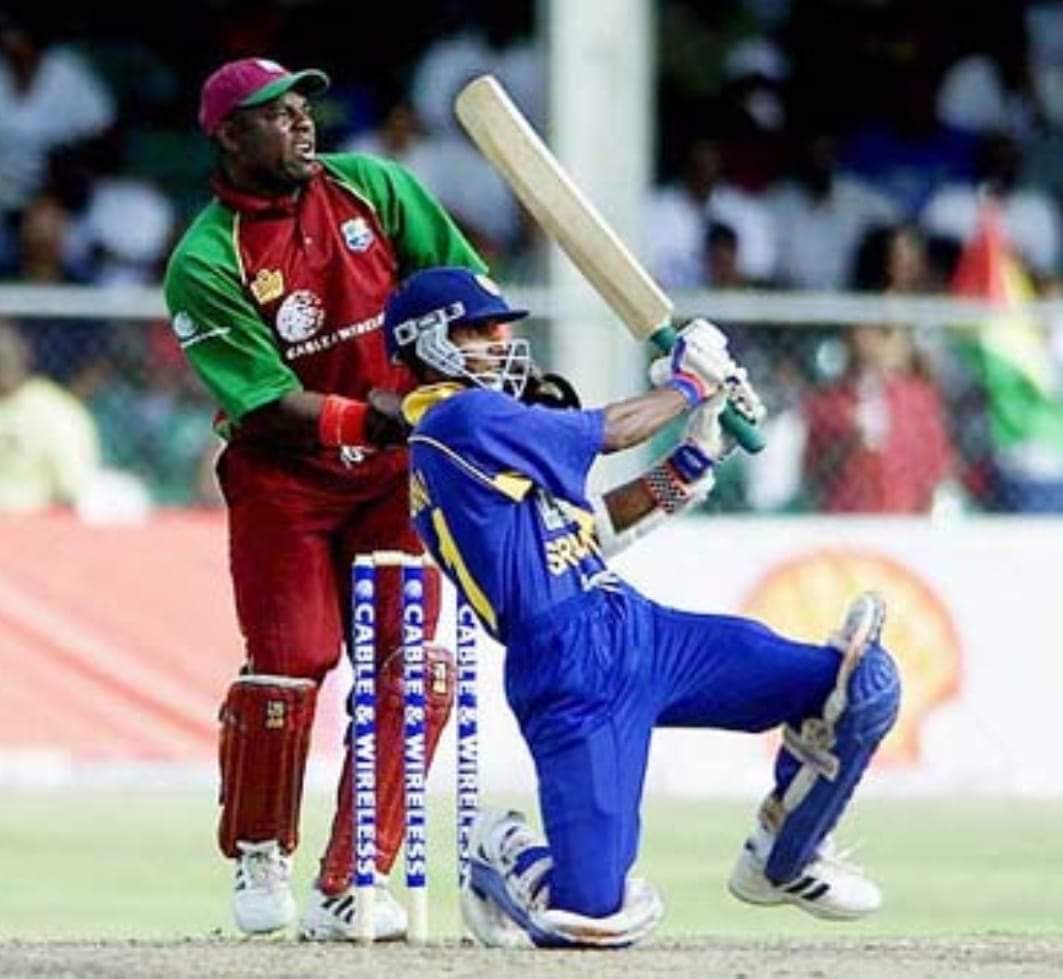 Any win in professional sport is special. But some are special. Victories which are achieved in alien conditions, orchestrated by unlikely individuals and those, which break a long drought belong to this category.

Bridegetown 2003 is one such instance where all of the above boxes were ticked but yet remains a distant outsider when recollecting memeroble moments in Sri Lankan cricketing history.

Cricket in West Indies was one of the most pleasurable things to experience until the mid 2000s. As opposed to the empty stands and the dull atmosphere experienced at present it was the exact opposite. Stands filled with passionate fans whose aura was unmatched, the nostalgic blue and white cable and wireless logo; the official sponsor of series’ in the Caribbean, and most importantly a team which was full of flare contributed to an unparalleled viewing experience. To add to that the 7 30 pm starts in Sri Lanka just made it a different experience.

However for some odd reason despite being a crowd puller in ODI cricket the Sri Lankan team had played only a solitary ODI or two, post 1996 World Cup win meaning except for a few for the rest the Caribbean, was an unknown territory. As a nation a series win in the land of calypso was still unticked.

It was in this backdrop that a Sri Lankan team under the reigns of newly appointed Marvan Attapattu embarked on a full tour of Windies consisting of 3 ODIs and 2 Tests in Mid 2003. The first of it’s kind for Sri Lanka in the West Indies. After a moderately successful world cup campaign followed by Sanath’s resignation, Kumar’s signs of baby steps in ODI cricket following first two tons in ODIs in Sharjah and Mahela’s re emergence following a horror World Cup, the Sri lankan batting was definitely not the strongest component in their armoury. This post World cup Flux was reflected in lack of interest amongst the local broadcasters who preferred the soap operas instead of the mouth watering classics that were brewing in the Caribbean.

Thus it meant the only resort to follow the series for those cricket tragics was only the news channels and the papers. This made the series even more special because before the emergence of cricinfo and smart phones, following cricket meant painstakingly waiting for that single moment where a clip was shown on a news channel, flipping through multiple bulletins within a 10 minute frame whilst tackling a annoying elder sibling (I know for sure my sister wouldn’t be even reading this long into this post ) and then waking up in the morning to bulletin on radio to hear the result, and that moment of anticipation is a feeling which words cannot capture. It was this backdrop that made this series a unique series.

Moving on to cricket, having gone 1-0 up in the series the previous day ( back to back ODIs on consecutive days was another unique feature back in the day and interestingly players like Vass still played for over a decade without any of the sophisticated workload management concepts) Sri Lanka had brought Upul Chandana in for a fast bowler. The West Indies possessed a batting line up consisting a young but dangerous Gayle, Brian Lara, a consistent Sarwan and an emerging Marlon Samuels following a successful tour to India in late 2002 where they had beaten the much fancied Indian team in a 7 match series. This meant Windies were a force to reckon with.

Batting first aided by Billy Bowden blunders giving lives to Gayle and Lara, Windies muscled their way to 312 in their allotted 50 overs. Chris Gayle showed glimpses of what the cricketing world was yet to see in full flow, whereas Brian Charles Lara treated Murali with absolute disdain characteristically sweeping and pulling against Murali’s prodigious turn and again proved he was one of those very few who had decoded Murali inside out.

Despite it being the Caribbean with small boundaries and a flat track,313 was a daunting task back then. With a formidable attack consisting of Dillon, Drakes Windies would have backed their chances given the fragile Lankan batting line up. The dynamic duo of Sanath and Kalu provided a fiery start compiling 72 in 12 overs followed by the characteristic slow down in the middle overs and loss of wickets in clusters. Mid way through the innings with Marvan back in the hut and Sangakkara struggling to keep pace as he did more often than not during his infant years in ODIs ( Kusal mendis fans take note ) the chase was as good as over.

In an unforeseen manner the John Dyson led think tank sent in in Upul Chandana who upto that point had bowled 4 overs and conceded 40 runs and didn’t do much of note in the field too. This was a surprise as Sri Lanka were not the team to think out of the box back then just like now.

The skinny Chandana was not anything close to the modern day bjg hitting all rounders. Despite being skinny to the core, wielding a bat which probably weighed fraction of his weight and no aura around him, he was the ultimate utility cricketer. Undoubtedly one of the best in the field Sri Lanka had produced, and more than a handful on tracks offering some assistance and consistently contributing handy lower order runs.

As cricket always does it provides those consistent under the radar performers their time under the spotlight for greater good. This was Chandana’s day our keeping pace with a 7+ required rate with clean strikes over mid wicket and covers with some exquisite lofted extra cover drives, flicks and pulls Chandana raced to a 71 ball 89 whilst having the legendary Mahela play a second fiddle in a match winning partnership. Of course he was aided by some sloppy windies fielding towards the latter part of the innings whilst eventually holding out in the deep with victory in sight. This was followed by a typical nerve racking ending facilitated by Mahela getting out but thankfully dilshan and dharmasena closing the chase.

313 chase down to achieve the first series win Caribbean that too orchestrated by the batting prowess of an often unnoticed all rounder made the victory special. The Caribbean flavour and the thrill of getting the news following morning through a voice on radio after a long wait made it even more cherished.

In hindsight Sri Lanka were blessed with the likes of Upul Chandana, Kumar Dharmasena and Russel Arnold who often went unnoticed yet contributed significantly a decade or two earlier than ideally when they should have emerged. Its beyond doubt that if those players had emerged around this time they would have been much much bigger than what they were and obviously we wouldn’t be celebrating solitary wins here and there like we do now. But just like in life In cricket too “ifs” and “but”s mean nothing but these memories do leave an indelible impression on our hearts.