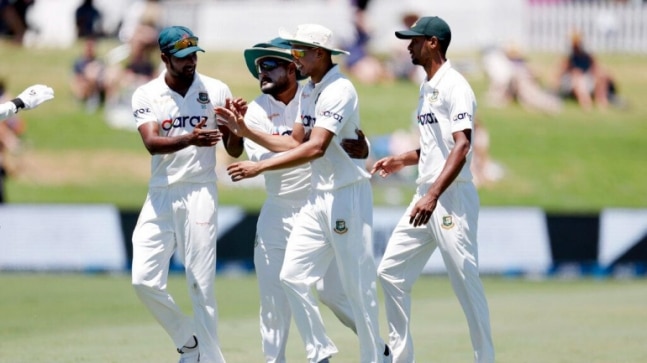 Bangladesh batters were undone by the likes of Trent Boult in the first innings of the second test. They were unable to pick the line, leanth or the swing of the mighty New Zealand pacers. This was a greentop pitch unlikely the one used in the first test were Bangladesh registered a historic win. Bangladesh had got all the confidence going into the second test match but were unfamiliar of the conditions leading to a mighty collapse in their first innings. Tim Southee and Trent Boult made the new ball talk and exploited the conditions very well unlikely the Bangladesh pacers who were not even close of what kiwi pacers did. Boult got a five-for and he also achieved the milestone of 300 test wickets by dismissing Mehidy Hassan.

New Zealand scored 521/6d in the first innings which brought Bangladesh batsmen under immense amount of pressure which they couldn’t handle and were restricted to a mere total of 126. They were put to follow on by New Zealand as they were still 395 runs behind.

After the collapse in the first innings Bangladesh showed a bit of resistance in the second innings were they batted little more conservatively and were able to pick the swing and seam of Kiwi pacers. The pitch might have lost a bit of seam movement after two days of play which made the batting a little bit easy. They also got familiarized to the conditions and the pitch behavior which made the a little more comfortable for them. They will be hoping to cross the 395 run mark to avoid an innings defeat. Liton Das has been the warrior for Bangladesh. He will be hoping to stay there as long as he could to avoid an innings defeat and give Bangladesh something to work with.

Kiwis are the hot favorites to level the series 1-1 while Bangladesh will take a lot of positives from this Tour going forward.