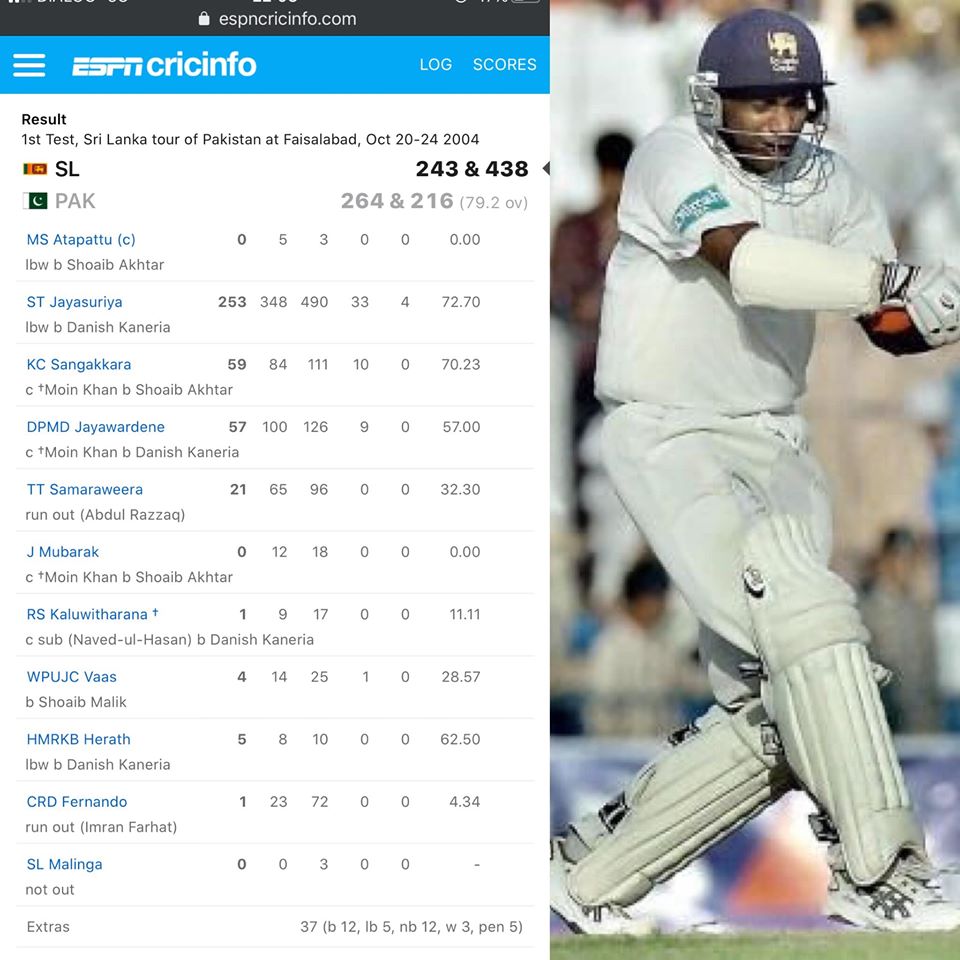 Test match number 1716, a double ton by Sanath, a 101 run 9 wicket partnership and a Lankan victory in Pakistan soil. 2004 October, Matara Mauler in Faisalabad !!Sri Lanka scored 243 in their 1st innings thanks to a century by Thilan Samaraweera. Pakistan made 264 and led by 21 runs.Sri Lankan didn’t start well in the 2nd innings with Atapattu going back in the very first over for no score but the Lankans recovered well with Sanath, Sangakkara, Mahela scoring half centuries. The score at one point was 3 for 309 but soon wickets started to fall at regular intervals which restricted the visitors to 8 for 337; 5 wickets went down for 28 runs.The opener Jayasuriya was on 165 off 267 deliveries and joining with him was the big opening bowler Dilhara Fernando.Sanath the Matara Mauler; bowlers worst nightmare.Sanath knew the innings would get over in a matter of balls but as we always say ‘attack is the best form of defense’ sanath decided to counter attack. One of the deadliest fast bowlers of world cricket Shoaib Akhtar was in the receiving end of a Sanath onslaught. Jayasuriya took Shoaib to the cleaners, he scored 4 boundaries off Akhtar in one if his overs and went to his 200 pulling a 143 KMPH Akhtar delivery for a six. Akhtar, just like many of the bowlers who received a Jayasuriya beating was clueless and almost in tears. He was brutally assaulted by Sanath, his 25 overs went for 115 runs and had an economy of 4.60 with sanath scoring 72 runs off him.9th wicket partnership;Dilhara Fernando’s contribution was just 1 run in a 101 run 9 wicket partnership.Incredible yet true, that’s how much Sanath dominated the innings and had a great sense when playing with the tail.The 9th wicket stand lasted for 17 overs; a 101 run partnership off 102 balls in 72 minutes.Jayasuriya contributed with 88 off 79 deliveries, Dilhara with 1 run from 23 deliveries and it also had 12 extras in it. Dilhara scored his only run in the 20th ball he faced and was unfortunately runout after facing 23 balls.This partnership helped the Lankans to move from 8 for 337 to 9 for 438 and the innings ended when Sanath was trapped in front by Kaneria. The Lions scored 438 in 109.2 overs with a healthy run rate of 4 and this handed over a target of 418.This was also the highest 9th wicket partnership for Sri Lanka until it was broken down in 2006 by Vaas and Kulasekara against England with 105 and then again later by Thilan Samaraweera and Ajantha Mendis with a 118 run partnership in 2010 against India. Currently this epic partnership sits at the 48th position of the highest 9th wicket partnership table.The innings of 253 in a total of 438; Sana on song,Sanath reached his 50 in 87 balls, 100 off 164 balls, 150 off 224 balls, 200 off 301 balls and 250 off 342 balls.His last 100 come in just 112 balls and the final 50 come in just 41 balls.The innings of 253 off 348 deliveries in 8 hours (490 minutes) included 33 fours and 4 balls went in to the stands. A total of 156 off boundaries which meant that 62% of his runs came off boundaries. Sanath had a strike rate of 72.70 by the time the inning ended. The master blasters Kookaburra was turned to a flaming sword.Match result;Pakistan was handed over a target of 418 but all they could manage was 216 runs which handed over a victory of 201 runs to the Lankans.Jayasuriya was the man of the match for his 288 runs, 1 wicket and 1 run out.