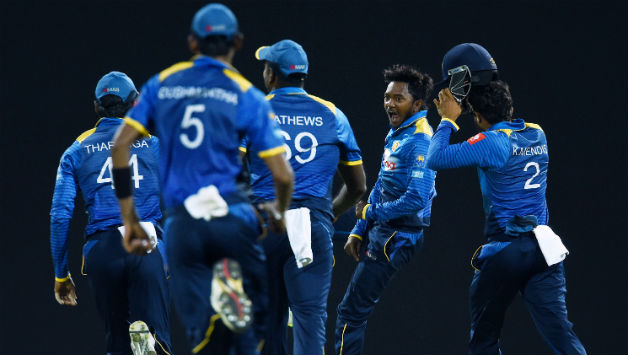 Dimuth has been one of SL’s most consistent & in form batsmen across Tests & limited overs over the last 12months. Throw in his clear potential to rally the troops as skipper and next to Mathews becomes an automatic lock in the 11. If he plays, he has to open in order for SL to best utilise his skill set rather than inserting him in a position that will force him to play away from his natural game.

DDS as opener. This may be controversial to some of SL’s fans, but if you look at the evidence it makes sense. Besides there are not many choices screaming out for selection right now based on recent form. The reasoning behind DDS as opener is if you look at his stats as opener, he performs considerably better when asked to open the batting (see table below) which indicates a liking for pace (something SL will face a lot in England). Those 8 games have come against a variety of opposition – Aus, WI, Zim & NZ and his average and S/R against all those teams are higher than his career record.

Dhanushka will be the back up opener in the side. His electric fielding and ability to bowl part time off spin helps him get a lock in the squad ahead of the others.

Missed Out – Dickwella/Thirimanne/Tharanga/Avishka Fernando – Thirimanne, Tharanga & Dickwella’s form with the bat don’t warrant a place in the squad. With KJP & Kusal Mendis (both decent keepers) in the squad, Dickwella can’t force his way into this squad through his keeping abilities either. Avishka was unlucky, as he’s probably the most in form of the batters out of these players that miss out and you could argue is in better form than Dhanushka but considering we are looking at a back up option Dhanushka provides more versatility with his ability to bowl off spin and is a better fielder enabling Dhanushka to possibly bat in the middle order as well if injuries hit.

KJP, comes in at the crucial number 3 position. All signs point to he will be fit for the WC. We have seen Chief Selector already rule out Shanaka & Gunaratne due to injuries so if KJP was struggling you would think he would have been ruled out too. After Mathews & Karunaratne, KJP is probably the next most in form batter SL has got. His innings in “that” 1st Test vs SA showed his maturity and ability to absorb pressure against some of the world’s best bowlers. Something that will be needed at the WC with every team putting their best foot forward in every game. In addition, his ability to keep the scoreboard moving along during those Powerplays is crucial. It allows Dimuth/DDS to keep playing their natural game and complements the batters around him. He will also don the gloves behind the stumps.

Kusal Mendis, one of SL’s most talented batsmen and probably one of SL’s most hotly debated batsmen as well. What can’t be debated though is his record which is strong. He’s been moved around the batting order a fair bit in the last 12-24 months but his record shows his best position is number 4 in ODIs (see below). His role will be similar to that of what Mahela Jayawardene did for SL for decades – be the glue at number 4, keeping turning the strike over before aiming to accelerate from over 35 onwards. He has been SL’s best fielder as well over the last 12 months which will be an immense benefit for Dimuth.

Angelo Mathews, is probably the only player that is a lock in everyone’s WC team. What will be crucial though is whether he will be able to bowl 2-5 overs per game as this will add a huge benefit to his value in the side. His experience alone will be a massive plus for the team and will be a great voice & deputy to Dimuth.

Oshada Fernando will be the back up. His recent form in SA warrants his selection in the squad. In addition his ability to bat anywhere from 3-6 provides versatility should injuries hit. Besides KJP, Mendis & Mathews are grafters and their job will be to keep the scoreboard ticking. Oshada does a very similar role.

Missed Out – Chandimal/Shehan Jayasuriya/Milinda Siriwardene – Chandimal has not been the best form and misses out even with his experience. Shehan Jayasuriya & Milinda Siriwardene are probably unlucky to miss out due to their recent runs in the SLC Provincial tournament but in the same vein it is hard to drop Oshada after he was probably one of the better batters during SL’s tour of SA.

TP & Udana are probable locks in the starting XI due to their recent form with bat & ball. Their ability to hit big will be in handy in Powerplay 3 and they have shown their ability to do that.

The most controversial selection is probably Kamindu Mendis at 6 compared to the likes of Shehan Jayasuriya, Milinda Siriwardene or even Jeewan Mendis. However my reasoning is Kamindu Mendis has shown enough talent to show that he deserves a place in the national team. His youth will bring a breath of fresh air and some much needed energy to the side. His fielding will be a huge asset to Dimuth on the field along with his ambidextrous ability with ball in hand. With SL’s recent history, our number 6 would possibly be required to come in much earlier than some other teams which will require someone with the ability to rotate the strike as much as power hitting. In addition, the experience of being part of a WC squad will do wonders for Kamindu considering he will be around for at least the next 2 WC’s compared to some of the older heads vying for a spot. In Mathews, Thisara & Udana there is plenty of experience heads around him as well.

Missed Out – Shehan Jayasuriya/Milinda Siriwardene/Chamika Karunaratne/Jeewan Mendis – As discussed above, Kamindu’s talent and youthfulness gets him a spot in the squad and starting XI. Chamika Karunaratne is probably the unlucky one to miss out but with TP, Udana, Kamindu, DDS & Mathews (hopefully) all able to share overs between them it makes it hard to find a place for him.

Akila gets the one spot in the starting XI based on his recent form and his mystery. He may have struggled a little bit on his return to the national set up in SA but he is still probably the best spinner we have to choose from. He still has a mystery about his bowling which will be hard to decipher for some teams. In addition, he can hold a bat if required and will prove handy down the order.

Vandersay gets the reserve spot in the squad based on his recent form after his last injury lay off. In addition, having a wrist spinner in your squad has become vital for successful teams in the recent past and even though Vandersay may not be a Chahal or Rashid he can still play a part in those games where it may be suited to more spin.

Missed Out – Jeewan Mendis/Lakshan Sandakan – Mendis seems to be inconsistent with his performances and doesn’t have age on his side, whilst Sandakan seems to be lacking form.

Only 3 out of these 4 will make the final 15, with only 2 of them making the XI. Malinga is an automatic pick which leaves Lakmal & Vishwa to fight out for the remaining 2 places which means one misses out. They all provide their own benefits which means choosing 2 out of those 3 will be a tough choice for the selectors. Lakmal with the new ball in seaming conditions has proven to be a more than useful bowler with his ability to move the ball off the seam. Whilst, Vishwa provides the left arm option that the squad does not have. For me I would go with Lakmal & Vishwa, with Lakmal winning the spot in the XI.

Missed Out – Nuwan Pradeep/Dhammika Prasad/Dushmantha Chameera/Kasun Rajitha/Asitha Fernando – Chameera is probably the most unlucky player to miss out out of these players due to his ability to generate raw pace. Rajitha has been amongst the wickets lately and is also unlucky to miss out. Pradeep, Prasad & Asitha Fernando haven’t quite warranted a place in the squad and would miss out.

And that’s it, my final 15 (&starting XI) for Sri Lanka for the 2019 WC. Within the starting XI, we have 8 bowlers (Mathews & DDS included) which gives Dimuth a lot of choice and variety. Within the reserves we have in form & different alternatives that allows the team to mould the team to suit the strategy required.

I believe with the above squad we should be able to beat the likes of West Indies, Afghanistan & Bangladesh and push the likes of Pakistan, New Zealand & Australia to hopefully sneak in to the semis.