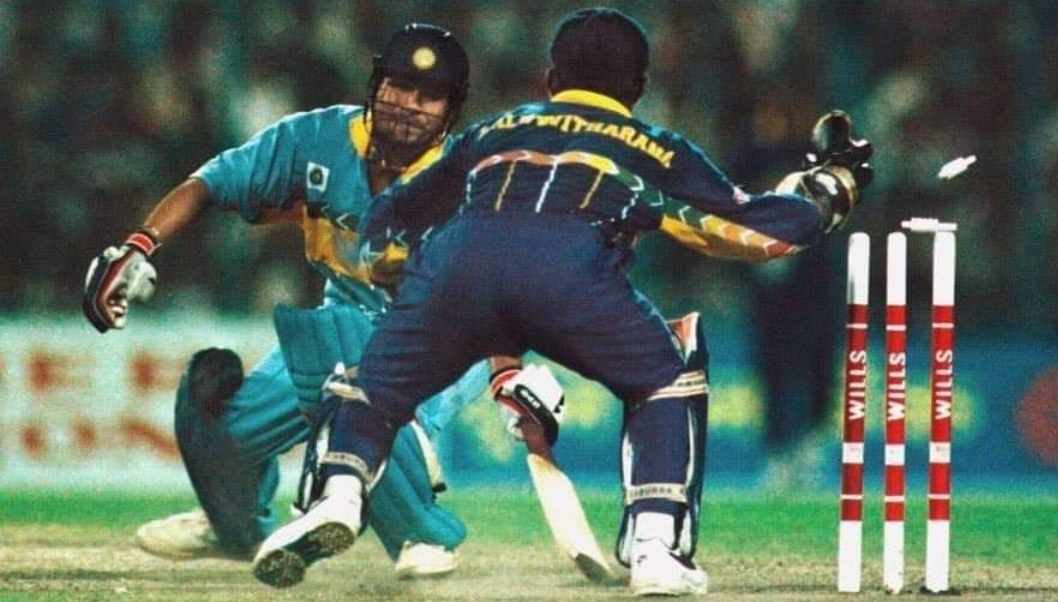 The unexpected vaccum that has engulfed the cricketing world has sent the fans into nostalgic mode, recollecting favourite cricketing moments of the past. In cricketing folklore it’s the euphoric moments that stand out often, understandably so. Arjuna’s glide to third man boundary in Lahore on a dewy night , Sanath’s airborne cut over  backward point on fading summer evening in London and most recently Kusal’s glide to third man in Durban,are some such pivotal moments which have lived and will live in the memories of Sri Lankan fans through pictures captured at those precise moments.

Those moments are special, but those moments were only possible  because of constellation of little moments before them that set the platform for those iconic moments to manifest. One such little moment which etched an eternal memory in Sri Lankan fans’ minds happened on a sultry night in Kokata more than 24 years ago, and i believe it’s a moment; those who witnessed it live and those who weren’t event born should at least experience at this moment through words and images.

Sri Lanka’s 1996 World Cup triumph is one of the most celebrated fairy tales in professional sport. A journey where a bunch of talented semi professionals punched well above their weights to over run the mighty superpowers in an  unprecedented ascent to the pinnacle which culminated with the ball passing the third man boundary at Gadaffi stadium. It was a moment which send millions into euphoria forgetting the turbulence the nation was experience at that point in time.

However none or this would have been possible if not for a moment of brilliance from a little man few days before the big day.

In the mid 90s Sachin Tendulkar in full flow was one of the most beautiful things in cricket. Kolkata 1996 was no different. Billions of Hopes were resting on that willow,which was middling every ball that was coming it’s way. Afterall only few weeks before, Sachin had decimated the Lankan bowling in Dehli pummeling his way to 137 sending the young Vass and Murali into the cleaners. The scintillating cover drives and trademark flicks from Sachin indicated that the dreams and desires of millions were about to evaporate into thin air.

With India at 98/1 in cruise mode, chasing 252 was just a matter of formality. But as it happens often in life it’s the little unattractive things which make a big difference at times.

A delivery sliding down the legside from Sanath, which Sachin would have nudged for a single right of short fine leg even in the middle of his sleep misses the bat and nudges the undersurface of a bulging thigh guard and innocuously rolls behind. Within a flash of an eyelid a little man picks up the ball whips the bails off and makes the cauldron at Eden gardens arguably the mecca of cricket ( well if you think its Lords which fits this description you haven’t experienced Eden Gardens in late 90s)  fall into pin drop silence. Arent those the moments that give goosebumps to any fan. It was one such moment. A moment when a single man made millions go silent and paved way for his team to have a shot a keeping the dream alive. There may have been many pivotal and high impact moments in the 1996 campaign but this for me was the moment that topped it all. If not for this little piece of brilliance nothing else would have mattered.

Apart from the moment when Malinga nailed Sachin in Mumbai in the 2011 WC final and stunned the audience no other moment comes close. Afterall when you reign over the big brother when it matters the most,it becomes very special.

As I mentioned at the start what we remember are the iconic moments. But not may by now would remember that if not for the piece of brilliance exhibited by Upul Chandana in running our Alec Stewart, Sanath’s iconic shot would never have come about. If not for Vishwa Fernando, Kusal Janith’s exploits would not have blossomed. We will tend to forget those moments because there we tiny bits in a bigger scheme of things, but Romesh Kaluwitharana’s moment of brilliance got captured luckily in this iconic picture and thankfully will and shall remain in limelight.

Afterall for many of the kids who grew up watching this lovely game in mid 90s little kalu was a superstar. He wasn’t the most consistent but he was definitely a crowd puller. From the exploits down under in 95/96 dismantling the Aussie pace attack, till his departure from international cricket he left many intriguing memories. But this was a cut above the rest, as it gave a nation a moment of goose bumps and made it believe again in a shared dream, which eventually came true.