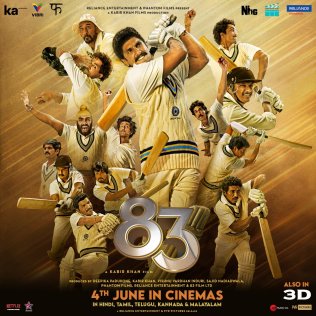 We all know that India won the 1983 World Cup in England, we also know that they beat the two-time world cup champions West Indies to lift the cup in Lords. This of course was a great achievement by Kapil Dev and his team. However, until I watched the newly released movie “83”, I didn’t truly know what the Indian team went through in order to win the world cup. They were disrespected by the journalist, organizers, commentators, and even by their own fans hence making it a truly remarkable journey by the Indians.

The beauty about this movie was that it wasn’t filmed like a documentary rather it was filmed as with real movie-style screenplay with action, comedy, and emotions that it kept me hooked all throughout the movie. The movie had everything you want from a movie yet it was able to do its intended purpose which is to tell and show the audience the remarkable journey of India’s 1983 world cup winning team.

In conclusion, I haven’t watched many cricket-related movies but this one takes the cake. This movie opened my eyes and explained to me, why the 1983 world cup win by India was more remarkable than just because they beat the West Indies. I highly recommend this movie to all cricket fans.