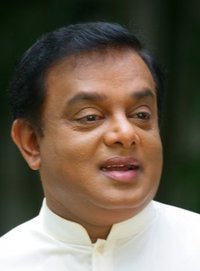 S. R. Pathiravithana in his weekly column on the Sunday Times feels that C. B. Rathnayake,  the new Sports Minister who was assigned the task recently by President Rajapaksa, has what it takes to clean things up at SLC.

Describing the state of Sri Lanka Cricket (the cricket board not the team), as a toilet roll doing it’s rounds around a wet, muddy, and flooded Colombo, Pathiravithana believes that incompetent administrators who previously held ministerial seats were responsible for much of the corruption and waste.

According to him, although Jayantha Dharmadasa was not perfect, domestic cricket operated as it should under the previous chairman’s watch, but Dharmadasa was forced in 2008 to resign due to Ranatunga’s "political somersault with an ulterior motive."

The beginning of the end

Even though Ranatunga hired an independent company to audit SLC accounts when he took over, and even though he made it publicly known that SLC was broke, with it’s bank accounts operating on a huge overdraft before his time there, Pathiravithana feels that Ranatunga’s appointment was the "first nail in the coffin".

Ranatunga acted in his authoritarian style and brought much disharmony in cricket and even bungled on issues that could have turned a niche in Lankan cricket. The way he handled the tour of England with the IPL issue was a huge faux pas; he turned a good concept into a cricketing nightmare.

At the end, no one in the right frame of mind wanted to touch Lankan cricket administration even with the wrong end of a barge pole. Bungling Ranatunga was taken out and the Minister Gamini Lokuge took over the affairs with the Sports Ministry secretary acting as his Pinocchio. Then after a few deals, Minister Lokuge declared his inning and handed the reins to former Sri Lanka leg spinner D.S. de Silva.

After the sports minister at the time, Gamini Lokuge, removed Ranatunga as chairman of SLC, the minister himself was involved in the signing of contracts and tenders on behalf of SLC. It is alleged that Lokuge profited by signing lucrative contracts with unscrupulous Indian broadcasters for paltry sums of money before appointing Somchandra De Silva as chairman.

Explaining De Silva’s involvement, or lack of it, Patharavithana writes, "Right now gullible de Silva sits on the throne while the next Ranatunga — Nishantha who is the secretary to the SLC Interim Committee — runs the show with a finger in every cauldron."

Indeed, De Silva’s name is barely mentioned in the media for any important matter pertaining to SLC. It is always Nishantha Ranatunga, who appears to be making the decisions in this committee.

Operating on a bank overdraft is not sufficient enough for this interim committee to want to end the needless waste. Paying wages to staff that have no outlined duties is surprisingly not unacceptable.

Furthermore, Ashantha De Mel who has held the position of chief of the national selection committee for over four years is flown to every country along with the Sri Lankan Cricket team. De Mel’s flight, meals and accommodation are all borne by a cricket board on the verge of collapse. His expenses for the last several years have been an utter waste when in this day and age his role can be fulfilled from Colombo through Video Conferencing via the Internet.

A cricket board on the verge of financial collapse needs to look into extreme cost cutting measures, not play India once every two months in order generate revenue to keep these characters well fed and happy.

The highly experienced, respected and proven Duleep Mendis who was part of the previous administration – still employed as CEO – does nothing these days but appear in photo shoots for the media; it appears as though he no longer has any involvement, or say, in SLC matters.

Paranavithana asks, "Why isn’t he given to function in his official capacity when he has a better qualification than NR [Nishantha Ranatunga] to function in that capacity?"

With that, S. R. Pathiravithana raises several more questions to the new sports minister that are sure to raise eyebrows.

Pathiravithana’s piece is a good article which Sri Lankan cricket fans should consider reading in order to understand the chaotic manner that our cricket is governed and operated. You can read the full article here.