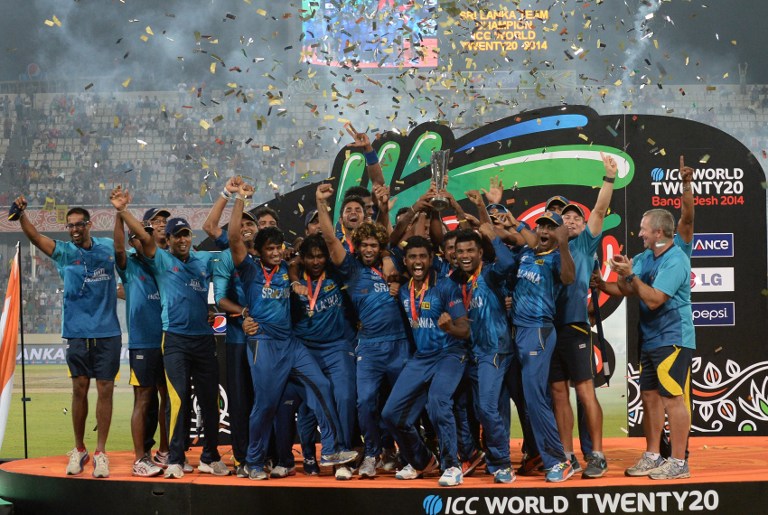 A week has passed. Now that we have, hopefully, got over the hangovers, let us examine dispassionately what Sri Lanka’s greatest cricketing achievement in 18 years has given us and what it is likely to result in.

Firstly, and rather obviously, it gave us a World Cup. Finally. It may not be the World Cup, but it followed four disappointments; and we were not going to be lukewarm in receiving it. Anyway, it is bigger than the pointless Champions Trophy, and if it was a quadrennial tournament, it might provide good competition to the 50-over World Cup, with its competitiveness, compactness and mass appeal.

The win also provided a fittingly grand stage for the exit of Mahela Jayawardena and Kumar Sangakkara. The two men who each captained two of the losing finals finally won under the captaincy of fellow great, Lasith Malinga. Those who pointed out that these were simply their T20 retirements and that such purists should be celebrated for their Test careers were missing the point. I doubt Sanga and Mahela would be sorely missed in the T20 team and I am confident that, years from now, they will not be boasting about their T20 records nearly as much as they do about their Test and ODI careers. However, this final provided us all an opportunity to bid goodbye to cricket’s greatest partnership in a World Cup final. Unless we reach the final of the 2015 World Cup, such an opportunity is unlikely to present itself ever again as Sangakkara, through his superiority in all conditions, looks set to outlast Jayawardena in the Test arena.

Thirdly, and in a non-cricketing sense most importantly, this victory saw Sri Lanka come together in its greatest show of unity in decades. A Tamil friend of mine who works in Mullaitivu told me about the celebrations that were initiated by the people of the town on that night. In Colombo I saw with my own eyes the amount of Tamils and Muslims savouring this achievement. I was too young to remember the mood around the country on the night of 17th March 1996, but I dare say there were more widespread and uninhibited celebrations this time around.

The 1996 victory came during a time of war when suicide bombs were routinely going off around the country. Understandably, the celebrations were raucous yet restrained. 18 years on, Sri Lanka still has many problems, but terrorism is not one of them and it showed. Men, women and children came out in their thousands to welcome the cricketers, who were travelling on an open top bus, even braving a steady drizzle towards the conclusion of the parade.

Hence this victory demonstrated Sri Lanka’s propensity to party. That Sri Lanka has one of the highest per capita alcohol consumption levels in the world is virtually unknown outside the island. Over the years cricket has afforded valuable opportunities to showcase our love of partying, often at important day-night matches at the Premadasa Stadium, most notably during World Cup 2011 and World T20 2012. Tuesday night’s parade was an opportunity to take the party to the streets, and we did not disappoint. I was there and can honestly say I have never seen a wider cross section of Sri Lankan society at the same place, at the same time and for the same purpose.

The cricket world has always considered Sri Lankans to be laid back in their support of cricket when compared to their neighbours. Our love of the game has never been questioned, but the word passion has more often been used when discussing India or Pakistan. Tuesday night’s public display of affection should also serve to put that notion to rest. We may not worship our cricketers as gods or stone their houses after a defeat, but cricket is still the one thing that brings the entire nation together, more so than any religious or cultural festival.

Over the past couple of years, efforts have been made by certain parties to paint the cricketers as a bunch of mercenaries. How ironic then that Sangakkara and Malinga, the two most often targeted in this manner, should lead the victory charge in the final. Just as the 1996 team achieved the improbable as paupers, the 2014 team clinched an overdue World Cup title as millionaires, proving that there is more than one route to greatness. On occasion Arjuna Ranatunga and his men have sounded a tad bitter about the riches enjoyed by the current generation but this should finally deprive them of any moral high ground. I wonder how many in that team would have passed off on a chance to play in the IPL, if they were offered million dollar contracts. Of course, I am not referring to a pre-emptive refusal of a “contract” when one is most likely to be warming the benches throughout the tournament anyway.

Leading on from the previous point, the cricketers are also likely to have their financial demands satisfied by Sri Lanka Cricket. Who is to say they do not deserve it after such a performance? Furthermore, his show throughout the tournament and particularly in the final against his nemesis Virat Kohli should make the public belatedly appreciate Malinga’s value and commitment to his motherland. What redemption for a brilliant player who, according to some fans on online forums, should have moved to India.

Speaking of India, I must admit that meeting them in the final had me worried for a while. Ever since the arrival of Dhoni as ‘captain cool’ we have had the hardest time beating India. We have got close many times, including the 2011 World Cup final, but India has always found a hero to save the day. It is therefore all the more satisfying that we beat Dhoni’s men to win the trophy and I hope it helps us break the India hoodoo. It is also curious that both our World Cup triumphs have been achieved by beating the one team that we really wanted to meet in the final, Australia in 1996 and India in 2014. Almost as if it was written in the stars.

So let’s savour this victory and stand with our heroes, not just in the good times but in their dark moments. Let us also hope that this is just the starter, and that the main course is reserved for 2015. Now if you will excuse me, I am off to watch the highlights of the match. Yet again…