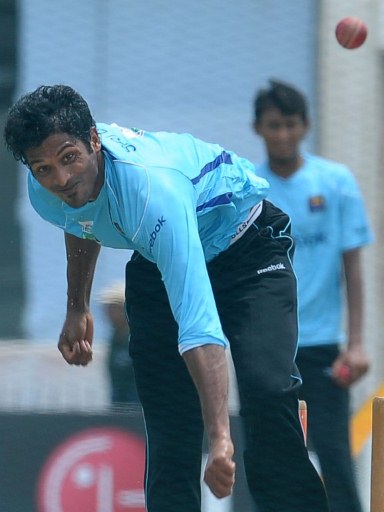 See out the new ball

Australia will come hard with the new ball and will try to get in the faces of the SL openers, so it’s crucial that Dilshan and Paranavitana see out the chin music. Being 50-0 at lunch is ok. 80-3 and you’re already trying not to lose the game. Dilshan will always have a go and that might be one way to win a Test but taking his time would mean getting the chance to toy with the token Aussie spinner late in the innings. Paranavitana does well at home and was steady in England, solid starts from him will pave the way for Sanga and Mahela to showcase their bromance in the middle.

Show some fight
It’s no big secret that the Sri Lankan lower order doesn’t contribute much. If Sri Lanka are serious about winning Test matches then that has to change. You cannot put a price on how important lower order runs are. Samaraweera and PJ will hopefully plug that gap with their solidity in the middle. And the rest of the bowlers will do well to show some balls and hang in their. The way Malinga threw away his wicket in the ODIs was appalling. Wear a few on the body if you have to but dont shrivel up like an old man’s Jonny. Put a price on your wicket. Make the Australians get you out. Because you can be sure as hell that Harris, Johnson, Siddle will fight it out like a motherf*****r. There shouldn’t be any easy wickets in Test cricket.

Bowl as a unit
Sri Lanka don’t have any genuine match-winning bowlers in the side anymore. So it’s time to make lemonade. Eranga, Welegedara, Lakmal, Prasad are capable bowlers, but aren’t of the quality of Malinga or Vass. At least not yet. It’s unlikely that any of the quick bowlers will dominate, so they all have to work together to bring down the Aussies. They face two very attacking openers, so they will always give you a sniff. Specially in the case of Hughes. Herath, Mendis, Randiv and Seekuge will all play an important role in chipping away at the exceptionally strong middle order. Hussey, Clarke, Marsh aren’t just going to bend over and let you have your way with them. Be Patient. But be at them with pressure and close in fielders all the time. Everyone has a breaking point. Specially in the Sri Lankan heat. Just keep pushing the buttons.

Pick the right attack
This is crucial. Three spinners or two? Three quicks or two? It doesn’t really matter if you get the personnel wrong. Welegedara has to play because he offers that extra incentive with the angle and his nip. And I would give Eranga his first cap purely on his performance in the ODIs. He showed he can swing it at a decent clip. And Sri Lanka will need someone like him who keeps the ball full instead of trying to bang it in. The 2 spinners have to be either Randiv/Mendis and Seekuge. Herath has been found wanting in the last few series and an avg of 37 isn’t really worrying anyone. Australian generally tend to play left armers quite well. I’d put Randiv ahead of Mendis because of the variation he adds with his bounce. On these slow dead pitches that is gold. Mendis has been on the wane and the Australians have started to figure him out little by little. On the other hand Seekuge has impressed us with his aggressive attitude and two wrongs that had Mike Hussey guessing. What more can you ask for ?