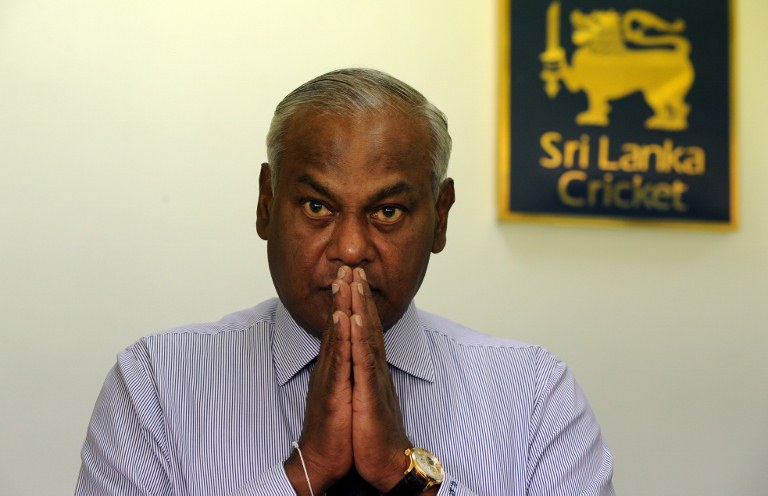 Upali Dharmadasa employed a sorcerer to exorcise "demons and other evil spirits" at SLC after he was elected. © AFP

Upali Dharmadasa somehow still managed to maintain a level of respect and dignity even though he shamelessly took part in a sham election that saw him elected uncontested as president of SLC. The election reeked of government interference and one had to be a complete imbecile to not realise that Dharmadasa was the trusted government ‘yes man’ in place.

Whatever respect, dignity and credibility he still managed to hold on to flew out the window after he wrote to The Island today with blatant lies.

Dharmadasa told BBC Sinhala recently that Carlton Sports Network was owned by the Sri Lankan president’s sons. It was a pretty significant admission and since BBC Sinhala is a radio show and they record their interviews – proof does exist that he said it.

Dharmadasa wrote to The Island in reply to their coverage of his admission to BBC. In his reply, he said "at no time did I make a statement to the effect that Carlton Sports Network (CSN) was owned by the sons of President Mahinda Rajapaksa."

Listen below to an excerpt of Dharmadasa talking to BBC (in Sinhala). He clearly states that the TV station, which SLC continues to award TV rights to, is owned by the Sri Lankan president’s sons.

Apart from this, apparently oblivious to the fact that sports minister Mahindananda Aluthgamage wants to impose a two year ban on players who refuse to sign contracts, Dharmadas told The Hindu this week that the story was a conspiracy hatched by the media to create "pressure" on SLC.

The Indian journalist too appeared to be unaware that Aluthgamage intends on introducing such a ban and that he had made it known to two independent media outlets over the last several days.

Aluthgamage told Sunday Times in Sri Lanka that Lasith Malinga being unhappy with the contract that will be offered to him and the possibility of him not signing that contract led him to this new policy.

Here’s a little snippet of this latest ridiculousness led by Dharmadasa’s ignorance,

Mr.Dharmadasa said that when the issue of player payments has already been sorted out, there was no question of any player being banned or being proceeded against on this count. “I think with the forthcoming India series, this is some kind of a build up…They [the media] are trying to create pressure on us [Sri Lanka Cricket] and on Malinga. This will not work,” Mr.Dharmadasa told The Hindu.

Mr.Dharmadasa said that Lasith Malinga is not worried or perturbed by the negative publicity that his contract issues have generated in the Indian media and elsewhere. “It is not fair to attempt to demoralise a few key players and Sri Lanka Cricket when all issues between the players and us has been sorted out,” he added.

The Indian media and some cricket portals had speculated on their websites that Sri Lanka could ban Lasith Malinga over his refusal to sign a contract with the Board.

What a joke! Does it not depress you that these people are in charge of our beloved sport?

And despite what Dharmadasa says, SLC still owes the players money. Because of unpaid dues from the last contract period, SLC have been unable to get players to sign contracts for this year.

"We have told them clearly that the previous year’s contracts have to be honoured before signing a new contract," Ken de Alwis from the Sri Lanka Cricketers’ Association told Sri Lanka’s Daily Mirror.

"I am not too sure on the total outstanding figure. But they have to pay for February, for the Asia Cup and for England’s tour of Sri Lanka."