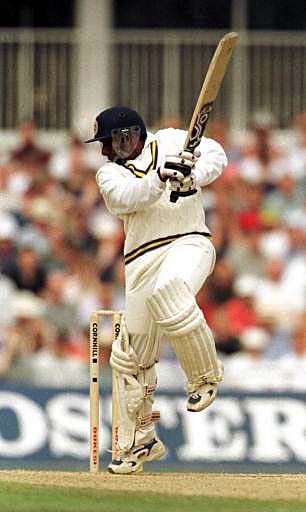 When we speak of Aravinda De Silva everyone will remember this individual for the attacking brand of cricket he played and for the flashy cars he drives.

This player in my mind was one of the firs,t or if not the first crop of unorthodox cricketers ever to be produced by Sri Lanka in the 80’s era. A batsman who made his debut in 1984 against the English at Lords went on to become one of the most successful and most powerful batsman and one of the most prolific run scorers to ever play for this tiny island.

I remember as a young 11 year old in England, Aravinda captained a team of amateur cricketers, and set the grounds at Lords ablaze with his electrifying batting, I stood in awe and admired this great man for he went to score 40 odd runs in less than 30 odd deliveries. His batting made the English attack which was spearheaded by Ian Botham, Phil De Freitas and co look merely ordinary.

He went on to better his batting in the years to follow due to a stint he had with Kent County. This stint with Kent went on to make Aravinda a more mature and astute cricketer which helped sri lanka to become world champs in 1996. He will be more or less remembered for that great back to the wall innings he made in Calcutta when Sri Lanka was 2 wickets down for nearly nothing on the board, that innings was worth more than a mere 66 runs.

Aravinda middles the ball from the word go with over 25,000 Indian fans screaming against the Lankans, however this man kept Sri Lanka in the hunt and took them to a World Cup Final, and like most great legendary batsman Aravinda saved the best for last when he made a brilliant century to guide this tiny island to what was its first World Cup win. Aravinda was one of the games finest pullers and hookers and he has proven himself on the bouncy pitches in Perth Australia where he virtually took part one of the game’s best fast bowlers in Jeff Thompson.

I was lucky enough as a teenager to be introduced this legend of our times by my uncle. He was not only a humble individual but a cricketer who never said no to autographs etc. A man with a keen eye for cricket would only be beneficial to Sri Lanka cricket in the future, as I consider Aravinda a national asset and a great ambassador of the game of cricket in Sri Lanka. Long Live Aravinda!