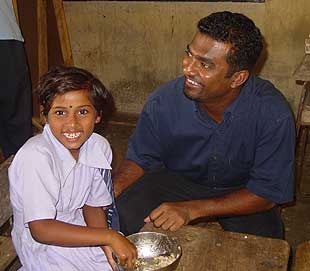 The history books will forever remember Muttiah Muralitharan as one of the greatest ever, if not the greatest, bowler to have played the game. But former assistant coach Paul Farbrace shared another side of Murali that others may not know of.


"He spends a lot of time at orphanages in Colombo. He gives an awful lot of money and time to these places," Farbrace told BBC.

Farbrace served as Sri Lanka’s assistant coach from 2007 to 2009 and spent a lot of time with Muralitharan behind the scenes.

He reminisced fondly on one particular incident involving Muralitharan’s generosity,

"On a young lad’s second birthday, instead of buying him lots of presents, he took all 100 kids from the orphanage to a water park because he thought that was the best way of spending his money.

"He is a really kind hearted person and I think many people are genuinely delighted that he’s done so well."

After the Boxing Day tsunami, Muralitharan and his manager Kushil Gunasekera helped create countless tsunami success stories on the island, assisting the impoverished affected by the tsunami get back on their feet. Where the government and other more prominent NGOs failed, the Gunasekera-Muralitharan partnership managed to provide thousands with permanent shelter. More importantly, they constructed sustainable communities equipped with play grounds, swimming pools and computer labs for tsunami survivors to rebuild their lives.

"For once – in honour of Muttiah Muralitharan’s freshly minted world record – do not look him up in Wisden or on Cricinfo.com. Instead, try www.unconditionalcompassion.org. There, you will get some idea of the charity work that Murali and his agent, Kushil Gunasekera, are engaged in. Of course, some of the biggest villains in history have embraced charity for other purposes. But for Murali his concern is genuine," writes Paul Weaver in the Guardian highlighting the work done by the duo.

When asked last week what his other interests in life were, Muraii said: "Charity". It is perhaps why Muralitharan is loved by all on the island; by cricket fans and non cricket fans alike.

Charlie Austin writing in 2005 for Cricinfo tells us that the benevolence didn’t end even on the week Murali was to wed,

On Sunday, Murali travelled to Seenigama, a small fishing village on the west coast that was pulverized by the tsunami waves, to officially open Nandavathi Kumara’s new home. Nandavathi’s husband tragically died weeks before the tsunami, which then swept away her home and with it all hope for the future.

But fortunately for Nandavathi and her fellow villagers – many of whom crowded around Murali lighting firecrackers and playing drums as he opened the home – Murali and his manager Kushil Gunasekera have been running a community-based charity called the Gunasekera-Muralitharan-Vaas Foundation during the past two years.

"His life has been taken over by the disaster and he has an almost evangelical desire to help those that are suffering,"  Austin, who travelled with Muralitharan to all corners of the island helping tsunami victims, recounted at the time.

"Murali signed up as a World Food Programme ambassador last year. The agency would have hoped for a couple of photo shoots and the odd public appearance.

"But they got a crusader, not an ambassador."

A few weeks before he decided to retire from Test cricket, the Times of India reported that Muralitharan found himself in front of a homeless woman who had approached him for money.

She had a child in her arms and, immediately recognising Muralitharan, started begging persistently for help. Muralitharan forked out a handsome sum, got on the phone to his manager Kushil Gunasekara, of the Foundation of Goodness with which Murali’s philanthropic activities are associated, and asked, "Why do we see people like these in our city? I don’t like it. What can you do about this child?"

Gunasekara, the coordinator of the immense tsunami relief work Muralitharan has been involved with, runs an orphanage as well, and says he got to work immediately. "He was insistent and not just complaining, he wanted some action. I contacted the local police station and they found out the child had been kidnapped and was in the process of being sold. The lady was a known scamster. They were nabbed in the nick of time. We were being too idealistic, and perhaps a bit naive. But that’s Muralitharan for you. The man has a vision, and he refuses to either become cynical or be cowed down," said Gunasekara.