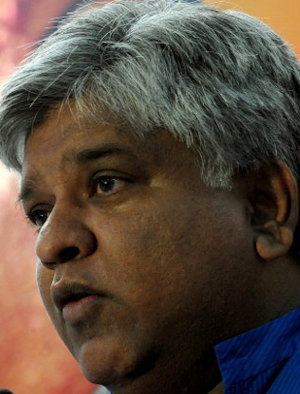 Arjuna Ranatunga remains a central figure in Sri Lankan cricket long after he retired from the game. Without a doubt he was a one-of-a-kind, a street fighter, a charismatic leader, shrewd tactician and a loyal servant to his country.

A lot has been said and written about his contribution to Sri Lankan cricket, none perhaps as eloquently as Kumar Sangakkara did at Lord’s last year. It was also indicative of his stature, as well as slightly amusing, that Haroon Lorgat thought his own report on Sri Lankan cricket was incomplete because he could not talk to Ranatunga, in spite of the fact that he had spoken to three-dozen others.

If you go by his good days, you would think that he is the Messiah our cricket needs today. And it’s starkly apparent that we do need one, be that Messiah be in person or in good systems and processes.  In spite of such a dire need, many are sceptical of Ranatunga taking a leading role in Sri Lankan cricket. That’s a real shame.

In the 80s, when I was growing up, I remember listening to the commentary on radio in a quiet corner room of our home with my brothers, far from the disapproving glare of my dad.  Premasara Epasingha or Palitha Perera would keep us on the tips of our toes, riveted and hunched over the radio, our ears not more than two feet from the speakers, lest we miss for a second the fall of a wicket or a four.  At that point in time, it was probably easier to entice me to worship at the altar of a cricketing hero than to eat an extra konde kavum during Avurudu. I liked Madugalle too, but tragically for our budding relationship, the girls also liked him, mostly or purely for non-cricketing reasons. It was a bridge too far for my fan pride to have a hero in common with the shallow ones who didn’t know the difference between seam and swing.  (Me: I like cricket and Madugalle is my fav player, Girl: Me too, he is sooooo cute, Me: puke uncontrollably). That would have been too much of an insult to my perceived cricketing nous.

I was probably a sucker for a heroic tale, and what is more heroic in cricket than the story of the school kid who walks into the national cricket team for his country’s inaugural Test, against the archenemy; and scores the first Test 50 ever for Sri Lanka. Perhaps I was naive too, believing that he would take us home in any chase as long as he was at the wicket.

Now, if you force me to check the facts, I am sure that we didn’t win as many matches as I remember, but it’s one of those myths that sits so comfortably in my mind, and mere facts are impotent to challenge.

Ranatunga was also a man of the masses, thumbing his nose both at the white man and the Colombo elite clubs alike, a fighter for a country with a real island mentality. The 1996 team was an epitome of meritocracy, talent harvested from all possible corners of the island, and at the centre of it all was a monarch who gave us belief and pride.

When he wagged his finger at Ross Emerson, that was not just an individual finger, but the conscience of an entire country standing up for itself, a sword brandished against insult and injury.  I still don’t care that it was ungentlemanly, rude, against the rules, yada yada yada. The Aussies had it coming. Darn it — it might have been against the spirit of the sport, but it definitely was the spirit of a country.

On the other side of every peak, however glorious it might be, lies a decline, and such had been the case of our enamourment with the king. We had heard the rumblings of discontent before, irritatingly whispered in my ears too frequently by my bro who was the team Gura, but the 1999 World Cup campaign bared it all out to see.  We heard of a domineering attitude, an unforgiving and petty streak. There was a Ranatunga renaissance when he gamely played on under Sanath Jayasuriya, and there was a lot of hope when he took over the helm at SLC.

However, he was unsuccessful and his tenure brief, whatever the reasons maybe. Ideological purity influences our minds more than we think, but at the end of the day, we yearn for the ability to compromise and display pragmatism in the people who wield power. We recognize the truths in the very critical positions he takes, but we wonder whether he has burnt bridges with too many stakeholders. We look at the money-driven landscape of modern cricket and wonder whether Ranatunga is a dinosaur from an earlier time.

Hopefully, the second time is the charm, and Ranatunga, wiser to the challenges and the opportunities, operates in a more diplomatic tone. Perhaps it is wishful thinking of a fan who refuses to let go of old loyalties, but I sincerely believe we need the man who wagged the finger and we need him now.