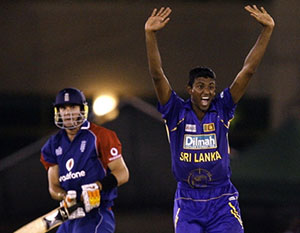 Sri Lanka’s lack of confidence and unspirited showing in the World Cup final ultimately did them in then. Battered by the ensuing, inevitable, match fixing allegations (compounded by Hashan Tillakaratne’s claims) and set back by a slew of resignations, SLC was in a state of limbo. Once Tillakaratne Dilshan took over as skipper, the concerns faded with the England tour nearing. Sri Lanka are expected to struggle in the foreign conditions, particularly in the Test series, but there is reason for excitement in regards to the ODI portion and the future of the limited overs side.

Exhibit A: The allrounder stable. Sri Lanka have always enjoyed the convenience of having allrounders in the squad (Dilshan, Jayasuriya, etc.) to provide flexibility, but now the allrounder option has overflowed into a luxurious problem.

Angelo Mathews, next in line for the captaincy, is well established in the lineup. His medium pace will occassionally bag wickets but his spells more importantly consume overs and ease the burden on the specialists. Mathews may not make inroads often but expect the unexpected from this intelligent cricketer when he’s given the ball, evidenced by his opening over against the West Indies in the 2009 Twenty20 semifinal (nabbing three wickets to cripple the Windies). Mathews is an even more potent batsman, mature and steady while oozing class in the middle order. Look no further than his 77 (not out) carrying Sri Lanka to a historic comeback against Australia at the MCG last year, to taste what Mathews brings to the table.

When Mathews was ruled out of the World Cup final Sri Lanka’s chances were dealt a huge blow, but Thisara Perera did more than fill the void. While you can question the selection changes made for the match, it would be hard to argue that Mathews presence instead of Perera would’ve significantly altered the outcome. Perera’s explosive cameo of 22 from nine deliveries helped lift Sri Lanka to a competitive total of 274 and although he only took the wicket of Gautam Gambhir the Sri Lankan bowling attack as a whole was very mediocre (save for Lasith Malinga). Another youngster, Perera has shown against the likes of Australia and India on previous tours his ability to finish the innings with fireworks, and has fruitful raw pace that can be refined.

Following the final, this new selection committee would have to be wondering how they could possibly squeeze in Perera to feature in the eleven alongside Mathews. Perera is already filling in for the recovering Mathews in the test squad. Now, the resurgence of Farveez Maharoof gives them even more food for thought. Maharoof is shining early into his stint in the county cricket arena, not as much for his bowling as his monstrous hitting. Smashing Lancashire to victories and making headlines, Maharoof is pushing the envelope for a definite return to the squad.

Maharoof is cemented in the team for at least the Test series due to other injuries. If he does capitalize on this chance, the selectors have a real conundrum in picking a ODI and Twenty20 XI. Right now, both Maharoof and Perera are playing in the first Test. Once Mathews is healthy, presumably by the ODI series, he’ll slot right back in to the lower middle order. Which begs the question, what if Maharoof and Perera do thrive? Should they both earn their place going forward, Mathews is back in the mix, and they’re able to collectively stike a balance with ball and bat, Sri Lanka can really flourish.
This may be just speculation but there is no denying Mathews is set in the lineup, Perera is becoming a regular in the squad and Maharoof is certainly on the rise and deserving a call.

Cushioning the loss of Murali will be the arrival of slinger Nuwan Pradeep. Stuart Law has tapped him as the future in the fast bowling even though he is yet to play an international, which speaks volumes about his talent and potential. Taking Law’s word for it, expect Pradeep and Malinga to form a lethal tandem. Behind them, it’s a toss up. Another quick can emerge or depending on how the spinners perform Sri Lanka will complete their bowling unit.

But if Perera and now Maharoof continue to succeed they can join Mathews to make an intriguingly versatile Sri Lankan team. When the time comes for promising batsmen Dinesh Chandimal and Lahiru Thirimanne, this allrounder entity can move down to anchor an always unstable middle lineup. If more bowlers progress then the group could move up (Mathews especially could comeout earlier).

Just Mathews and Perera would be enough, but Maharoof’s rejuvenation offers Sri Lanka an unheard of possibility to field three pure, genuine allrounders and help them prosper.