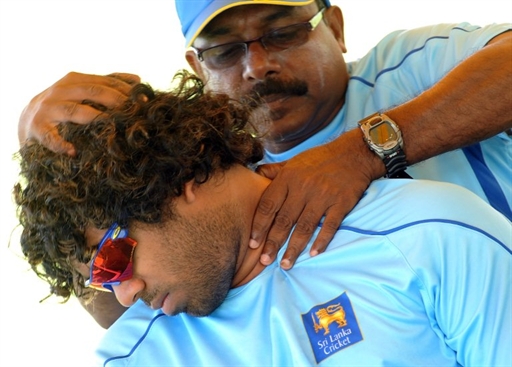 I recall watching a documentary on Ajantha Mendis where Subramanian Ramakrishnan from Sports Mechanics India, a company that has assisted the Indian cricket board with video analysis technology, explained how the Indians managed to work out Sri Lanka’s mystery spinner Mendis.

Ramakrishnan utilised video footage to demonstrate how they had identified and mapped Mendis’s mannerism to each of his variations. India had spent hours analysing Mendis’s every move from his behaviour at the start of his run-up to subtle changes in his bowling action. Imagine being able to pick Mendis’s carrom ball at the start of his run up? Threat neutralised.

Sri Lanka’s only remaining match-winner with the ball Lasith Malinga, one of the best ODI and T20 bowlers in the game currently, has been ineffective against India; have the Indians worked him out as well?

Could it be that India, like they did with Mendis, have identified a pattern or a change in action that helps them pick what length and speed Malinga is about to bowl? Perhaps not. Maybe it’s a case of identifying the best scoring areas against him with the use of technology. It is true that a bowler with an action like Malinga’s can be erratic and have the odd day off. But Malinga has earned a reputation of being accurate, miserly (he is often referred to as a death-over specialist) and a match-winner. Therefore, his poor showing against India has become extremely hard to digest for many Sri Lankans.

ODI and T20 cricket these days is immensely competitive, any team can literally win a match on their day. In what is a closely-fought sport today, teams with better resources are investing heavily in gaining a competitive edge through technology. Video analysis of the opposition’s bowlers is just one tool out of many that is available to teams like Australia, England and India. These teams have gone from a single individual working as a video analyst to recruiting a number of individuals to form a team of video performance analysts in order to give their players an advantage on the field. But what appears to be the key to it all is having an individual behind the program, like Ramakrishnan, who understands the game and the team’s needs to dissect the wealth of information technology provides.

The technology allows coaches to instantly access replays of deliveries on a hand-held device such as an iPad to provide more informed advice to players during a practice session. It can provide replays of a delivery from several different cameras, and can be used to monitor six nets simultaneously.

According to former Indian fast bowler Javagal Srinath, who is now the secretary of the Karnataka State Cricket Association, "in 10 years coaching will be meaningless without technology like this."

The gap between international cricket and Sri Lanka’s domestic cricket meanwhile continues to widen. It is no secret that Sri Lanka’s domestic structure is weak and first-class cricketers from the island take longer to acclimatise at the highest level, when compared to nations with strong state and county competitions. With technology giving Sri Lanka’s opposition an advantage and Sri Lanka’s financially-crippled cricket board unable to invest in similiar technology, the next generation of players will more than likely be facing an uphill battle when their turn comes.

For many years prior to the ’96 World Cup win, Arjuna Ranatunga and Aravinda de Silva formed the backbone of the team. The duo were often the top scorers in most matches, whilst the the rest of the batting showed promise but collapsed. When the likes of Sanath Jayasuriya, Hashan Tillakaratne, Roshan Mahanama and Asanka Gurusinha began contributing regularly and when Muittiah Muralitharan and Chaminda Vaas were able to form a competent bowling attack, things began to change for the minnows. By the mid-90s, Sri Lanka had more than just a couple of players forming the backbone of the team and the transformation to World Cup champions was taking shape. But what’s in store for Sri Lanka in the next decade when their mainstays retire?

Life after Muralitharan has been tough but it may only get harder. The likes of Tillakaratne Dilshan, Kumar Sangakkara, Mahela Jayawardene and Lasith Malinga – the backbone of the Sri Lankan team – may not have a Jayasuriya-like extended shelf life. Sri Lanka’s next generation of players, who are faced with a board that continues to fall into massive debt, cannot expect their coaching standards to match those in India and Australia any time soon either. Future Sri Lankan cricketers will not only be battling their traditional demons – seamer-friendly conditions and highly-skilled opposition – they will also be pitted against opponents who, with the aid of technology, are better prepared than they are.