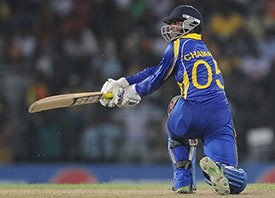 Many may have watched this game, and seen a terrible performance. But after the initial heartbreak, there were quite a few positives to take away from it, setting aside the (almost) inconsequential matter of the loss.

A lot of crticism has been leveled against Chamara Silva for his slow paced innings, but blaming Silva for this loss is unwarranted; he may have been slow at the start, but he was the man who kept the Sri Lankan hopes alive until the end.

In the context of this match, his innings may have been less than satisfactory. But in the bigger picture, this is exactly what the Sri Lankan side needs; a dependable middle order batsmen who can hold things together.

Chamara Silva managed to do what the other Chamara consistently managed to avoid, which was to construct an innings. His position in the lineup may need a slight tweak, though, as both Samaraweera and Silva are both pretty similar batsmen, with a penchant for spin and the ability to play a long innings – albeit at a slower pace.

Angelo Matthews, as everyone knows is a quality batsman capable of changing gears when required, and he could be elevated to play after Samaraweera, when the situation demands it. His talent is underused as a pinch hitter, and he should be given the opportunity to get his eye in, without having to come in and slog mindlessly at the death.

When analyzing the team performance on Saturday, we have to keep in mind that Sri Lanka were chasing on the fickle R. Premadasa pitch, under lights, and coming so close, heralds good things for the upcoming matches, where the toss might not play such a huge part in the outcome.

The bowling was also without the slightly prima donna pace spear-head, Lasith Malinga, who would have doubtless been more econconomical than the inexperienced Thisara Perera.

However, the ever dependent Kulasekara was also slightly wayward and went wicketless, which would present some interesting selection issues for the next few games.

Do the selectors go with the experience and (usually) economical Kulasekara, or the more potent wickettaking ability of Thisara Perera, who can also biff a few out of the park like no other?

Another good sign was the Sri Lankan bowling at the death overs; Kulasekara came back from a bad start to deliver a stunning last over, full of pinpoint yorkers and Muttiah Muralidaran showed signs of getting back to his unparalleled best, even though he didn’t manage to rip through the batting line up as he did in his prime.

His form had been a slight worry in the build up to the World Cup, as he was slightly underwhelming in his recent few matches, returning a total of 2 wickets at 42.00 in the recent series against the West Indies and taking 2 wickets in 2 matches against Australia, giving away 66 runs in his total 16 overs. His return to form would be a great relief for all the Sri Lankan fans.

It may have not been the emphatic start to the World Cup against the big teams that most Sri Lankans would have expected, but this match may turn out to be the eye opener the SL team needs to spark a turnaround to their campaign. With a little bit of luck and some elbow grease, this team could yet go on to lift the World Cup for the second time.